Our annual pilgrimage to Geek Mecca (aka San Diego Comic Con) began yesterday morning (Weds. July 19th) as we arrived at our hotel (Springhill Suites, Marriott, San Diego) around noon, unpacked our stuff, ate, and Jules immediately went down to Preview Night down at the convention center.   I, feeling a bit more infirm than my wife, pretty much collapsed in the  hotel room like (to quote Gene Wilder in “Young Frankenstein”), “a bunch of broccoli.”  My arthritis was flaring up, and so help me, I think I was having a genuine senior moment; I really needed a nap in the worst way.  I also seemed to be sprouting a third eye on my forehead… no joke, it was a disgusting little lump that luckily subsided the following morning.

So I stayed at the hotel, since I really had nothing in particular I wanted to buy at Preview Night, save for a copy of my friend Nick’s new graphic novel, “Pigs Might Fly” (which my wife bought for me… thank you, Jules!).

Jules relayed sights/sounds to me via her iPhone.  She toured the off-site “Kong on Skull Island” DVD/blu ray release exhibit, and a few other impressive exhibits as well.   Her pics and text messages were all the telepresence I needed. 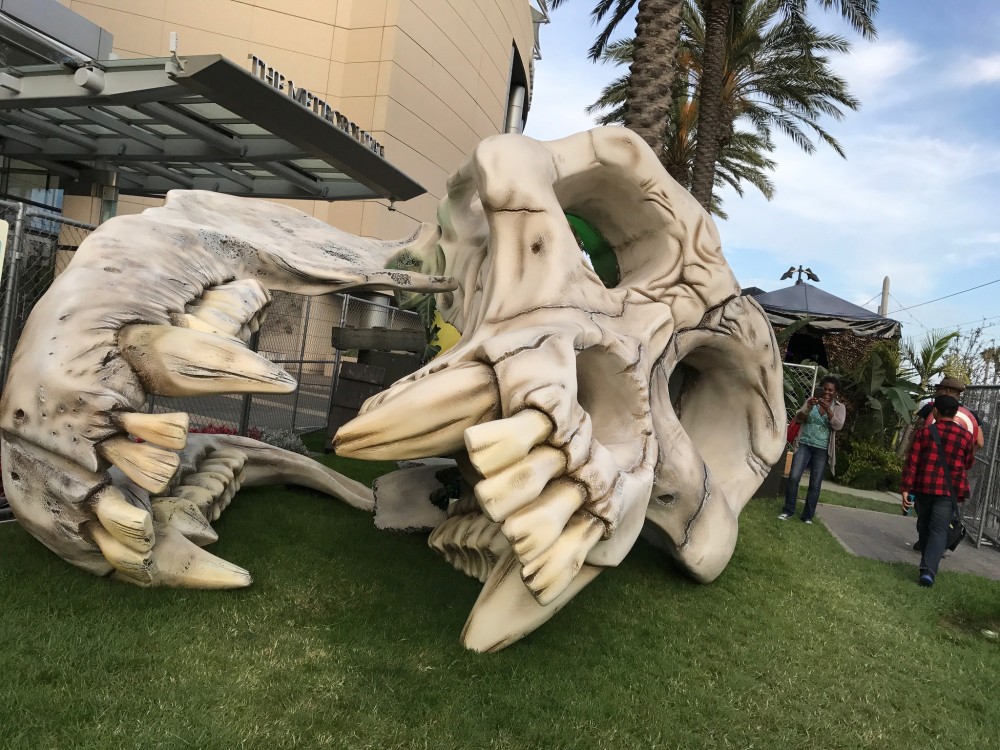 Jules also grabbed a sought-after Doctor Who t-shirt for a friend of ours as I caught up on my social media and texted friends/relatives while playing few episodes of the old “The Invaders” TV series on my portable DVD player.  After this scintillating evening spent plodding around the hotel room in my night clothes, I vowed the next day (the official “Day One” of Comic Con San Diego 2017) would NOT be wasted on arthritis, senior moments, emergent third eyes growing on my forehead or endless checking of Twitter and CNN.   Luckily the evening was soon salvaged as Jules came back to the hotel around 7:30 pm or so with a copy of Nick’s new graphic novel and I devoured it in one sitting.   It was amazing!  I couldn’t put it down, even for a moment.   I immediately went on Twitter and Instagram and spread the word.   If you are a lover of good fantasy, such as L. Frank Baum’s “Oz” books, the original “Star Wars” or Miyazaki’s “Spirited Away”?  You might very much enjoy my friend Nick Abadzis’ delightful for-readers-of-all-ages graphic novel, “Pigs Might Fly.”

We woke up (duh, right?), ate breakfast and went back up to the room to get into our costumes.

Jules was going as “Sharknado”; not a particular character from the campy, over-the-top SyFy channel movies but as the Sharknado ITSELF.   She took an umbrella hat she made for Halloween last year (she went as a rainstorm), hot-glued two plastic containers full of tiny toy sharks to it, made a gray dress with selective smoky accents carefully painted on it, threw on a gray wig/makeup and voila!  She was a Sharknado.   Needless to say, the costume was a HUGE hit at Comic Con.   She posed for dozens of pics, did an interview for Comedy Central (!) and was the belle of the ball!  I was ridiculously proud of her, as she worked very hard on this costume.  Literally gluing sharks to her umbrella hat the night before we left for San Diego!

As for me?  I was cosplaying as a Star Trek/Flintstones mashup; a ‘redshirt’ (the guy who usually gets killed on the landing party) but in the style of the Flintstones.  Jules made the red Fred Flintstone-style tunic (based on my earlier Fred costume), I made the crude Starfleet emblems we sewed onto it, and I made a crude, Stone Age/Bedrock-looking phaser weapon out of styrofoam, gray paint (and seashells for the controls and the beam emitters).   It was a gas!  Not as popular as Jules’ wonderful Sharknado, but I loved it; and quite a few people got the joke. 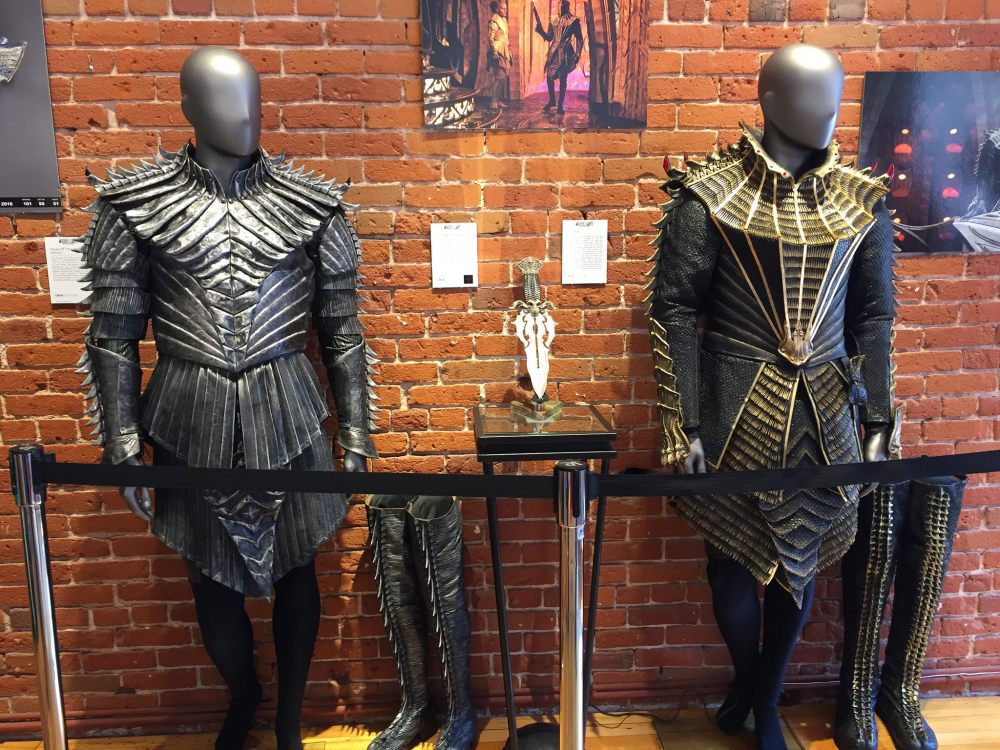 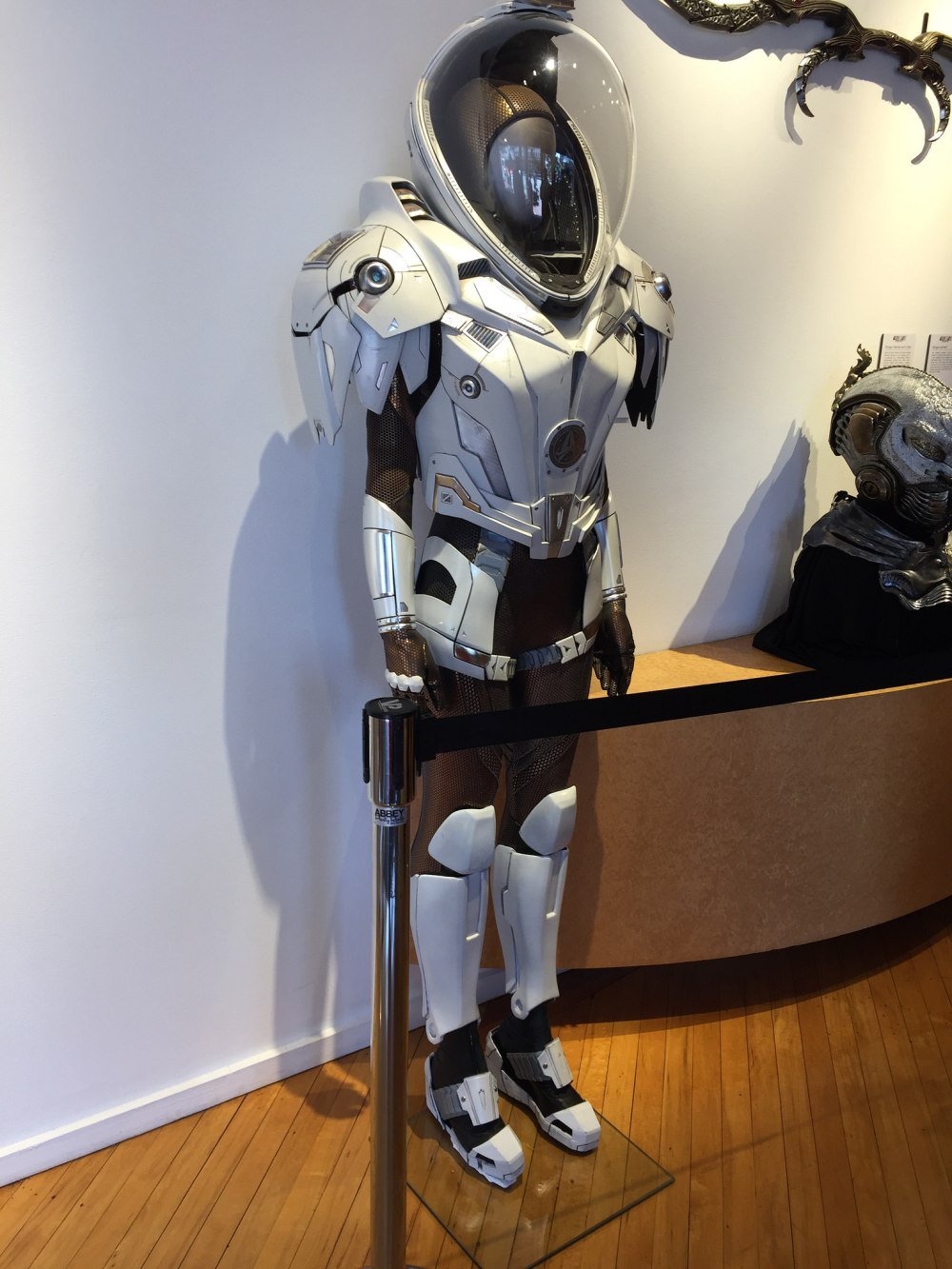 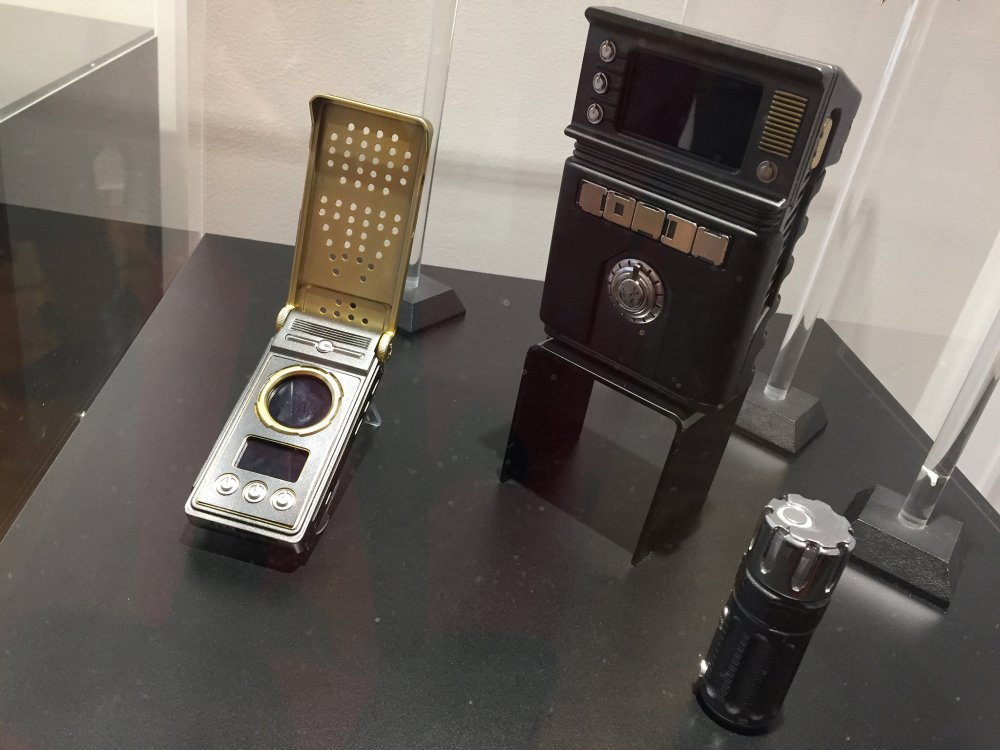 The costume really caught on when Jules and I visited the off-site (outside the convention center) tour of the new “Star Trek: Discovery” Exhibit; featuring costumes, props and production art at the new Star Trek Discovery TV series (coming this September online at CBS All Access) in the Gaslamp Quarter of Downtown San Diego, across and down the street from the convention center.   I wound up posing for a few pictures myself at the exhibit and Jules and I both got to sit in a replica of the new Captain’s Chair.   Based on the look of the props and costumes at the Exhibit?  The new ST series will have some familiar elements (the communicators, phasers and tricorders looked very similar to their ’60s counterparts) but the overall look (including redesigned Klingons) will be radically different; as well as beautifully and meticulously detailed.   The Klingons reminded me of something from Feudal Japan.   These costumes and props looked a lot more elegant than most of the Star Trek props/costumes I’ve seen at other such exhibits over the years.   Looks promising!

At the convention itself, we toured the Dealer Hall, met up with Nick and we got to talk with him for a little while as he signed our copy of his “Pigs Might Fly”; it’s always lovely to catch up with him, even if only for a few minutes (he’s got a very busy Comic Con ahead of him, as he’s booked for a slew of interviews and promotion for his book).

Jules and I also saw a nice, if insanely crowded, Star Wars exhibit at the Dealer Hall; inside there were props and costumes from “The Last Jedi,” coming to theaters in December of this year.   The props had featured a mission status board (the glass boards illuminated by green-lit tracking lines and maps), and costumes for the film.   Sadly, the crowds inside were so thick that I really couldn’t get too close, but I did snag a few photos.

Also got a nice, closeup look at screen-used costumes for the forthcoming DC Comics’ “Justice League” movie; with costumes for Gal Gadot’s Wonder Woman, Ben Affleck’s Batman, Jason Momoa’s Aquaman,  and The Flash (movie version).  I wasn’t too thrilled with “Man of Steel” or “Batman V. Superman” but Jules and I absolutely LOVED this summer’s “Wonder Woman” movie, so seeing the screen-used costume up-close was pretty neat.    As long as Gadot’s Wonder Woman is in the new JL movie?  You can safely count Jules and I onboard.   The 2017 “Wonder Woman” movie is head-and-shoulders above the dark, brooding Batman or Superman films of late, and was one of the most honestly enjoyable movies we’ve seen this year.

Other than these, there were a few other neat little attractions (a table full of little Star Trek models caught my attention), and lots of colorful cosplayers as well.   I didn’t see too many celebrities, though that wasn’t because there weren’t any around.   Celebrities are all over the convention.   But today, I wasn’t really focused on any of that.  I was all about seeing the exhibits and the Dealer Hall.   Besides, we still have Friday, Saturday and Sunday to continue exploring.

At first I wasn’t sure if I was going to be able to have any pictures in this post yet, but I was able to load a bunch of pics from my iPhone straight up to Flickr (woo-hoo!), so I uploaded a few directly into this post.  Yay me… oh, and yay to the reliability of Apple devices and the extreme generosity of the Marriott staff for the use of their lobby’s guest-use iMac.  Much obliged!

I’m also linking the rest of the SDCC 2017 album here:

^
The rest of the pics aren’t fully captioned as of right now, but I’m hoping to amend that really soon (maybe even shortly after I post this blog entry).

Anyway,  stay tuned to this blog for more updates.   Hopefully I’ll have another Comic Con San Diego 2017 entry posted this week (possibly by Saturday or Sunday), as well as a full recap on Monday or Tuesday.