Well, SDCC has come and gone.    It’s been a lot of exhausting, sweaty, crowd-navigating fun.   At age 50, it’s becoming increasingly patience-taxing at times to navigate/negotiate the formidable crowds with good humor and grace, but I wouldn’t trade it for anything.   It’s Nerd-vana.   And when you’re in the middle of it?  You truly feel like you’re in the gravitational center of the geek universe.  There is just SO MUCH happening all at once; there are A-list celebrities, childhood idols, off-site events, off-site parties, movie premieres, concerts, outdoor carnivals, interactive exhibits, collectibles.. oh, and a lot of comic books.

Many old-school Comic Con returnees lament the focus of the convention from a smalltime comic book-enthusiast swap meet (in the ’70s and early ’80s) to the mega-event California Cannes Film Festival it has become.   I see the draw and demerits of both sides of the argument.  While I love getting some great books (got a preview copy of author Andy [The Martian] Weir’s latest, “Artemis” for FREE this year, as well as a copy of comics writer/artist Nick Abadzis’ “Pigs Might Fly”), I also enjoy how the ‘expanded focus’ of the convention has helped to make nerd culture mainstream; something I never thought I’d live to see in my lifetime.  We used to get beaten up and bullied for liking science-fiction/fantasy movies and TV shows when I was a kid.  Now?  It’s about as mainstream as liking ice cream.

San Diego Comic Con’s expansion beyond just comic books has been a boon to geek culture, even if old school fans bitch about the loss of intimacy.   Yes, you don’t have as much elbow room or one-on-one face time with authors, but thousands more attendees are now accommodated than could be accommodated before!  I look at it this way; if you’re a member of, or sympathetic with the LGBTQ community?  You don’t complain because a Pride parade is too big.  You revel in it; as you should!

Anyway,  enough sermonizing and on with the recapping…

If you haven’t yet read it, here’s a quick recap of Preview Night and Day One:

Now onto the rest of the week; here’s the link to my Flickr album, which more or less chronicles the entirety of my experience at Comic Con, all five days (July 19th through the 23rd).  Each pic is captioned (most of them, anyway) and arranged in chronological order for ease of perusal:

Assuming you’ve now seen the entirety of the Flickr album (with ALL the pics from Friday, Saturday and Sunday)?  I’m going to get into some of my favorite memories of SDCC2017.

It began as a rainstorm costume for last Halloween.  My wife saw an example of it done online and she was immediately inspired!  She bought an umbrella hat on Amazon and modified it with diaphanous gray material to simulate storm clouds.   She also used clear beads on filament to simulate large globular raindrops.  She also made a gray gauze gown with streaks on it simulating thinner raindrops as well. This was her original concept for her Comic Con costume until the night before we left for the convention.  A friend of ours named Gwen made some kind of joke about the “Sharknado” movies and my wife Julia was struck with a concept.   That very night she suddenly decided to buy a couple of boxes of small toy plastic sharks.   The next night, the night before the convention, she decided to hot-glue all of those little toy sharks onto her hat. She also added gray face paint and voila!  A Sharknado was born.   It was a HUGE hit.  She wore it on Thursday and Saturday and was interviewed several times (!), including a spot on Comedy Central.   I couldn’t be more proud of her and her crazy costuming skills…

3.  Meeting up with friends.

My old friend John (whom I used to record a podcast with, and whom I’ve known for 24 years) and my newer friend Nick (a writer pal of mine I’d met a few years ago) were both attending Comic Con this year and it was nice to catch up with them for a bit.   John and I toured the Star Trek Discovery Exhibit in the Gaslamp Quarter, across from the convention.   Had a blast; nitpicking and talking sci-fi and pop culture, just like the old days of our podcast.  Nick had less time to spare (he was on several panels and event signings) but we managed to squeeze in a few minutes and some hugs.  We also saw his delightful wife again before they left. 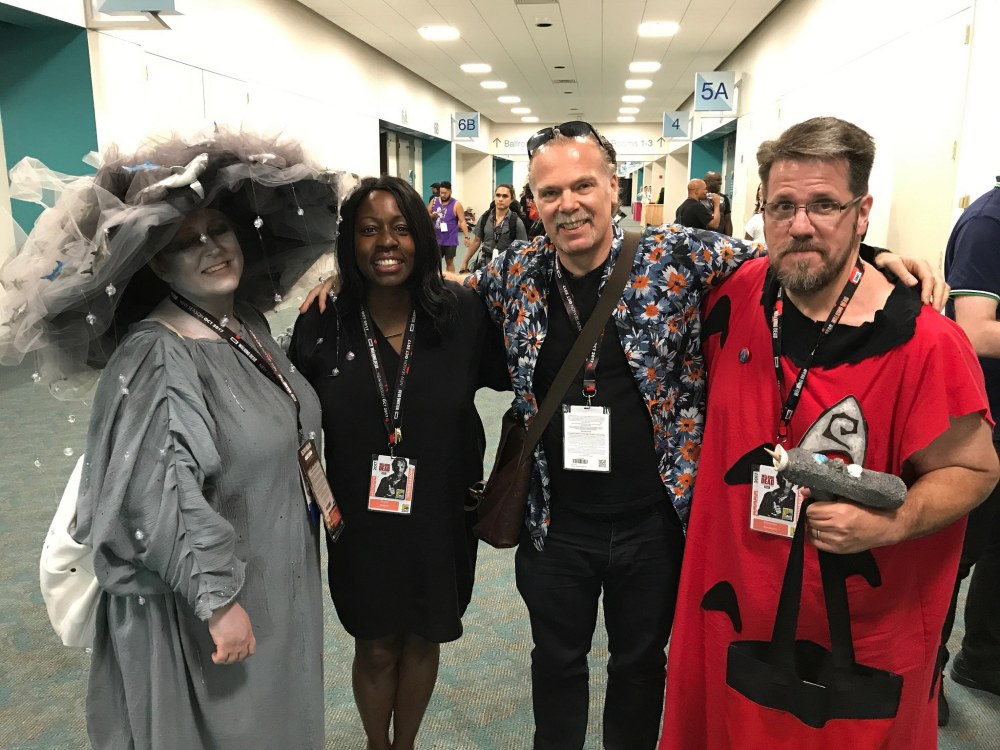 My only regret?  Our friend Alison wasn’t able to make it this year due to a perfect storm of awful coincidences.   Ali is the person who actually introduced me to my wife 20 years ago this summer.

So sorry, Alison.   You were very much missed!  Next year Ali!  Next year…

These are only a small sampling of some of the utterly INGENIOUS cosplay you typically see at Comic Con (just not San Diego, but in Comic Cons all over).  The sheer passion and creativity by average folks like you and I is simply staggering.   The rest of the cosplay pics are in the Flickr album link above. 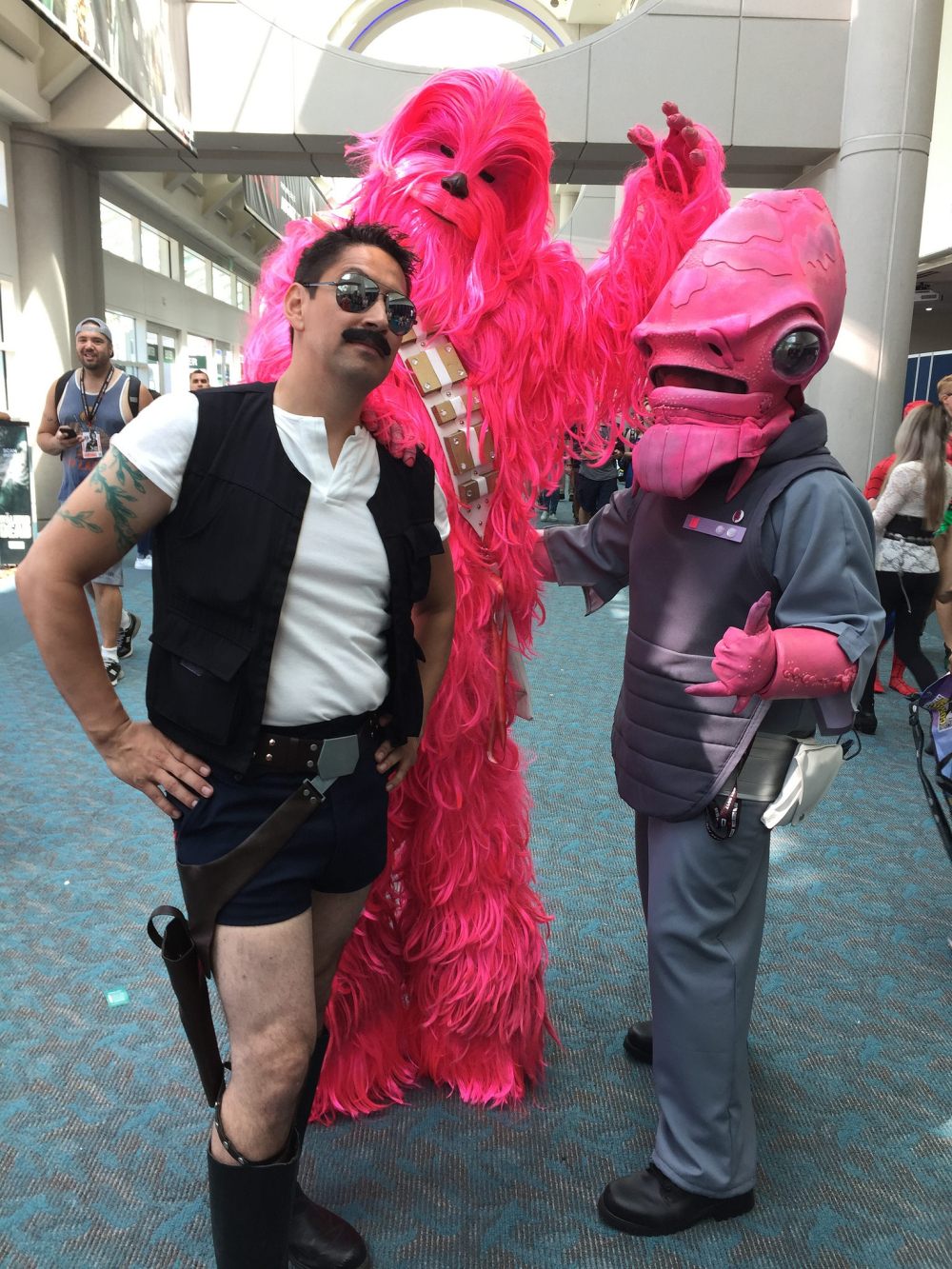 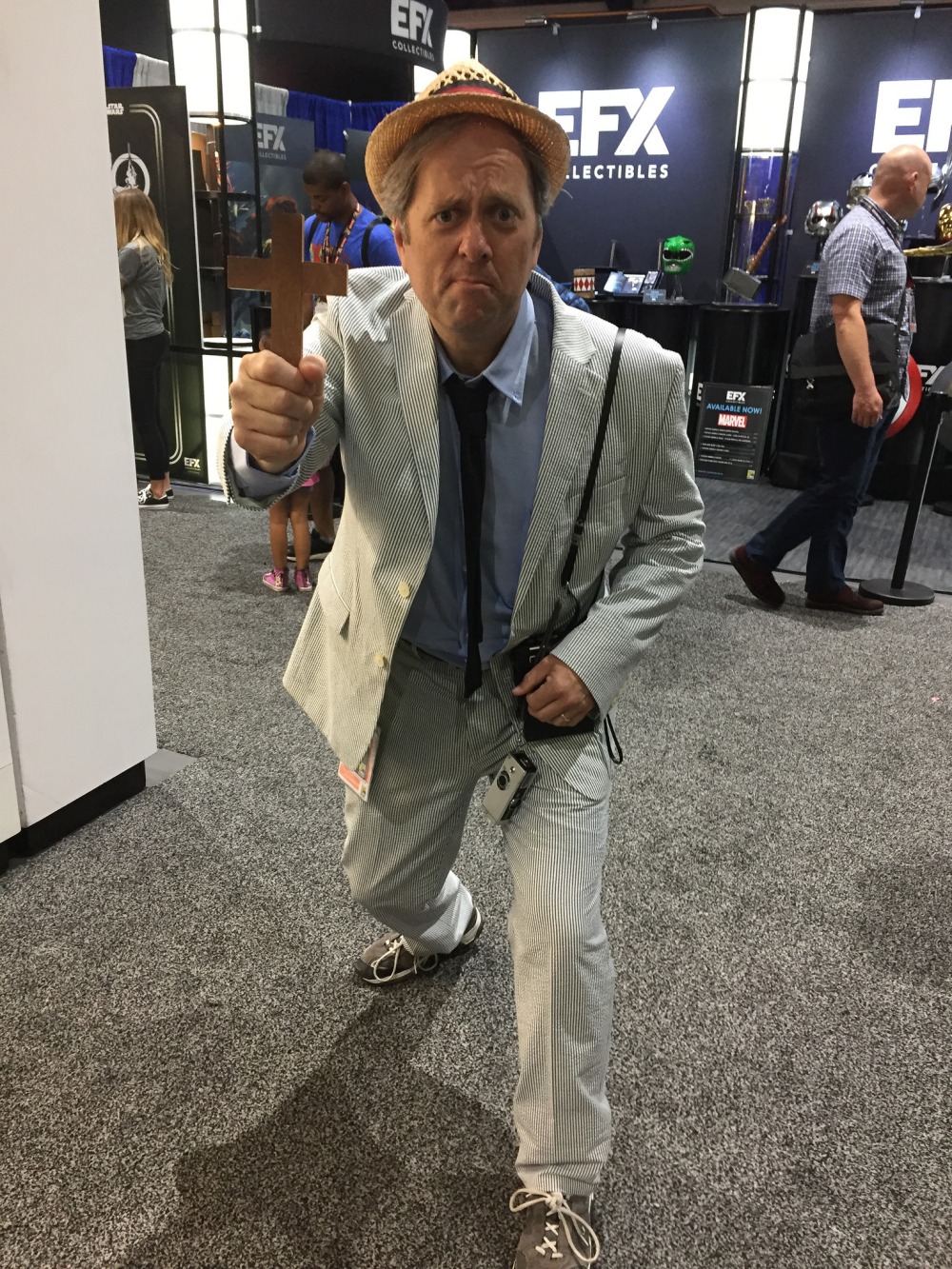 Everything from The Night Stalker’s “Carl Kolchak” to Wonder Woman with Iron Man in a Hulkbuster suit (full size, too!).   This is an aspect of San Diego Comic Con that NEVER gets old for me.  It’s also a lot of fun when you get to participate, too…

Andy Weir’s “The Martian” was easily my favorite book that I’d read in 2015 (before the film came out), and I was lucky enough to tell him that in person when I met him after a panel I’d attended at the Comic Con of that year.   He autographed my copy of “The Martian” that I just  *ahem* happened to have on me at the time… hehe.

^ And I waited in line this year for free advance copies of his new book “Artemis” about life on a future lunar city.   It was an hour wait in a lengthy line and my arthritis protested, but I’m glad I persevered.  I’m only a few pages into “Artemis” but I think we have another winner here, folks.

I just hope Weir doesn’t begin to think that I’m stalking him (!).  Anyway, he’s a great guy; witty, irreverent and smart as hell.   His panel discussions are a lot of fun, and his humor is very reminiscent of his protagonist in “The Martian”, Mark Watney (perfectly cast in the 2015 movie by Matt Damon). 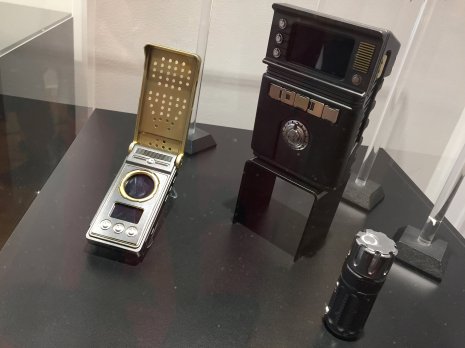 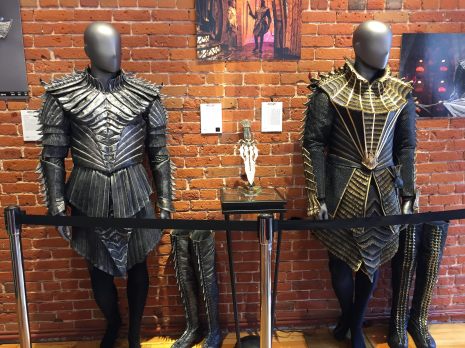 A small, off-site gallery in the Gaslamp Quarter of San Diego (across the trolley tracks from the convention center) had a wonderful exhibit of props, costumes and production artwork from the upcoming CBS-All Access streaming series, “Star Trek: Discovery”, premiering September 24th of this year.    It was cool enough to visit twice; once with my wife and a second time with my friend John. 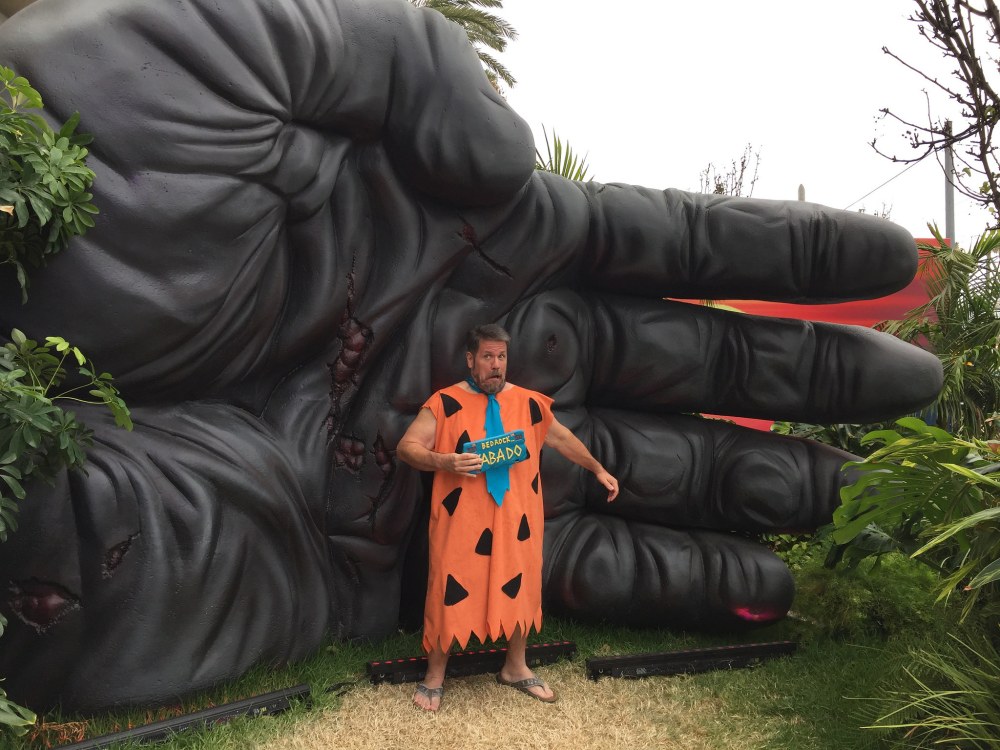 Who knew at the tender age of 50 I’d be making my modeling debut?  This is a funny little story that’s really much ado about nothing but I got a few laughs out of it.  I first attended the Kong Skull Island exhibit on Saturday morning in my Star Trek-Flintstones mashup (“Stone Trek”) costume.  One of the guys running the exhibit asked me if I would sign a release form so that he could take his own pics of me in my Fred costume at the exhibit for Warner Bros. promotional use, since Warners owned both King Kong and The Flintstones.  In fairness, I reiterated to him that my costume had Star Trek elements to it, and it occurred to him that ST was owned by CBS and not Warners.   But I told him I would gladly return on Sunday in my full-on Fred Flintstone costume, which I had at the hotel.   He was pleased, and I agreed to return.   I came back that Sunday morning (the last day of the convention incidentally); he let me take a picture with my own camera (had to record my “modeling debut,” of course…), and he took his pics of me standing in various poses in the grip of King Kong’s hand.

MANY texting jokes ensued with several friends of mine about my big, modeling debut; including a good ribbing from my friend Regina, who used to model in bridal shows when she was younger.   I told her that the minute I became a model a big ape tried to get his paws all over me.   I texted another friend (and certified movie devotee) Avani with a paraphrased quote from 1968’s Planet of the Apes: “Take your stinking paw off me you damn, (BIG) dirty APE!!”  That one was so good I reused it on my Twitter and Instagram accounts as well (hey, I had to publicize my modeling debut, right? Hehe…).    I also promised my friends Jeri and Nick that I wouldn’t get collagen injections in my lips, either…

There are many more little things we observed, partook in, and otherwise enjoyed, including our terrific hotel; the Springhill Suites Marriott in Mission Valley, San Diego. We usually manage to book a hotel within walking distance of the hotel, but this year we couldn’t.   The Springhill Suites is about 6 or so miles from the convention center, but a convenient and free shuttle service to and from the convention eliminated that worry/hassle.

At any rate, the experience is well-chronicled in my Flickr album (with captioned photos) so for the sake of people like myself who are simply too lazy to scroll back up?  I will gladly repost the link to the album here:

Tomorrow, Jules and I make the voyage home (an hour and a half in good traffic); leaving the great, sweaty, nerdy embrace of ‘our tribe’ here at Comic Con and back to the real world.  It’s a bit jarring to make the reentry transition sometimes, but we’ll manage (hehe).

See you on the other side…