To paraphrase the tagline from JAWS 2:  Just when you thought it was safe to go into the museum…

I’d like to preface by saying JAWS is one of my top five favorite movies of all time. 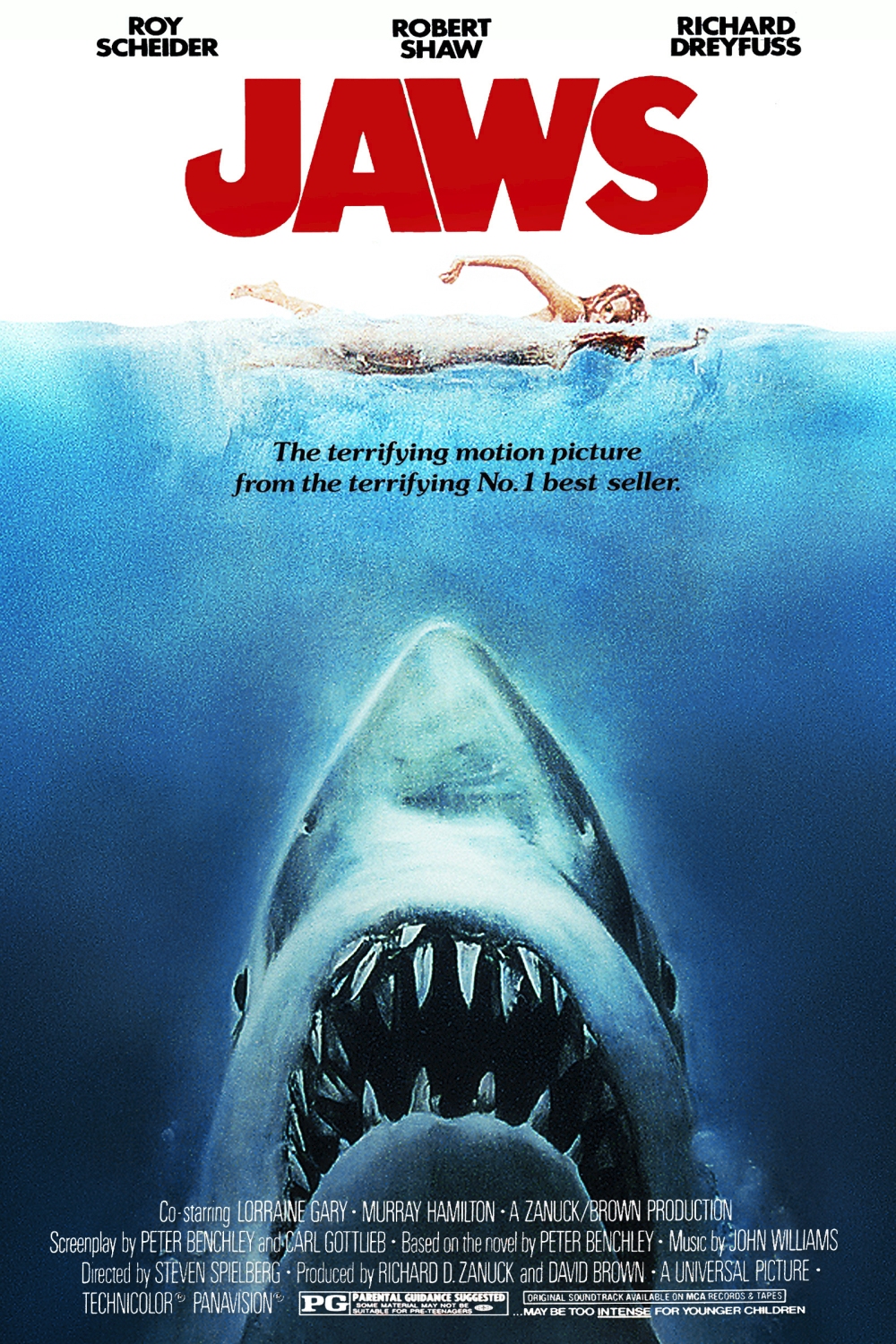 If I were marooned on a desert island with a portable DVD player that ran on coconut juice?  I would hope that I’d have a copy of JAWS in my straw hut, along with “The Empire Strikes Back” and “2001: A Space Odyssey.”

Oh, and I’d hope that I get rescued too, of course…

So, if any fellow JAWS fan readers of this blog are anywhere near the southern California coastline between now and September 16th of this year (2018), I would strongly advise you to take an hour-and-change boat ride over to Catalina Island.

The Catalina Island Museum in the port city of Avalon (one of my favorite nearby locales to chill) is hosting an exhibit called, “JAWS: The Art of Fear in Filmmaking.”  The exhibit contains selected props, storyboards, poster concepts, production artwork (courtesy of JAWS production designer Joe Alves) and original life-sized sculptures by makeup artist/producer/director Greg Nicotero (“The Walking Dead”).

When you first walk into the exhibit, you are greeted by a life-sized three-dimensional sculpture of “Bruce” the shark (named for director Steven Spielberg’s lawyer!), created by Nicotero. It’s stunningly accurate, even down to Quint’s stab wounds and the deliberately unrealistic ‘jowls’ used to hide the movie shark’s mouth mechanisms.

On the other side of the exhibit room are three, almost unnervingly life-like mannequins of Robert Shaw’s “Quint”, Roy Scheider’s “Chief Brody” and Richard Dreyfus’ “Matt Hooper.”   The Hooper mannequin looked particularly lifelike up close.

The figures are posed on a recreation of the Orca’s stern, during the scene where the characters were attempting to tighten rope slack from barrels harpooned onto the shark itself.

There are a few original JAWS props on display as well. 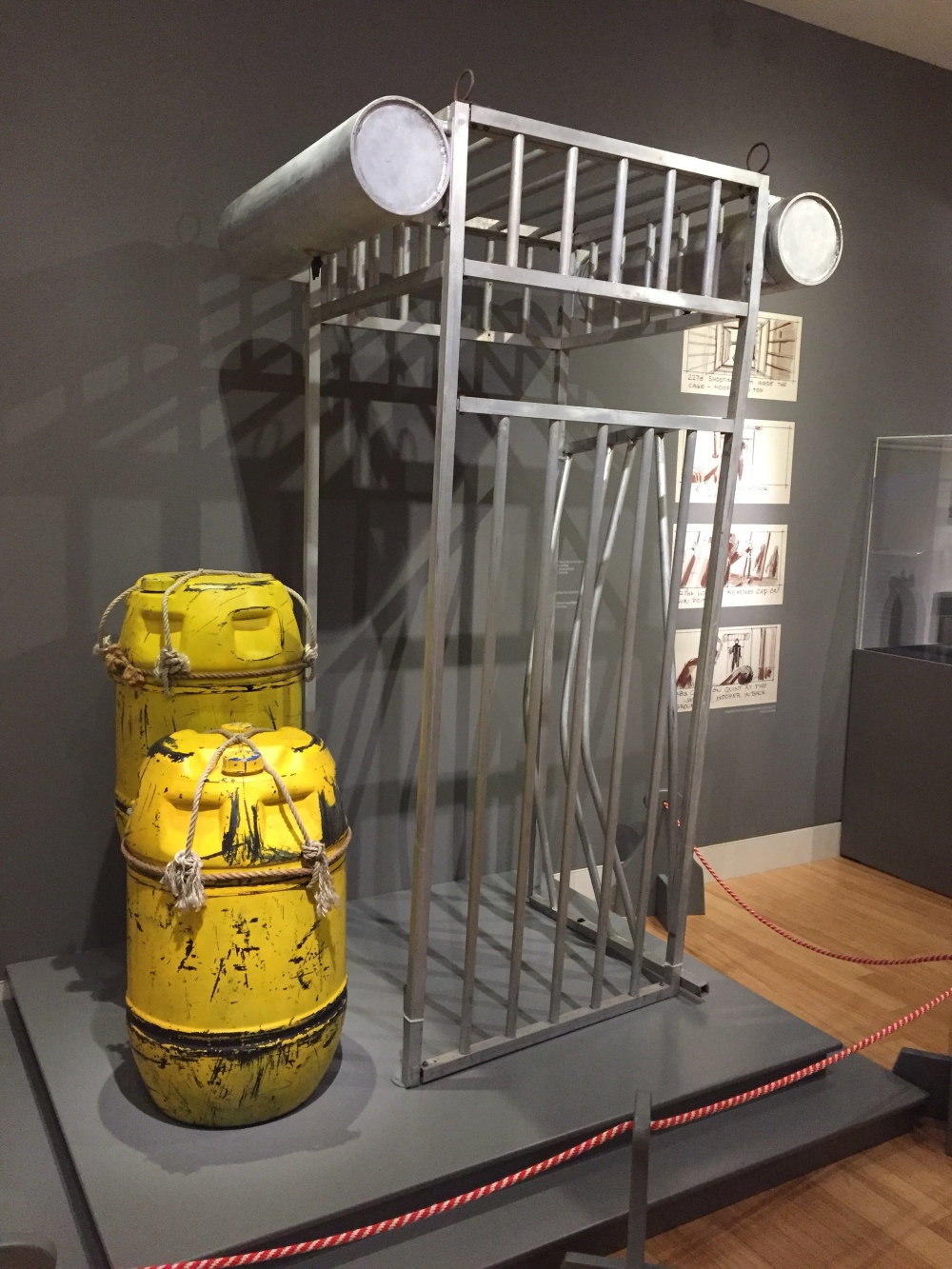 There were two of the three barrels (“Not with three he can’t!”) from the film, as well as the demolished “anti-shark cage” (signed by Richard Dreyfus and his stuntman Dick Warlock), an unexploded shark-killing oxygen tank, and a sonar scope from Hooper’s own vessel seen earlier in the film.

I have to confess something.  Even though I knew it was against the rules, I very gently laid a hand on one of the barrels, as well as the cage.  I didn’t shake them or rattle them (because I’m not an idiot).   I just held my hand to them for several seconds each.

To physically touch two pieces from one of my favorite movies of all time was a bit dizzying.  This may not sound quite right, but I think I was starstruck by the movie’s props.

Beyond the props and mannequins, there were other attractions at the exhibit as well. 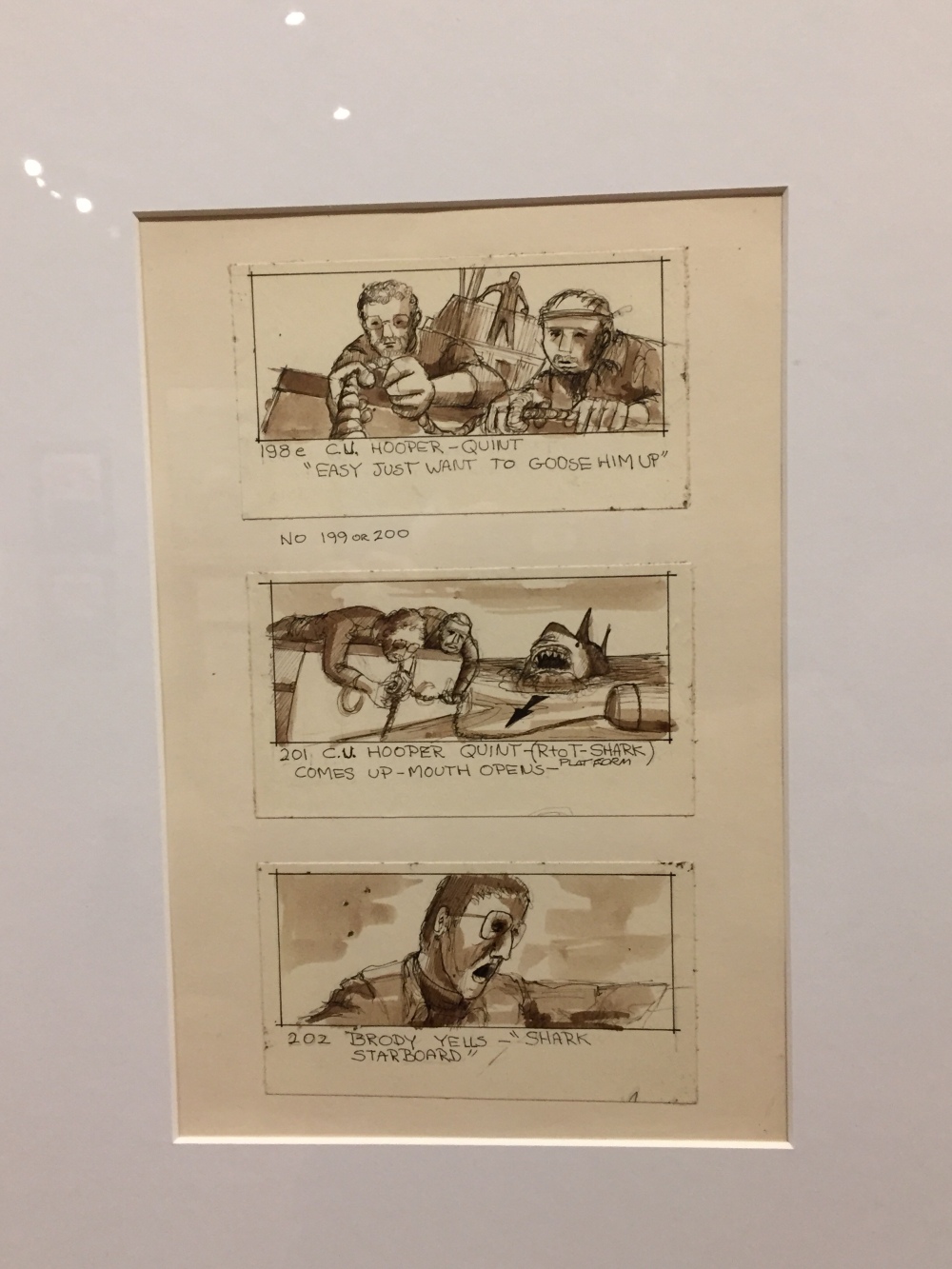 There were also production memos, a second-draft script (with polishes by writer/costar Carl Gottlieb), and notes from director Steven Spielberg to Bob Mattey, the famed shark-builder who came out of semi-retirement to work on JAWS.  Mattey was an industry legend before JAWS for his work on the classic 1954 Disney film, “20,000 Leagues Under the Sea” (1954), another favorite movie of mine.

The exhibit is nerdvana for JAWS fanatics.  I honestly think I could’ve spent an entire day in that little room if my wife and I weren’t on Catalina to celebrate our wedding anniversary (priorities, right?).  Fortunately, I had the sense to marry a fellow JAWS geek, so she was similarly enthused about the exhibit.

If you don’t have the entire day to spend drooling over each piece of artwork, there is a terrific book (“Joe Alves On Designing JAWS” by Dennis L. Prince) that you can buy in the museum’s gift shop.  The book is filled with many of the storyboards, artwork and photos seen in the exhibit.  It’s the ultimate souvenir.  In fact, I went back to the museum on our last day at the island just to snag a copy ($40 each, $60 for an autographed copy).   It’s a gorgeous book, and a must-have for serious JAWS fans.   It also made for a great read on the boat ride back to the mainland.

Large catamaran ferries run to Catalina Island several times a day, and the island itself makes for a lovely day out; with nice restaurants and a very “Amity Island” feel to some of the older houses and buildings in Avalon (some dating back to the 1920s).   With their red, white and blue decorations, some of those buildings reminded me very much of those seen in Amity Island’s “4th of July Regalia.”

I half-expected to see Mayor Larry Vaughn (the late Murray Hamilton), in his anchor-patterned suit, stepping out of a front door… 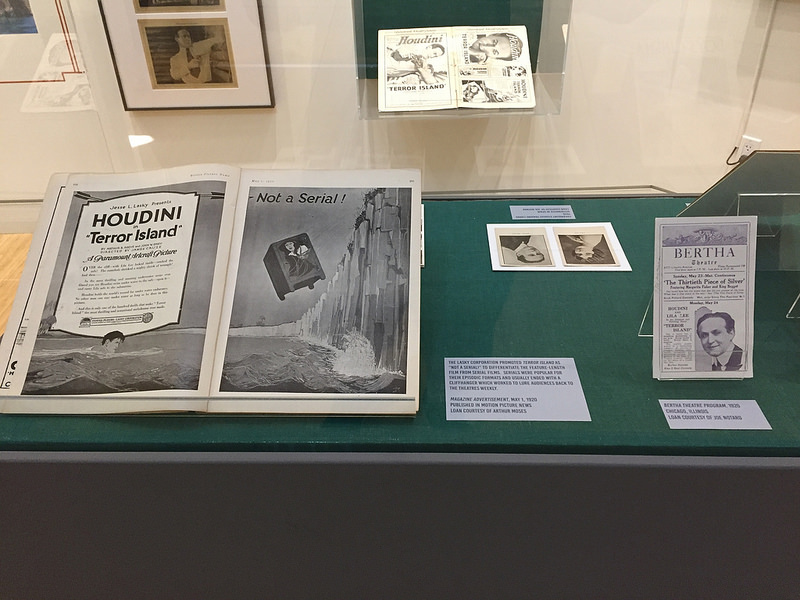 The museum is also having an exhibit of the legendary magician Harry Houdini, and his connections to Catalina Island, where he’d filmed his movie, “Terror on the Magic Isle.”  There are props, artwork and publicity materials from that film (and others) as well.

“JAWS: The Art of Fear in Filmmaking” Flickr album.

“JAWS: The Art of Fear in Filmmaking” Exhibit at the Catalina Island Museum in Avalon is, to quote the late Robert Shaw’s Quint, “Incredible…”

Catalina Island Museum admission fees are $17 per adult,  $15 for seniors, military and students (with valid ID).  Children under 15 are free.  Museum hours are 10 am to 5 pm. 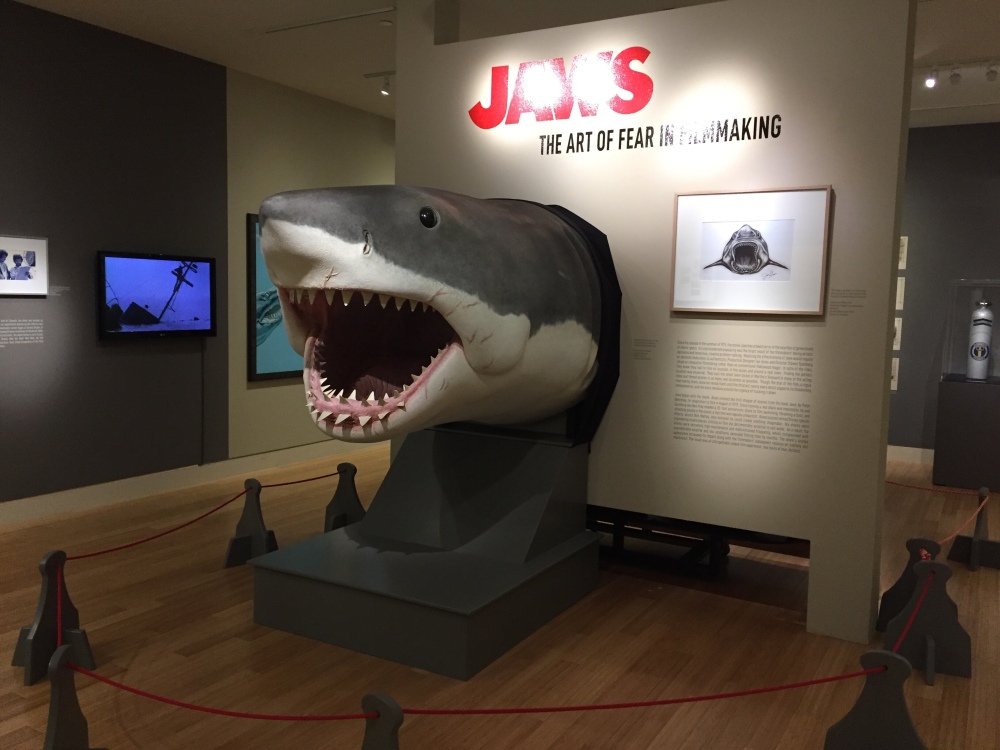