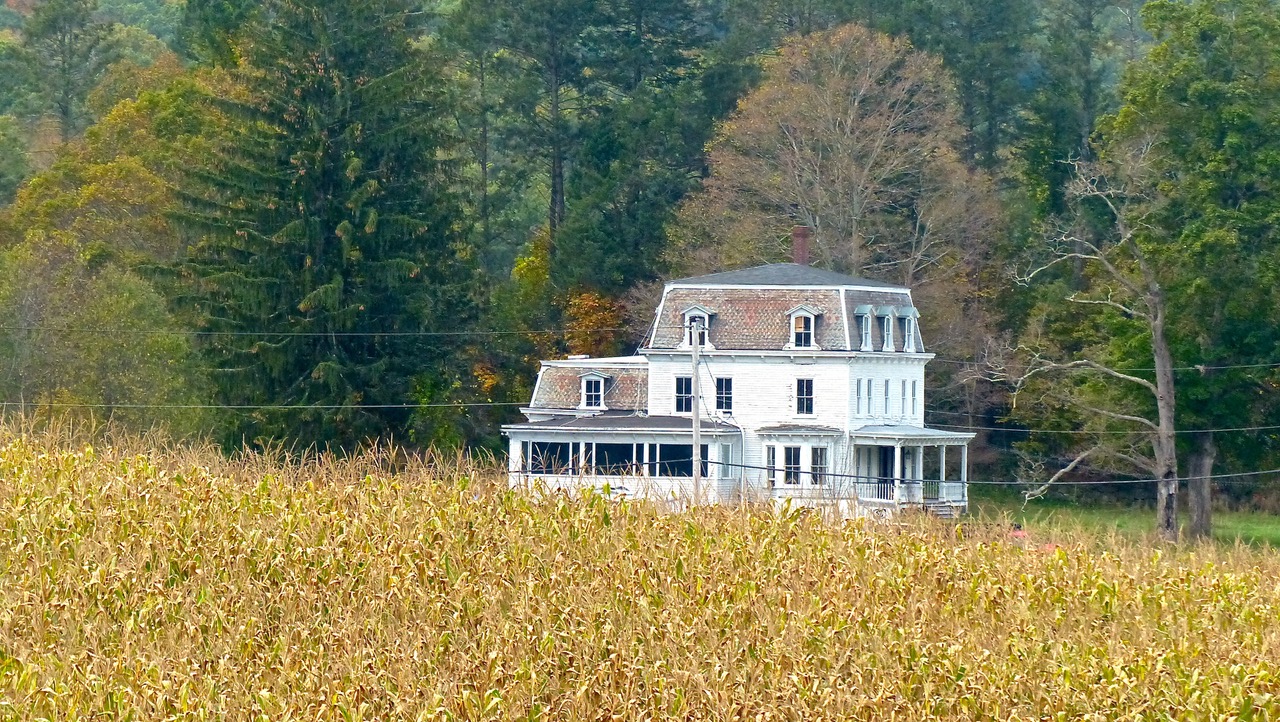 There’s nothing terribly original about the farmhouse-under-seige scenario.   Precedents include such classics as “Night of the Living Dead” (1968), “Straw Dogs” (1971) or even the Three Little Pigs and the Big Bad Wolf.

What makes director/co-scripter/star John Krasinski’s impressive “A Quiet Place” (2018) uniquely distinctive are the rules imposed upon this particular farmhouse-under-siege scenario.  This rural family have been invaded by sound-seeking, lightning-quick lethal monsters and are forced to live their lives as quiet as church mice.   A single, sudden, unintended noise can bring these super-swift creatures upon their victim within seconds.   That’s the movie’s gimmick.   But what’s remarkable is how this seemingly simple gimmick turns the movie’s entire 90-minute running time into pure, unfiltered suspense (there’s a word I haven’t seen a whole lot of since last year’s “Get Out”).

The Abbott family of five consists of father Lee (John Krasinski), mother Evelyn (Emily Blunt), daughter Regan (a standout Millicent Simmonds) as well as two sons; Marcus (Noah Jupe) and  Beau (Cade Woodward).   Without going too deeply into spoilers, suffice it to say that the number of family members is subject to change.   This movie doesn’t screw around, and no one is necessarily safe.

The sound-sensitive predators of the film do their job effectively, acting as the movie’s big, bad wolves.  Stylistically the creatures are a cross between the 2005’s “War of the Worlds” aliens with a bit of “Predator” thrown into the mix (their clicking sounds reminded me of a dolphin’s sonar).

If I had any complaints, it’s that I wished the creatures hadn’t been shown quite so much (less is more…the lesson from Hitchcock, or even Spielberg’s “JAWS”).  But it doesn’t really matter.  The monsters are merely a means to force the Abbott family into their eerie, pantomimic existence.   That’s where the film’s nightmare mojo comes from, and not the creatures themselves.

The Abbotts walk everywhere barefoot (no noisy hard-soled shoes), use sign language in place of speaking (a logical plot point, since their daughter is hearing-impaired) and even play board games with crocheted trinkets (yarn game pieces are less noisy than hard plastic).   The rules that the Abbotts live by are strictly enforced, as their lives literally depend upon it.

One might question why the Abbotts don’t deliberately use sound to lure the marauding creatures into a deadly trap earlier on in the story,  since we see that the family has some rudimentary means of defense (guns, fireworks).    Or what would happen if a member of the family talks in their sleep (or even farts)?   The creatures’ origins are ever really explained either, but then again; this is a horror movie, not Star Trek.   At the end of the day, an in-depth explanation of the creatures wouldn’t really matter anyway.

You either go on the joy ride, or you spend all day kicking the tires. 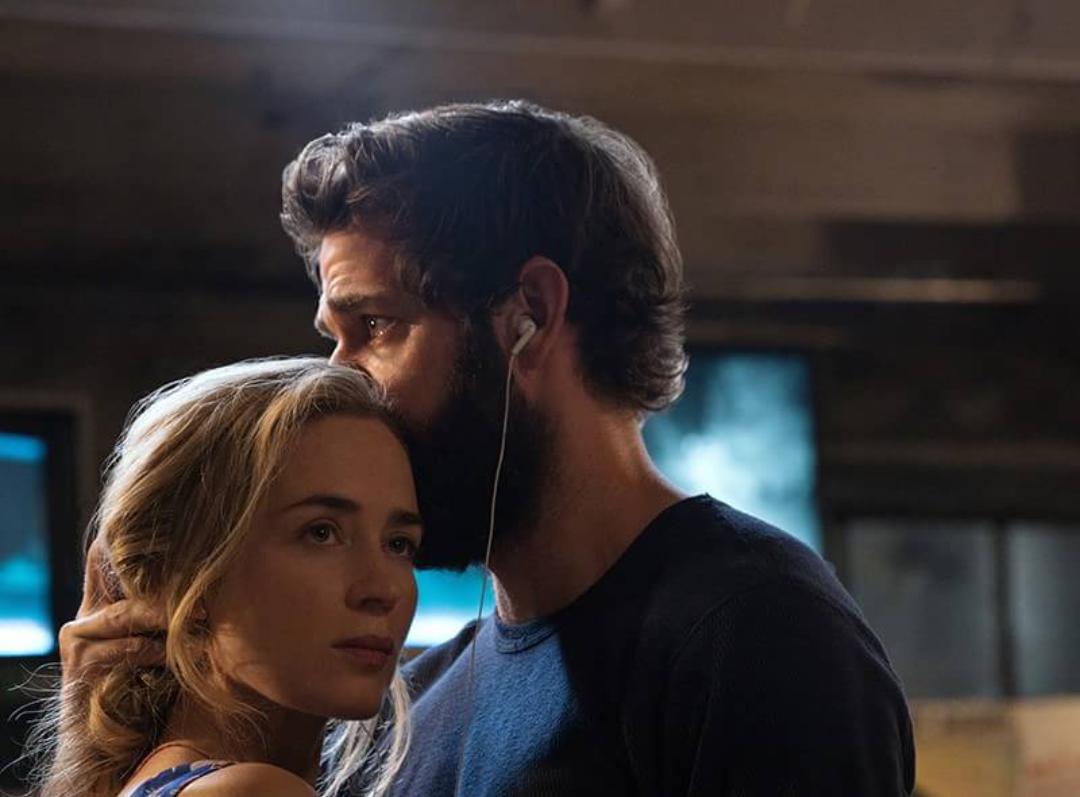 What is apparent is that the invasion (alien or otherwise) was a national, or even worldwide disaster, since we see Lee attempting to contact other survivors with his radio set (and yes, he wears headphones and uses SOS keys instead of his voice).   All the audience needs to know is that there are at least three of these creatures known to the Abbotts in their immediate area.  These are the sharks in the water that this particular rural family has to worry about.   Leave it at that.   Anything more can be brought up in a sequel.

A ticking clock is also set early on in the story with the revelation of Evelyn’s pregnancy; and yes, her baby’s delivery into a world where silence is literally survival is every bit as heart-stoppingly tense as you’d imagine.

The actors are all standouts.  Krasinski makes for an effective patriarch (both of the family and of the film itself).  Blunt exudes an interesting, earthy-yet-ethereal quality and is revealed as the true strength of the family.   Millicent Simmonds’ ‘Regan’ (perhaps a nod to Linda Blair’s character in “The Exorcist”) is a marvel.   An actual hearing-impaired actress, Simmonds is so natural that it’s hard to believe this is only her second feature film.   Noah Jude projects a sustained, realistic fear that never wanes.   This cast deserves much credit for maintaining such a high tension level in what is, for their part, a silent movie.

An interesting choice is made using “Abbott” as the family’s name (though it’s never mentioned in-script), as it brings to mind the head of a monastery (an abbot) as well as a monk’s vow of silence.

Director Krasinski’s style (a singularly pervasive plot-device, an autumnal color palette, gaslight cinematography, etc) very much reminds me of the leaner, meaner days of M. Night Shyamalan’s earlier work (I meant that as a sincere compliment to both).  Krasinski really put his all into this film, pulling triple duties (Brian Woods and Scott Beck cowrote the script with Krasinki, and get story credits as well).   As far as horror auteurs go, Krasinski could be this year’s Jordan Peele (the writer/director behind last year’s Oscar-worthy “Get Out”).

In short, “A Quiet Place” is an effective, efficient horror movie that lays down its rules early on and strictly adheres to them, without pausing to examine them too closely.  Sometimes it’s enough to simply create a nightmare scenario without turning on too many lights to kill the mood.

“A Quiet Place” is simple, intense, and most of all, it works.