The show to which I am now officially addicted as of last season is back, and I just caught Season 3’s premiere, “Fight or Flight.”

I don’t want to give one of my usual long-winded, spoiler-laden reviews because with the show being so serialized, it’s best if I save that for my S3 recap.

The serialized format is fitting for a show based on a novel series (the James S.A. Corey novels, which I still haven’t read.  Sorry, but at my age there are only so many years of life life…it’s watch the show, or read the books).  But I hope/plan to do a full season recap at the end of S3.

Here are the links to my earlier posts on “The Expanse”’s first two seasons:

Tiptoeing into “The Expanse”….

Wading Deeper Into “The Expanse”…

After binge-watching both seasons on DVD via Netflix/Discflix (the show wasn’t available for streaming on Netflix, but no matter), I eagerly awaited S3’s premiere of “Fight or Flight,” and aside from the relative oddness (as a new fan) of watching the show a single episode at a time, (this will take time to get used to, I’ll admit) it did NOT disappoint.

S3 of “The Expanse” promises to be the best yet.

“Fight or Flight” is an action-filled but character-fueled season kickoff for a series that keeps getting better and better.  The actors are much looser in their roles since S1, and their chemistry is really palpable.

Here are a few of my favorite moments: 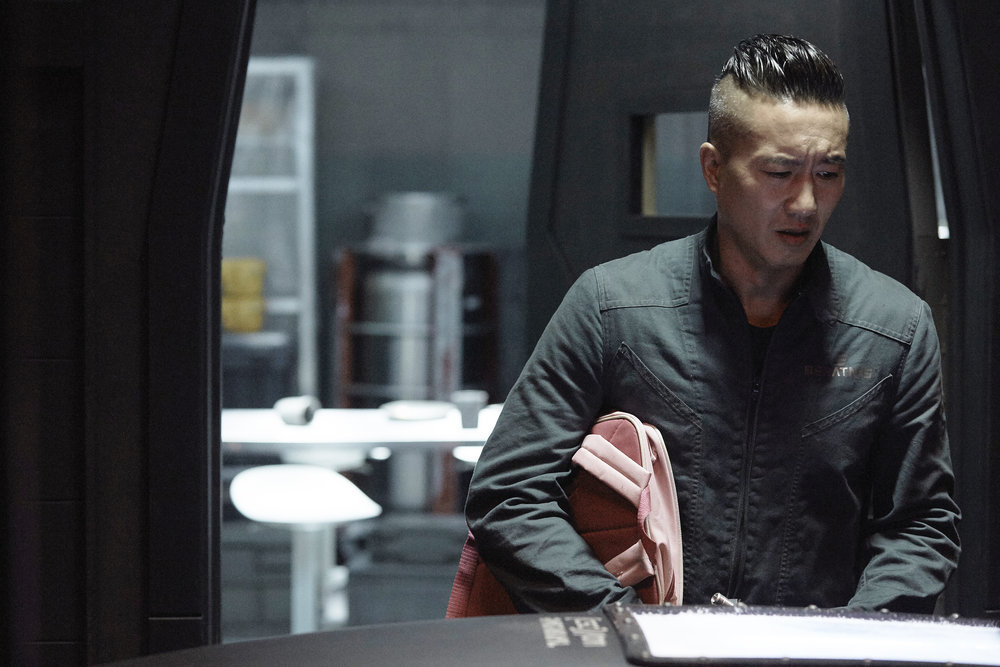 *  By necessity, the Rocinante gets a new name and transponder code, and is renamed the Contorta; unofficially coopted crew member Dr.“Prax” Meng (Terry Chen) suggests the name Pinus Contorta, after a tough little species of pine that has to be burned before it releases its seed.   Fitting…

*   Holden (Steven Strait), Amos (Wes Chatham) and Alex (Cas Anvar) are not in a terribly forgiving mood with regards to Naomi’s (Dominique Tipper) decision to give the protomolecule to Belter Fred Johnson (Chad Coleman) last season.   The coffee maker took it the hardest…

*  Martian marine Bobbie Draper (Frankie Adams) and my favorite character Chrisjen Avasarala (Shohreh Aghdashloo) make for a truly dynamic pairing.  I was worried that Draper would be on an unequal footing with the incomparably awesome Chrisjen, but this is not the case.   Their scene together in a two-seater escape craft (escaping from the “flying perfume bottle” as Draper calls it) was one of my favorite bits of the episode. Bobbie gives as well as she takes it, that’s for sure.  While Chrisjen’s position as my favorite character of “The Expanse” is in no danger, Bobbie Draper’s bad-ass stock is certainly rising… 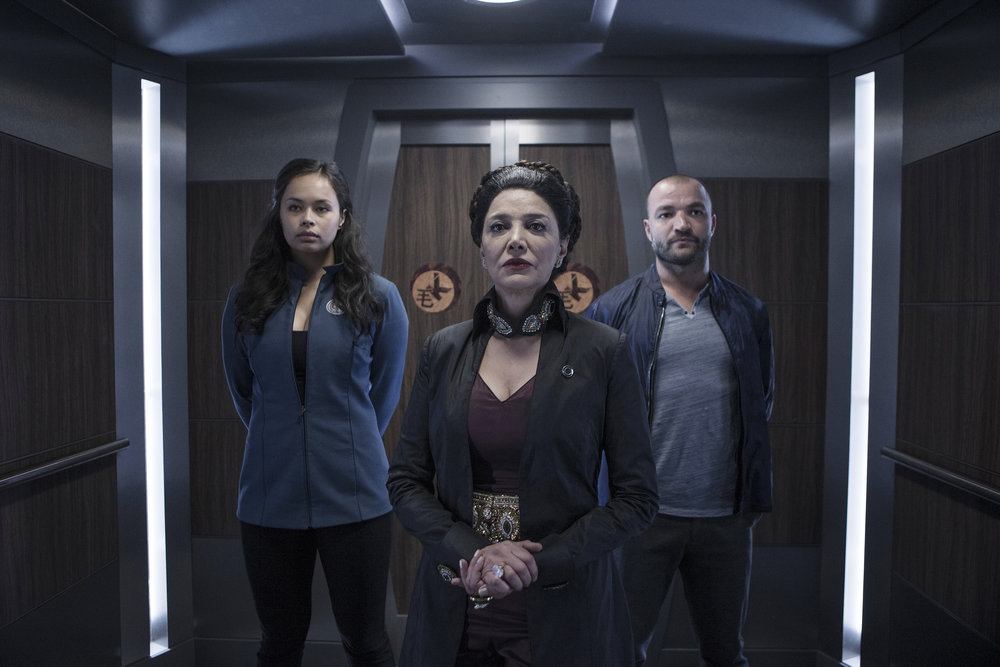 Chrisjen’s shot-up human pitbull Cortyar (Nick E. Tarabay) is barely functioning after being patched and stapled back together, but even following emergency surgery (by Chrisjen, no less!) he is not only able to do his job, but even gets in a very heroic moment after he, his boss and a downed Bobbie meet some…er, resistance aboard the flying perfume bottle. 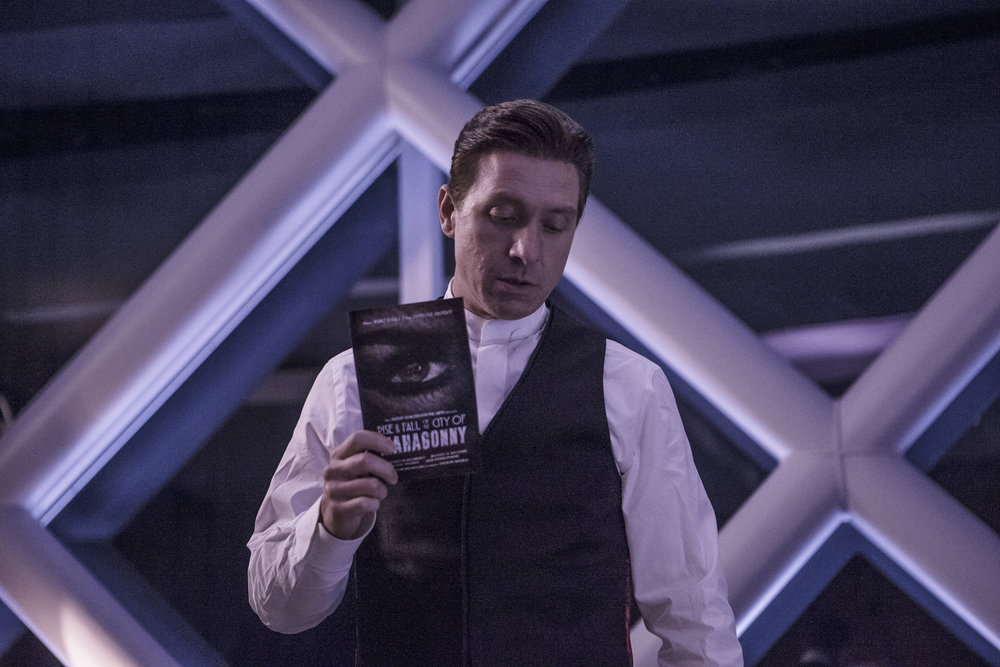 *  Sadivir Errinwright (Shawn Doyle) is stuck in ‘irredeemable creep’ mode.   His dangerous manipulation of Earth’s UN Secretary General creates a couple of boo-hiss moments.  This is one of those times where not reading the novels comes in handy; I can still be surprised by what comes next. 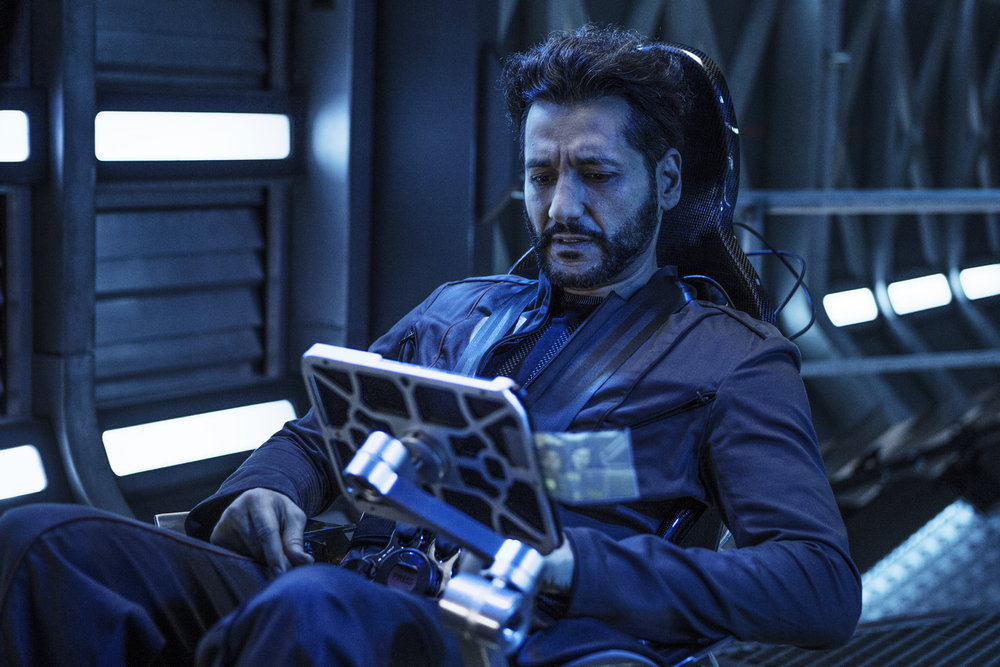 *  Most poignant scene of “Fight or Flight” has to go to Alex (Cas Anvar), sending a heartfelt message to his wife and kid on Mars.   It’s the pain of the ‘not-there dad’ summed up in a single monologue.  It’s a soliloquy of Alex’s life, and it’s great stuff.

I recently had the pleasure of meeting Cas Anvar at WonderCon in Anaheim last month, and we had a nice meet-and-greet.  I was cosplaying in my “Stone Trek” mashup cosplay (Fred Flintstone-meets-Star Trek) and he got a kick out of my Stone Age phaser.   He also immediately got the reference when I told him he was ‘my favorite Martian’ (he grinned, and said that he lacked Ray Walston’s antennae…).

I also congratulated him on his memorable role in the two-part finale of the fan film series, Star Trek Continues.

While we arrived in Anaheim a couple hours too late to attend WonderCon’s “Expanse” panel, meeting “Alex Kamal” himself pretty much made up for it.   A friend of mine who did attend the panel (but isn’t an “Expanse” fan) mentioned that Shohreh Aghdashloo was unable to attend, which eased my disappointment even more so.  Meeting her in person at a convention (preferably without fainting) is still a hope of mine someday… 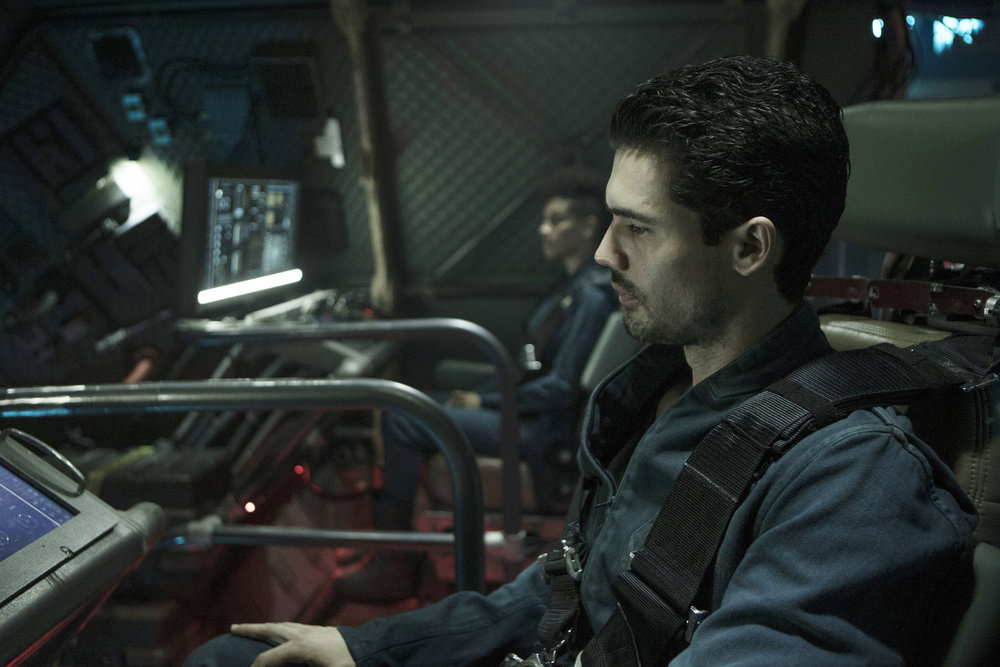 Anyway, I will save the rest of my observations (with plenty of spoilers) for the end of the season.  For now, it’s great to be back in “The Expanse” again… even if the show’s universe is rapidly heating up to the surface temperature of Venus.  Nail-biting time.

For now?  It’s going to be a challenge to my increasingly fragile, middle-aged patience to watch one episode at a time till the end of the season…