This week’s Discovery episode title (translated from Latin) means “If you want peace, prepare for war.”  The episode was also written by famed Star Trek novelist Kirsten Beyer, who is on the writing staff of this series.

Since this was the first of an apparent two-parter, I was tempted to wait till the 2nd part airs next weekend before I discussed the two-parts together at length; but it’s easier to write it all down while it’s still fresh in the old cobwebbed noggin, so here goes…

The episode literally opens with a bang.   The Discovery, using her spore-jump drive, aids several Starfleet vessels ambushed by cloaked Klingon vessels.  During the battle, the starship Gagarin is lost.  A frustrated Capt. Lorca confers with a previously seen Vulcan admiral (via hologram), and a mention is made of a Discovery landing party on a mission to the planet Pahvo.   Everything on the surface of Pahvo resonates at specific (almost musical) frequencies, and that collective energy is channeled through huge natural crystalline towers into space.   It is hoped that these crystalline towers can be used to direct energy at cloaked Klingons and neutralize their invisibility advantage.

In the mess hall, Lt. Stamets tells Cadet Tilly he seems to be experiencing disturbing side effects from his tardigrade genetic manipulation; his sense of reality becomes momentarily disrupted.  He doesn’t want to report the condition for fear of becoming a Starfleet lab rat, and of jeopardizing his partner Dr. Culber’s medical career (as genetic manipulation is illegal in the Federation).  If Culber files a report on Stamets’ condition, his career might be over.

Commander Saru, Lt. Ash Tyler and Specialist Michael Burnham are on the surface of Pahvo where they are confronted with shimmering patterns of energy that appear to be the living essence of the planet.   Saru, in an attempt to make contact, becomes seduced by the lifeforms’ utterly harmonious and non-fearful existence.  Saru, a constantly fearful member of a natural prey species, has never known a moment without some form of fear.   Under the aliens’ influence, he is determined to stay on the planet; to the point of sabotaging the landing party’s return to Discovery.

On the Klingon sarcophagus vessel, a scarred and disaffected L’Rell sets about freeing captured Admiral Cornwell in a desperate bid to secure her own defection.   The admiral L’Rell’s self-appointed superior, Kov, foils L’Rell’s plan, yet spares her life in exchange for her loyalty.

Burnham successfully gets a signal off (due to the Pahvans’ aid at the crystal tower), and the three are rescued from the surface.   Saru is saddened by his own feelings of betrayal to his shipmates as well as the loss of his Pahvo-induced security/tranquility.    On the bridge, Lorca finds that a Klingon ship has entered Pahvo space.  Lorca mistakenly assumes that Burnham gave their position away to the Klingons; in truth, the planet itself ‘invited’ both parties back to settle their war, since the Pahvan value peace and tranquility above all else.   As the Klingons approach, the episode ends; to be continued in next week’s mid-season finale.

Wow.   Normally I’m not terribly impressed with lots of ‘pew-pew’ space battles, but this was truly cinematic quality stuff.  Reminded me of some of the space battles we saw in the last few seasons of Deep Space Nine during the Dominion War.  And the loss of the Gagarin was palpable, especially since we caught a glimpse of her captain and crew.  She appeared to be a Walker-class, like the Shenzhou (Burnham’s lost ship from the first two episodes).   I could see fans like myself picking over the minutiae of that battle for days…

*  A planet with its own ‘musical’ background noise.

The idea of Pahvo having its own near-musical resonance was a nice nod to the original series’ pilot “The Cage” with Talos IV’s ‘singing plants.’   The sounds of the singing Talosian plants and Pahvo’s energy resonances gave each planet wonderful otherworldly qualities.

There was also an interesting use of the old series’ ‘transporter malfunction’ sound effect as Saru was attempting to find solace with the planet’s ‘noises.’   The sound FX in this episode were almost another character.

Nice that Saru is given more to do in this episode.  Doug Jones continues to marvel under all of that makeup, and it was nice to see Saru attempting peaceful contact in a very ‘Star Trek-ian’ way.   The episode’s first contact scenes really made me feel ‘at home’; like a bit of the old Star Trek was finally shining through some of that darkness.   Nice to hear a bit more about Saru’s native physiology as well; the fact that his species can run up to 80 kph (to escape predators) was very interesting, and I’m curious how that ability will feature in future episodes.  Maybe someday we’ll even catch a glimpse of the kinds of predators that his species runs from…?

*  The return of ‘grumpy’ Lt. Stamets (Anthony Rapp) and the touching reasons why.

I enjoyed the scene of Stamets confessing to Cadet Tilly that he’s suffering side effects from his genetic manipulation and the interactions with the spore drive; but that he’s keeping that information to himself to safeguard his partner Dr. Culber’s career.   Genetic manipulation for anything other than severe birth defections is illegal within the Federation (Deep Space Nine, “Doctor Bashir, I Presume…”), and Culber could lose his career for his illegally modifying Stamets.   So Stamets is keeping mum on his disorientating side effects for now, as he accepts that his spore drive is necessary for the war effort.   This presents a moral/ethical dilemma for the couple and for the show, and is the kind of moral/ethical dilemma that Star Trek typically does best.   I’m eager to see how (or if?) it is resolved (hopefully without the affable Dr. Culber losing his career).

These two are making a good couple; as Tyler seems especially talented at drawing out Burnham’s latent humanity (far quicker than her tutelage under Capt. Georgiou for 7 years).  The two of them even enjoyed some quality smooching time (hehe).

It’ll be a real shame if my theory is confirmed, and we actually find out that Lt. Tyler is actually…

… Voq; the albino Klingon who disappeared shortly before Tyler’s first appearance (conveniently) in the episode “Choose Your Pain.”   I’ve listed my reasons why I believe Ash is actually Voq in previous episode recaps.    I’m also clinging to my theory that the defiant Captain Lorca will actually welcome the defecting Klingon, and work to hide Tyler’s true identity from Starfleet.  Lorca has shown a fondness for outsiders (mutineer Burnham, for example).  I’m guessing he’d find a defecting Klingon in his crew (however altered) too valuable to lock up.   We’ll see…

NOW, ONTO THE THINGS I WAS LESS THAN ENTHUSED ABOUT…

Given how quickly a sense of freedom from his natural fear-state allowed him to turn on his comrades, the question looms: can Saru ever truly be trusted?  This wasn’t like Spock in “This Side of Paradise” where an alien intoxicant was to blame (the spores of Omnicron Ceti III).   Or even the android Data in “Brothers” (when he was under the remote control of his ‘father’).   Saru was not so much possessed by the planet Pahvo as he was liberated by it.   He was released from his omnipresent fear.   So…is that all it takes for him to turn on his shipmates?  Wow… that’s a pretty low (and dangerous) threshold.   At any rate, I was kind of hoping the reason for Saru’s wanting to go native went a bit deeper than that, though I suppose it also makes the character that much more alien as well.   An unusual motivation befitting Saru’s alien nature. 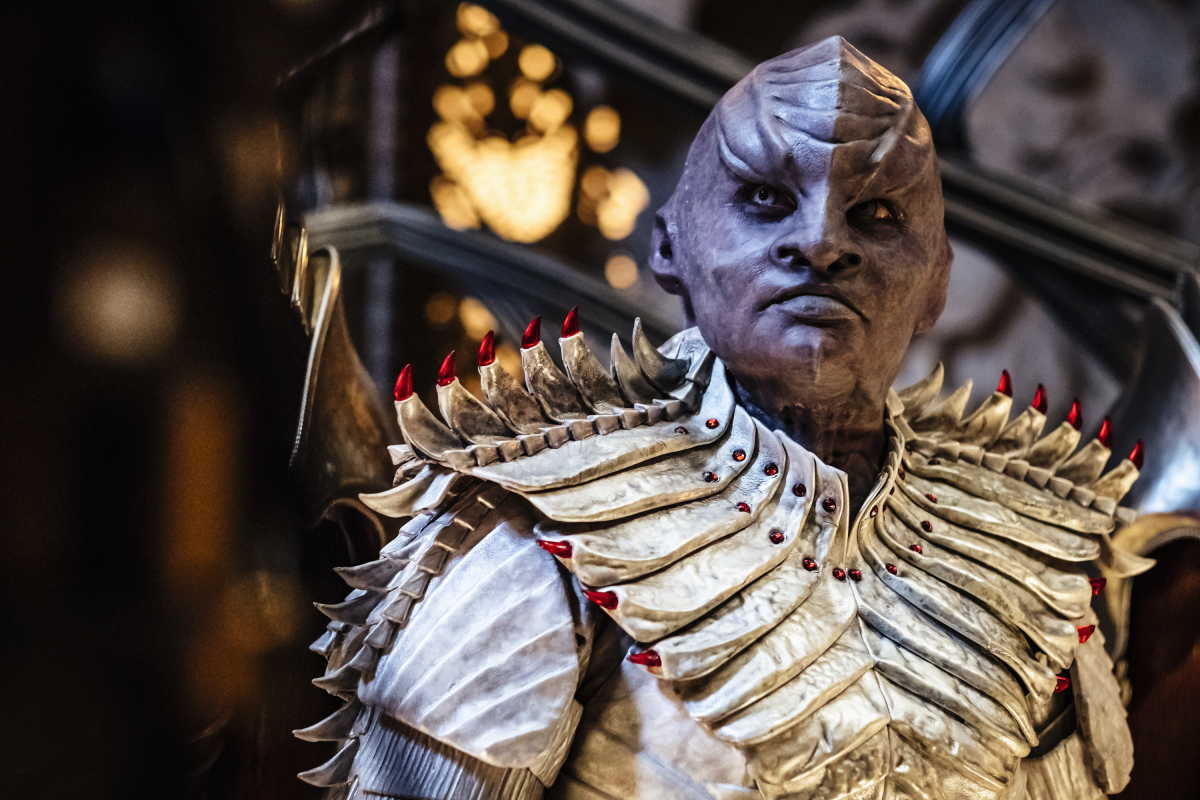 Nice scenes together (including a visceral-though-staged escape attempt), but to be honest, I’m still not sure what to make of L’Rell’s attempt at brokering a defection with the captive admiral; was it truly sincere?  L’Rell’s rage at her dead (and gutted) comrades later on seemed to definitively answer that, but her later meek submissiveness to Kol at the end had me scratching my head a bit.   Is this a plot within a plot?   Currying favor with Kol, only to kill him later?  That kind of ploy seems more “Game of Thrones” than Klingon-style behavior, but we’ll see.

And the fact that actresss Mary Chieffo can express any emotion from under all of that heavy makeup is still impressive to me.   She deserves kudos for that feat, as does Kenneth Mitchell’s Kol (above photo).

*  The planet Pahvo felt a little too much like “Avatar”’s Pandora.

The planet Pahvo was nicely realized through some lovely digital FX and location work in the Canadian wilderness, but the idea of a great unifying energy field and the sky-scraping crystalline ‘trees’ to project it felt a LOT like Eywa and the Hallelujah mountains of “Avatar.”  There were also those wisps of energy that represented Pahvo’s ‘life essence’ that were a little too similar to the floating, glowing tree sprites of Avatar.  Even the blue foliage and the pervasive bioluminescence felt very familiar.   Certainly not the first (or worst) time that Star Trek has blatantly stolen from other big science-fiction movies before, but this attempt seemed just a tad more bald-faced than usual.

An ambitious, though flawed episode.

It opens with a rousing opening space battle, offers further glimpses of Saru, Stamets, Tyler & Burnham, and we even get an honest-to-goodness planetary exploration again (even if it is exploration in the service of the greater war effort).   But there were downsides as well; the “Avatar”-esque trappings of Pahvo/Pandora, and some dense Klingon political intrigue that seemed more at home in “Game Of Thrones” than Star Trek.

“Si Vi Pacem…” is not as strong as “Lethe” or “Choose Your Pain” (two of my personal favorites of the series so far), though not as disappointing as “Magic to Make the Sanest Man Go Mad” either.   A decent, middle-of-the-road episode.

Hey, they can’t ALL be classics, right?  Even the Original Series and Next Gen didn’t have that kind of batting average.

And since this was the first of a two parter (next week’s episode being the mid-season finale), perhaps it’s best to adopt a ‘wait-and-see’ attitude when the second half arrives.

This blog, like tonight’s episode, is to be continued…