“Stranger Things” is a horror/sci-fi ‘80s period piece series created for Netflix by The Duffer Brothers (Russ & Matt), and it feels like a genetically-engineered offspring of early ‘80s-era Steven Spielberg and Stephen  King, with a generous helping of the late Tobe Hooper spliced in for good measure.

I first got into “Stranger Things” last year, and I’ll admit; I initially resisted watching it for a few weeks.  At the time, I just had no desire to get into a new series with all-new characters.  But when I opened myself to it?  I understood why everyone was jabbering about it online.   I got it.  “Stranger Things” was instantly watchable, the characters were very engaging, though the overall story was a little uneven at times; perhaps even a bit too self-indulgent.   “Stranger Things” was a nice enough surprise in that freshman year, but not without a few minor flaws.

Now the show has come back for its sophomore year and it’s blossomed into a real stunner.   The characters are much better balanced, the story is a bit more coherent, and new characters are nicely inserted into the well-oiled machinery of the show.    And as with the first year, Netflix offers all 9 episodes of Year Two simultaneously (made available Oct. 24th) making this series the perfect show for binge-watching.  I got into Year One during my daily hour on my home exercise-bike (as that situation made me a perfectly captive audience), and I did the same with Year Two; often streaming it on my iPad and even carrying it from room to room as I did bits of housekeeping business (and Halloween prep).  I didn’t want to miss a drop of this terrific show.   Ideally, the visuals of this series beg for a bigger screen, but my advice is to catch this series any way you can.

Set in a small, fictional town of Hawkins Indiana, “Stranger Things” is about a group of middle school boyhood friends find themselves involved in bizarre, Cold War-era government conspiracies involving grotesque creatures from another dimension known colloquially as “the Upside Down”; a bizarre parallel universe that exists just beneath the rural suburbs our characters inhabit.

In the first season, one of the boys “Will” (played by Noah Schnapp), was lost in the Upside Down.  And his friends, along with escaped telekinetic wunderkind girl “Eleven” (the amazing Millie Bobbie Brown) moved heaven and earth, and even a few adults, to get him back.

Winona Ryder plays Will’s frazzled, sick-with-worry mother “Joyce” and David Harbour plays “Jim Harper,” an old high school friend of Joyce’s who is now the local law enforcement.  These are the two major adult characters in a show that focuses primarily on its young ensemble cast, much as ‘80s movies like “Wargames” and “E.T.” tended to focus on theirs.  However, the adults in “Stranger Things” are NOT the absent-minded dolts we usually saw in ‘80s movies/TV shows; these adults more often work with the clever kids, not against them.

The younger characters in the show form a near-perfect, Stephen King-esque ensemble very similar to the Losers Club of King’s “It” (the book and its adaptations), or even the 1986 movie “Stand By Me” (once again based on King’s novella, “The Body”).  Each of them deserves a bow.   In this group, we have Will’s best friend “Mike” (Finn Wolfhard), outgoing “Dustin” (a very memorable Gaten Matarazzo), realist “Lucas” (Caleb McLaughlin), and of course, the sensitive, aforementioned Will; who becomes the group’s focal point in both seasons.

Will seems to be a human lightning rod for the strange goings-on in the small town and its mysterious government research group.  In year one, his disappearance is the heart of the story and in year two, his ‘possession’ provides a critical link to saving the town.

Older kids in the ensemble include “Nancy” (Natalie Dyer) who has a bit of an attraction to Will’s soulful older brother “Jonathan” (Charlie Heaton), but is currently involved with big-haired ‘popular’ boy “Steve” (Joe Keery).

All of the characters in the ensemble are well-served (especially so in Year 2), and their subplots and stories connect smartly.

THINGS I LOVE ABOUT “STRANGER THINGS” (Years 1 and 2):

This is especially impressive considering that the Duffer Bros were born in 1984 (the setting of Year 2) and presumably did all of this from research than memory and/or watching ‘80s movies.  The movie posters, songs, hairstyles, pop-culture references, technology (VCRs and walkie-talkies rule), and attitudes that are pretty much exactly as I remember from my teenage years.  The “Ghostbusters” Halloween episode in Year 2 (“Trick Or Treat”) was an absolute gas.  Other than the boys’ proton packs looking a bit too good to be homemade (cosplay wasn’t quite a thing yet), it felt authentic.   There aren’t a lot of false “Wedding Singer/Goldbergs”-style trappings, such as overly-teased hair, neon lipstick, etc.

This is a much more natural and understated ‘80s than we usually see in ‘80s-period television and movies.   As a former teen who actually grew up in that era?  I salute the Duffer Bros. for getting it juuust right.

*  The wonderfully-realized homages to all kinds of ‘80s movies/TV shows.

There are far too many references/homages in “Stranger Things” to enumerate in a single blog entry (here’s a handy primer from Time.com: Stranger Things Movie References/Time.com).

Some of the standout references (for me) in Y2 include a terrific ALIENS-inspired scene that used the pinging sound FX from the colonial marines’ tracker units, as well as ALIENS alum Paul Reiser (Carter Burke himself) watching a bank of monitors as soldiers’ helmet cams record their descent into the dimly-lit subterranean nether world.  There’s even the classic ALIENS line “Stay frosty,” thrown in for good measure.

Even Will’s possession by the “spy” consciousness from the giant rooted brain-organism beneath the town is very similar to a young Linda Blair’s ‘possession’ by a demon in that same film.

Best part of it all is not the homages themselves (which are brilliantly done); but rather how well the homages are integrated into this story.  They’re not shoehorned in; in fact, they manage to feel organic and even happily coincidental.

As noted briefly above, the cast are all superb; from world-weary sheriff Jim Harper to otherworldly Eleven (whose given name we learn was Jane; one enigmatic name for another).   And the ensemble is even better managed in Y2.   The final episode of this season “The Gate” (named after another ‘80s horror film) has a wonderful school dance scene that almost feels as much like a prom for the cast as well as for the characters; a well-earned celebration for a job well done.

It’s not hard to see why Finn Wolfard (“Mike”) was also cast in this year’s adaptation/remake of Stephen King’s “It,” since he is part of a current ensemble that is as brilliant as the young cast of “Stand By Me.”   Gaten Matarazzo’s “Dustin” is also a standout to me.   Even when his character is being a bit obnoxious, the actor himself is always charming.

This year, we saw weary town sheriff Jim playing surrogate father to Eleven as he keeps her hidden for her own safety (Jim first discovered and aided the runaway Eleven in Y1).  The father/daughter rapport between Jim and Eleven is alternately warm and severe (just like a true parenting relationship), and we feel both his frustration at trying to keep her safe, as well as her need to connect with the world, find her family, and see her friends again.

Eleven eventually escapes on a journey of self-discovery, including finding both her catatonic mother and her ‘sister’ Kali, aka “Eight”(Linnea Bertheson) in a subplot right out of “The X-Men” (with mutant kids on the run from the authorities).

It also takes a page from “Pinocchio” and the analogy of Pleasure Island, as the liberated-yet-miserable Eleven finds no solace in her newfound street family, and wants to go home to her friends (her true family). 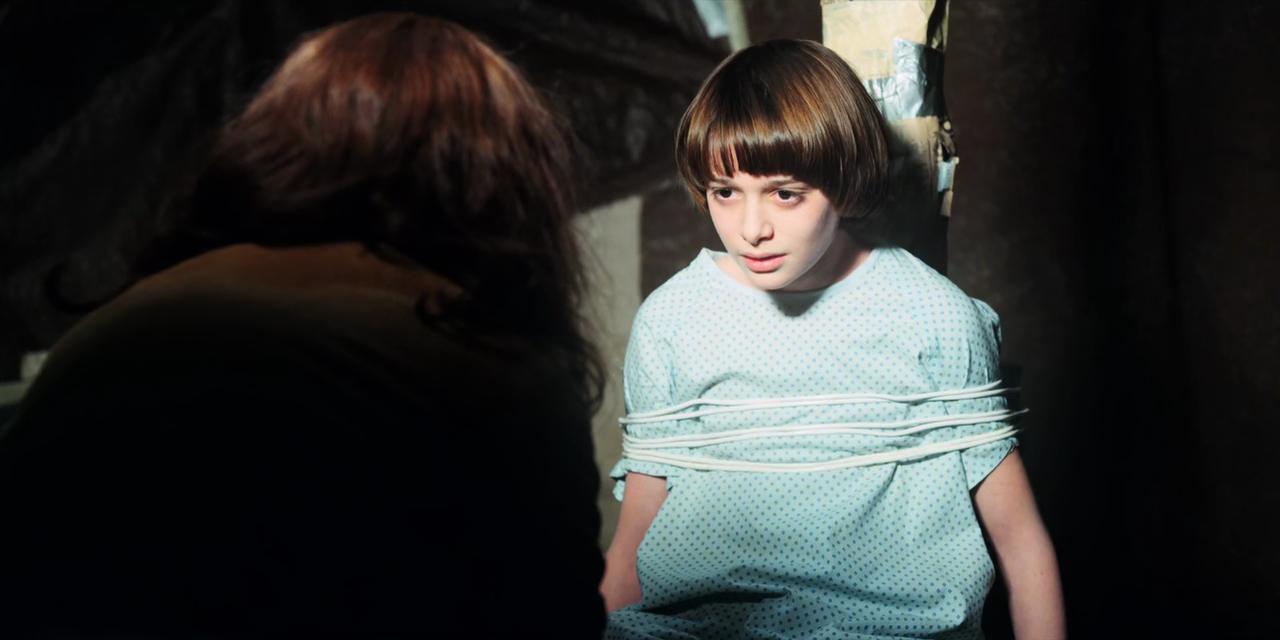 There is also Mike’s steadfast devotion to his friend Will during Will’s possession, Dustin’s adoption of a ‘baby Demagorgon’ creature (a subplot homaging ‘80s horror-comedy “Gremlins”), and Lucas’ budding (and dangerous) romance with new girl Max (that, and the Nancy/Steve/Jonathan triangle seem to reference the late John Hughes’ movies of the ‘80s).

We also see Nancy and Jonathan’s attempt to get word of what’s happening in their town to a conspiracy-nut journalist.

And most importantly, the emotional climax of Eleven finally reuniting with her friends in episode 9 (“The Gate”).   Their reunion really resonates for a show that is only a couple of seasons old.

Once again, there is more character growth/development in just nine episodes of this show than other shows typically do in a few full seasons.   “Stranger Things” truly and smartly exploits the binge-watching format for maximum character impact.   Each chapter leaves you a bit breathless for the next.   Arguably some of the drama is borderline soap opera at times (such as the love triangle between Nancy, Jonathan & Steve), but it never quite bottoms out into pure maudlin.  With only nine episodes a year, the characters have little time for too much navel-gazing, and are usually too busy driving the story’s forward momentum. “Lord of the Rings/Rudy” alum Sean Astin joins the ensemble as aptly-named Bob Newby, the Radio Shack-employed boyfriend of Joyce Byers; Bob’s former high school crush and current frazzled mother of Will & Jonathan.  With Joyce’s personal issues, she isn’t as emotionally available for him as he would like, but that’s okay; Bob is very patient.   He is also a nice bait-and-switch on the usual broken-family ‘interloper’ character.  Usually, ‘mom’s new boyfriend’ (ala “Lost Boys”) is some kind of evil, ulterior-motivated creep.

Bob is none of that; he is simply a genuine nice guy.   And his sacrifice near the end of Y2 is quite heartbreaking.

A COUPLE OF MINOR NITS ABOUT “STRANGER THINGS”:

The year ends with us knowing very little about Max’s backstory, other than she lives in what appears (?) to be a foster home with her deeply douchey foster ‘brother’ Billy.

The actress certainly seems as solid as any the other cast members, but I wanted to know a bit more of her character’s backstory.  What exactly is Max’s relationship with Billy?  And just who are their ‘parents’?  Ahy did they leave California?

Maybe this one is less a nit, and more of an opportunity for further exploration next year.  I’ll try to be patient.

*  Couldn’t they have rounded the season up to a full ten episodes??

That’s just the greedy part of me, I suppose; I like nice, round numbers.  Maybe even a nice dozen (?).   Nine episodes just feels just a little short to me; especially since we won’t get new episodes for at least another year…. 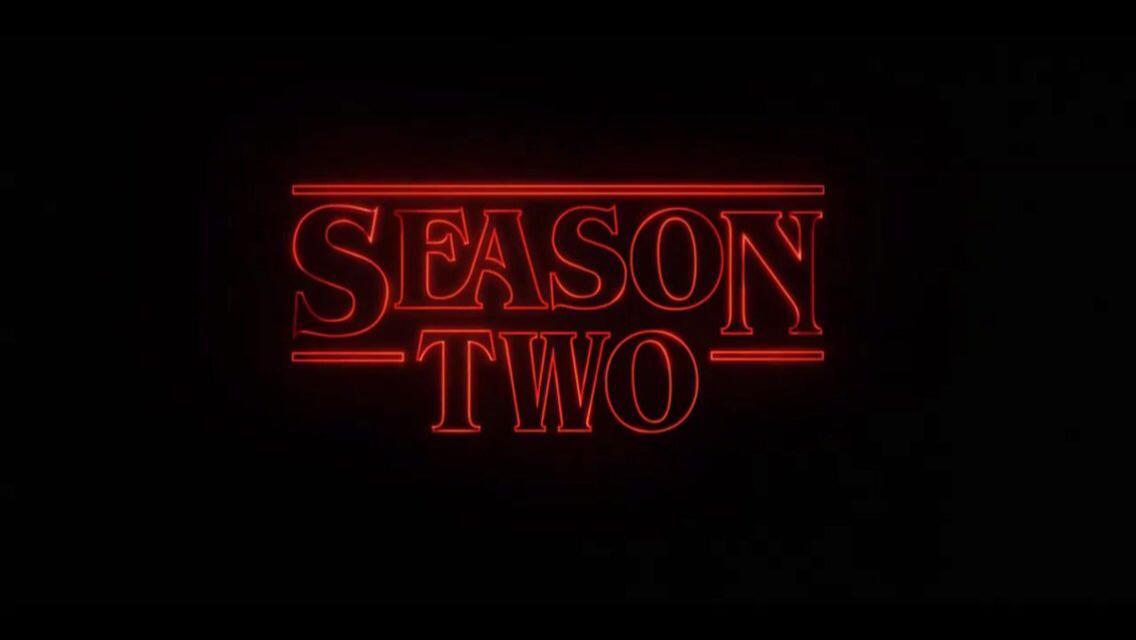 The shorter seasons could also be seen as an incentive for people who don’t want to commit to a lengthy series run (as I initially didn’t), and I understand that angle as well.  But a couple more episodes a year wouldn’t hurt…

If you’re a fan of Stephen King (“It” “Stand By Me”), ‘80s-era Steven Spielberg (“E.T.” “Poltergeist”), or even horror-mystery series such as the vintage 1974 classic “Kolchak: The Night Stalker” (or its descendent “The X-Files”) you will not be disappointed.

If you don’t get all of the carefully-woven (and multitudinous) references/homages?  Don’t worry; at the very least you’ll enjoy a solid, engaging, character-driven show that will both entertain and deliver a few choice scares. 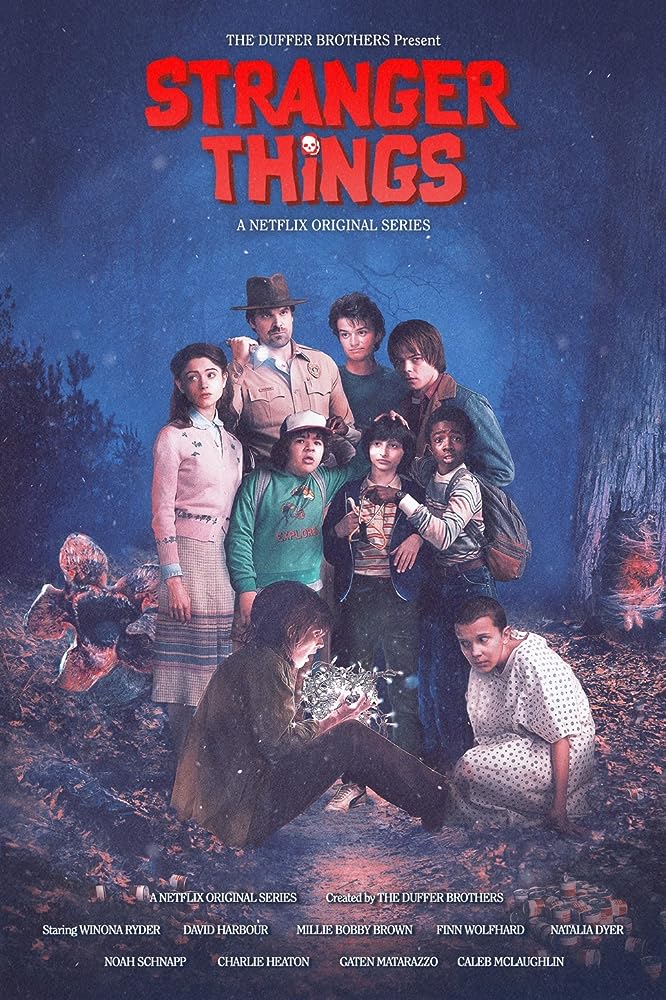