I’m of a certain generation (Gen Xers) who remember the Charlie Brown “Peanuts” holiday specials (with the Christmas and “Great Pumpkin” specials being standouts), and the stop-motion Rankin-Bass produced Christmas specials such as “Rudolph the Red-Nosed Reindeer”, “Santa Claus Is Coming to Town”,  “Little Drummer Boy” and others. These were fond childhood memories of TV holiday cheer.   As warmly welcoming in suburban childhood at Christmastime as cocoa with marshmallows in front of a fireplace. 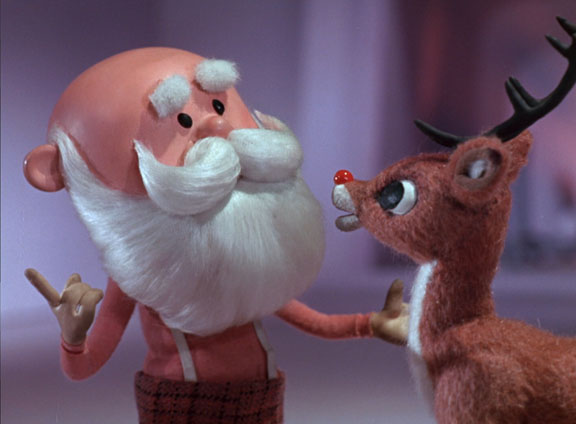 And then ….there was the oddity known as the 1978 Star Wars Holiday Special.  The SW Holiday Special was a damned odd mix of comedy (sort of), music, dancing (yes, dancing numbers) and ‘adventure’ (using the term very loosely) that was much more in the feel of “The Donny and Marie Show”or “Sonny & Cher” than anything from the Star Wars universe (and yes, that includes the prequels).

Unlike a typical SW spinoff, such as the Clone Wars cartoons of today, this weird piece of cult television featured ALL of the original cast of the 1977 movie.  Mark Hamill, Harrison Ford, Carrie Fisher, Peter Mayhew, Anthony Daniels, the late Kenny Baker, and even Darth Vader voice actor James Earl Jones (voicing over footage from excised clips from the original SW movie; SW77).   The familiar John Williams’ fanfare blast was there in spurts, as well as a cartoon featuring future SW bad guy Boba Fett (this was two years before “The Empire Strikes Back”).   There was even an oddly phony-looking matte painting from the late and usually very talented Ralph McQuarrie showing tree houses on Chewbacca’s home planet of Kashyyyk (below). 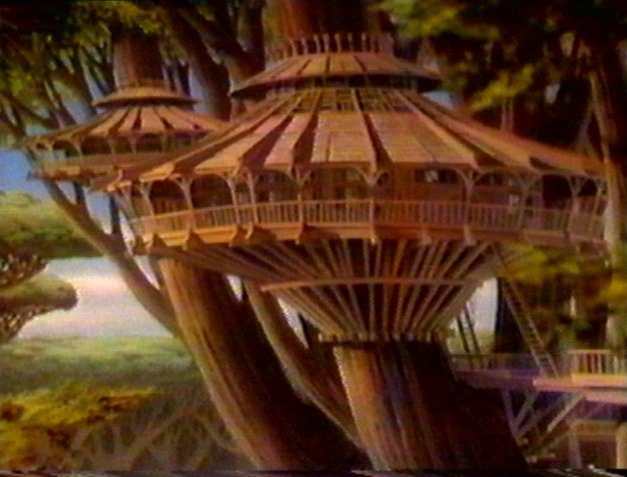 But there was also a lot of truly out-of-place and bizarre crap thrown into the mix as well; As Chewie races home to see his family in time for “Life Day” (Wookiee Christmas), his old dad Lumpy (no joke) is watching the showgirl-costumed Diahnne Carroll cooing and serenading him in a virtual reality vignette that has a deeply creepy, ‘grandpa’s-watching-porn’ feel to it.

Speaking of the Wookiees, there is a seemingly interminable sequence of Wookiee domestic life, with Chewie’s wife (Malla) interacting with their son (Itchy) in which they moan, growl and grunt for over ten minutes… without subtitles of any kind.   The 90 odd-minute running time is filled with moments like this.  Needless to say, there would be no future Ewok Easter Egg Hunt on Endor, Rebels Rockin’ New Year’s Eve, or Mos Eisley Cantina Halloween Special (though Mos Eisley does make an appearance in The Holiday Special, with the late “Maude” star Bea Arthur tending bar, no less.  Seriously what the hell, CBS?).   George Lucas disowned the final product and it’s never been repeated in broadcast. But thanks to the magic of the interwebs, you can see it in the Youtube link below, if you have both the courage and the endurance:

But not all geeky attempts at holiday appropriation are so utterly misguided.  There are the Doctor Who Christmas Specials; a tradition from the franchise that actually originated in the earliest William Hartnell-starring years, with Hartnell’s Doctor clumsily breaking the 4th wall a bit by wishing the audience a Happy Christmas (link below).

The 2005 revival of Doctor Who began featuring intentional holiday specials, beginning in 2006 with the Tenth Doctor (David Tennant) in “The Great Christmas Invasion”, when the Doctor ‘regenerates’ just as Earth faces a massive alien invasion on Christmas Day.  Later specials saw the Doctor helping a ‘runaway bride’, trying to stop a future spaceliner Titanic from impacting present day London, and even Matt Smith’s Doctor helping a WW2 widow and her kids by playing Willie Wonka to them, with a huge nod to C.S. Lewis (the title, “The Doctor, the Widow and the Wardrobe” is a bit OTT).  Other Christmas specials have varied from the deeply Christmas-mired (a scene specific quasi-remake of “A Christmas Carol”) to far less-so, such as last year’s “Husbands of River Song” in which the holiday felt like little more than a piece of set decoration than story element. 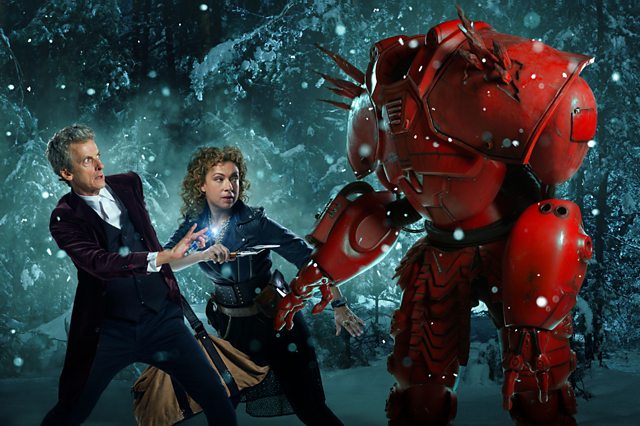 This year’s Christmas Special (the second for current Doctor Peter Capaldi) is rumored to be much more “American” in nature, based upon the previews (it features superheroes).  It’s on my DVR’s drive, and I plan to watch it very soon (does it really have to air on Christmas day?).   At any rate, the DW Christmas specials are a nice little stocking stuffer for Doctor Who fans the world over, and while some are more successful than others, they’re usually something nicely diverting to look forward to during the holiday season.

Even the Star Trek franchise has dipped its pointy-toed boots into the holiday spirit a bit, though not quite as wholeheartedly as the good Doctor.

Original Series’ Star Trek featured the first season episode “Dagger of the Mind” where Kirk recalls a past dalliance with a crew member, ship’s psychiatry specialist (the aptly named) “Dr. Helen Noel”, that took place after the ship’s Christmas party… or did it?   At any rate, the “Noel” name and the Christmas party flashback are about as close to Yuletide spirit as the original series ever got… unless you count cool TOS Christmas toys, such as my recently acquired bluetooth-enabled TOS communicator replica.

Star Trek: The Next Generation also had a few interesting Christmas references, including Capt. Jean-Luc Picard (Sir Patrick Stewart) and his android Ops officer Data recreating a scene from Dickens’ “Christmas Carol” on the ship’s VR ‘holodeck’ in the otherwise non-Christmas-y “Devil’s Due”, in which Picard has to defend a planet’s (and his ship’s) right not to be enslaved by a would-be devil (played by the devilishly naughty Marta DuBois).

And, of course, there is the Christmas-referencing Star Trek film “Generations” (1994), somewhat unique among the other prior and future Star Trek movies.  “Generations” is an oft-maligned, but sentimental favorite of mine for reasons I’ll get into in a bit.

The movie’s story isn’t necessarily Christmas-themed in nature, but it does have an extended Christmas sequence where Picard is thrown into a dreamlike dimension known as “the nexus”, wherein ‘time has no meaning.’ Within the nexus, Picard is able to celebrate a veddy, veddy British, Dickensian Christmas (interesting choice for a ‘Frenchman’ such as Picard).   Picard is surrounded and loved by a fantasy family he’d never known due to his solitary life as a starship captain.   The themes of family and mortality weigh heavily on the captain; as earlier in the film he’s devastated to learn of the tragic loss of his brother and nephew.

The idea of Picard living in a fantasy, strings-free existence is also reminiscent of the original 1964 Star Trek pilot, “The Cage”, in which first Enterprise captain, Christopher Pike (the late Jeffrey Hunter) is lulled into a fantasy existence by scheming alien Talosians.

The nexus dimension doesn’t seem to have a conscious agenda as Pike’s Talosians did, but is more ST’s incarnation of heaven; a timeless fantasy where one can spend eternity with loved ones, both real and imagined.   Picard, realizing nothing in this nexus truly matters, finds lost Capt. Kirk (William Shatner) residing there as well, as Kirk was presumed MIA 78 years earlier in the movie’s prologue sequence aboard the Enterprise-B (a late 23rd century forerunner of Picard’s 24th century Enterprise-D).

Given Star Trek’s famed secularity, all three captains (Picard, Kirk, and Pike in “The Cage”) choose to leave their fantasy existence to face reality… warts and all.    During the climactic battle in the 24th century, Kirk dies ‘making a difference’ by saving millions of lives.  Picard buries him in a cairn on a mountaintop overlooking a gorgeous alien desert (the spectacular real-life Valley of Fire in Nevada).   The scene is unexpectedly poignant; the audience would expect Kirk to die in a blaze of glory fighting off 1,000 Klingon ships… but instead he meets his end in personal combat, and is laid to rest on an alien hilltop on an unknown planet somewhere ‘out there.’   Many fans were outraged and even writers Ron Moore and Brannon Braga had issues with their movie, but I loved it.    It felt deeply personal to me then, in a way I’ll discuss a bit more below.

“Generation”‘s themes of mortality and loss really spoke to me in 1994.   I was at a personal crossroads in my own life that year, which was the year I’d suffered both a debilitating motorcycle accident and the loss of my own father.   Picard’s losses and Kirk’s death really spoke to me at that time.  The hopeful, typically optimistic ST-ending also held the promise of continuance and renewal; as Riker and Picard beam away from their crashed and demolished USS Enterprise-D, their future adventures were pretty much assured.   In the face of loss and tragedy, life ‘boldly goes’ on.   It was also on a 2nd or 3rd viewing of the film that I’d taken a newfound friend from work to see it with me and we’ve remained close friends to this day.   “Generations” was one of my favorite Christmas gifts I’d received in a personally tumultuous year; a shot in the arm that I really needed at that time.  “Generations” is admittedly uneven as far as ST movies go, but to me it’s an underrated gem.

The holidays are also a time when, if you’re lucky, your friends will get you all kinds of cool geeky toys to play with!  In what has become something of a tradition in our circle, my friends usually invite my wife and I over to engage in toy lightsaber duels with their young son, who is currently a 5 year old Star Wars fanatic par excellence.   And walking along our local downtown Festival of Lights, I’ve seen street vendors selling little toy lightsabers to children (and their parents).   I’ve received/given many Doctor Who, Star Trek & Star Wars toys/ornaments as gifts over the years.  I’ve given my wife a customizable sonic screwdriver once, and my sister has gotten her Dalek earrings and a Tardis purse.

So between Doctor Who Christmas specials, a nearly forgotten Star Wars TV oddity, Star Trek’s holiday references, toy communicators, sonic screwdrivers, and other geeky holiday doodads, it’s safe to say that fandom-themed holidays are perhaps less solemn or religious than ‘traditional’ ones.  But they also remind us to keep alive the child within each of ourselves; to recognize it, nurture it, and to never lose touch with it.   And in a season that reminds us to celebrate and cherish children, is that such a bad thing?  Not to this old geek.