The immortal words spoken by the late William Hartnell’s First Doctor (to his granddaughter Susan, played by Carole Ann Ford) kind of echo how I feel whenever I leave the annual “Gallifrey One” Doctor Who convention in Los Angeles.

My wife and I have been attending this con for only four years now, but it’s one of my favorites.   The smaller, more intimate venue remind me of some of my earliest conventions I’d attended in Pasadena.   It’s hard to believe I was a convention ‘virgin’ until my wife and some friends of ours took me to my first in Pasadena in 2001 (at the tender age of 34!).  Gallifrey One is more intimate, and with less ‘convention sprawl,’ so you really get to scour every corner of the place.  You also get quality meet-and-greet time with some of the attendees as well.

To recap, these are my posts of Days One and Two:

Gallifrey One, day one; an adventure in space and time…

Gallifrey One, Day Two: The Doctors will see you now…

By the third day, my old arthritic, middle-aged body was pooped.  I got to the convention a bit later, around 11 am or so, convinced that this day would be little more than a last glance at the dealer hall, and maybe take a few more cosplayer pics.

Well, of course that didn’t happen.

I did take a lot more cosplay pictures (of course), but I also decided to take in a few more panels and really get my money’s worth out of this convention.

First, I took in a smaller discussion panel; “Companions That Never Were.”

The panel was supposed to discuss actors who almost became series’ companions, or early companion casting choices that were rejected, etc.  But after a short while, it became a free-for-all discussion of Doctor Who companions in general.  I did raise my hand during the Q&A to offer a counter view on the Doctor ‘not needing companions if the writing was good’ (whatever that means, right?  Good is deeply subjective).  I countered that the companions aren’t just audience surrogates (a point made much earlier), but that they also serve to keep the Doctor grounded.  I cited the example of the Doctor becoming a bit power-mad in “The Waters of Mars” (a solid David Tennant-era entry that follows the ‘base-under-seige’ format of some of best of the classic series).   The Doctor decides (on his own) to undo the predestined tragic fate of the mid-21st century human Mars settlement “Bowie Base” (aptly named for the talented artist who gave us the “Spiders from Mars,” as well as the tragic spaceflight epic “Space Oddity”).   Other examples (though I didn’t cite them) could be earliest companions  Ian and Barbara, who often acted as the moral compass for the First Doctor.   At any rate, the panel was interesting, and it was nice to see that almost every companion (yes, even Adric) had their own cheering section.  In fact, one panelist admitted without any guilt whatsoever that Adric was her favorite.  Many of the Big Finish audio drama comparisons had surprisingly vocal supporters as well.   It was a lively, energized discussion, and I enjoyed it very much.

My next panel was the “Time of the Doctor” and it took place in the main theater; the panelists were Brian Minchin (DW exec producer), host Edward Russell (brand assistant, BBC), Jemma Redgrave (“Kate Stewart”), David Bradley (played both William Hartnell as well as the new First Doctor, “Game of Thrones”), Matt Lucas (“Nardole”) and Steven Moffat (writer/producer/showrunner “Doctor Who,” “Sherlock” “Jekyll”).   The panel mainly discussed the anxieties abound in casting new Doctors, as well as the processes of developing new characters.   Matt Lucas discussed how Nardole went from a one-off in “The Husbands of River Song” into a full-on companion of the Doctor’s.   Lucas was very witty and engaging, and it was easy to see why the Doctor Who powers-that-be kept him on after his initial appearance.

It was a great panel… that is, until the audience Q & A.

The questions were generally polite and reasonable, until one fan, speaking to Steven Moffat, really uglied up the place.  She asked why Capaldi’s 12th Doctor “acted like a d!ck”,  to which Moffat coolly replied, “You were saying something about acting like a dick?”  The nervous audience bursted into applause for Moffat’s witty rebuttal, but the questioner rudely plowed ahead; undeterred by the audience’s growing anger towards her.  She then asked if Capaldi’s Doctor ‘being a dick’ “was a problem with the writing, or did you plan for him to get better later on?”  Moffat ignored the rudeness of her query (she deliberately insulted his work!), and abruptly stated that the Capaldi warming arc was indeed planned.   Duh much, lady??

The rude young woman then went back to her seat, amid a flurry of audience dagger stares.   I was embarrassed for Moffat, the rest of the panelists, and for all of Doctor Who’s North American fandom.   This was truly awful.

It’s not unusual for many fans at Q&As to get nervous and blurt out inappropriate things.  I once saw a fan tell Natalie Portman at San Diego Comic Con 2005 that he’d recently converted to Judaism for her (!).  But every once in a blue moon, you see spoiled, rude, entitled fans who… well, in the girl’s own words, act like dicks.

My philosophy for meeting celebrities (or anyone you don’t know) is, as Wil Wheaton would say… 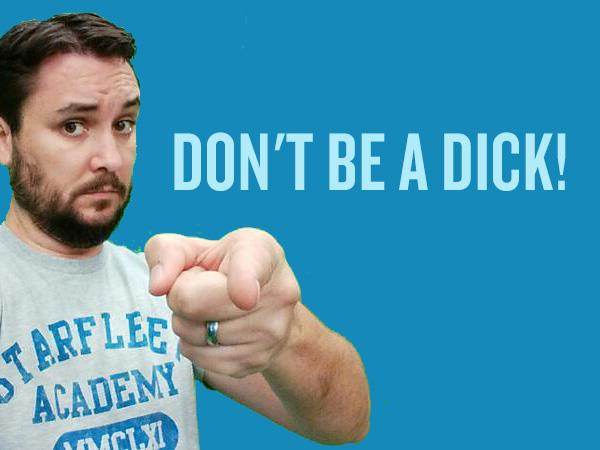 It’s a genuine shame when fans meet celebrities and make them regret taking the gig in the first place.   But the Moff handled the situation with humor and grace; no doubt a lot more than I would’ve shown if I were in his place.

The next panel was a reunion/discussion of the final episode of the classic Doctor Who series, “Survival” (1989).   The panel, moderated by David J. Howe (of Telos Publishing, in a wildly cool jacket) reunited Sylvester McCoy (the 7th Doctor) with his companion “Ace” (Sophie Aldred, who looked terrific), “Cat woman” actress Lisa Bowerman, episode writer Rona Munro, script editor Andrew Cartmel (whom I’d had several pleasant encounters with during the convention), and BAFTA winning special effects artist Mike Tucker.

There were many humorous anecdotes; including a bit about Sylvester McCoy taking a real pounding in a pile of cement-like dirt, and a production rigger joking (?) about “using” a nearby stray cat in place of an ineffective animatronic version.   Despite problems with fake fur, cat-like contact lenses, excessive heat, unworkable animatronics, etc. the episode had a lot going for it in my humble opinion; and it finished the classic series on a high note, despite the production difficulties.   Sylvester McCoy made a nervous joke about how he was concerned that hugs might soon be banned in America, so he and Sophie Aldred got in one last sweet embrace.   The affection between them is as palpable as it was back in the days of the series.   Andrew Cartmel and Lisa Munro also shared very interesting insights into their respective relationships with the Doctor Who showrunner-of-the-time, the late John Nathan-Turner.   Munro found him personable and easy to talk with, whereas Cartmel’s take on him was a bit less so.   Also discussed were the earlier scenes in “Survival” of Ace returning to her hometown, and how they seem to foreshadow the Doctor’s ‘rescue’ of shopgirl Rose from her seemingly dull life in the suburbs in 2005’s “Rose.”

The “Survival” panel was the last one of the day (and weekend) for me, and I spent the remainder of the day taking more pics of cosplayers…

Afterward my wife and I had a lovely dinner in the Marriot’s “Hangar 18” restaurant, and I snapped a couple new cosplay pics (the final two in the sections above).  Also saw Steven Moffat sitting at the bar of the restaurant busily working his iPhone.   Oh, how I wanted to walk up and get in a meet-and-greet, but I didn’t want to bother the man, so I demurred.   Maybe another time…?   I’d already bumped into him once at 2013 Comic Con (while I was in my Fred Flintstone costume…which he smiled at), but I hardly consider that a real meet.

One final funny bit; on the way back up to our hotel room, my wife and I shared our elevator with a robot… the hotel’s delivery robot.  Seemed the perfect way to end a science fiction convention, and the little bot would’ve been right at home on Doctor Who…

My personal highlights of the convention were:

*  The quality time my wife and I spent with our friend Jen.  She’s a very busy lady, and we don’t see her often enough, so it was delightful to talk and catch up.   Thanks Jen!

*  Seeing the cast and crew of Star Trek Continues again.  I’ve met most of them at various conventions over the years, and they’re always a pleasure.  The STC cast and crew are vivacious, fun people; and their pure passion for what they do is infectious.  Michele Specht?  You are a sweetheart, and my wife really enjoyed meeting you; same to Rekha Sharma, Todd Haberkorn, Chris Doohan, Lisa Hansell, Cat Roberts and all the rest.  You folks are the best!

*  Meeting Andrew Cartmel, story editor of the final seasons of the Doctor Who classic series.  A lovely man.   He got a real kick out of my “Stone Trek” cosplay.  I ran into him several times during the convention, and they were each pleasant encounters.

7th Doctor and costar of the Hobbit movies, Sylvester McCoy.

Actor David Bradley, who bears and uncanny resemblance to the late William Hartnell, whose Doctor he’s recreated for the current series. He also costars in the popular “Game of Thrones” series.

*  Meeting two Doctors in one morning.  Sylvester McCoy (one of my personal favorites) and David Bradley (the ‘new’ First Doctor, whose resemblance to the late William Hartnell is jaw-dropping…).  Pretty sweet!

*  And, of course, the cosplayers!   In fact, I took so many cosplayer pics that I think it’s best if I just linked my Flickr album: Flickr album for “Gallifrey One 2018.”   I tried to caption each pic in the album (perhaps not always accurately, so I’m asking forgiveness in advance).  I hope you enjoy them.

My one regret?  My friend Nick and his family couldn’t make it out this year.   All the best to you, Nick.