The latest episode of Star Trek Discovery, “The War Without…” answers a few nagging questions from last week’s “What’s Past Is Prologue” , and there are some rich character moments, but I still had a few nagging issues.

The Discovery returns to its native ‘prime’ universe (though I still don’t quite believe this is the same prime universe of TOS Star Trek… ) only to discover that they’re nine months late… and the war with the Klingons is all but lost.

Saru (Doug Jones) remains acting captain, and the ship’s registry markings have been reconfigured to match their original prime versions.   Ash Tyler (Shazad Latif), through the ministrations of the captured Klingon L’Rell (Mary Chieffo) has been exorcized of his Klingon persona Voq, but he remains deeply guilty regarding his actions.  Michael Burnham (Sonequa Martin-Green) still refuses to see him.

Another Federation starship emerges from warp, and an armed boarding party, led by Admiral Cornwell (Jane Brook), beams aboard; they boarders initially thinks Discovery is the Terran/mirror version of Discovery, which we learn was destroyed in the prime universe and lost with all hands.  Through a mind meld with Saru, ambassador Sarek (James Frain) learns that this is indeed the missing prime universe ship and crew.  They are then welcomed back by Cornwell.   Sarek is gratified to see his ward Michael Burnham as well.

During a debriefing, Admiral Cornwell informs the officers of Discovery about the state of the war, and how the Klingon Houses are competing for power within the Empire by using Federation targets as fodder.   The Federation, using traditional techniques, seems unable to deal with the brutality and randomness of their attacks.  The entire subject of the mirror universe is also ordered heavily classified (hence the reason no one knew of its existence in TOS’ “Mirror Mirror”). 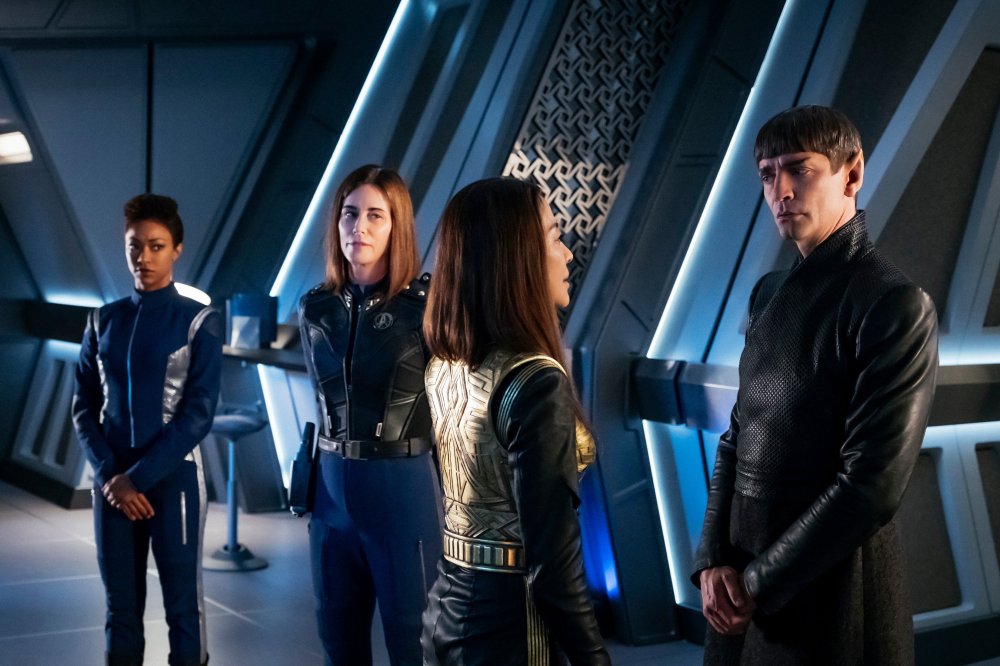 The captured mirror-Georgiou (Michelle Yeoh), who is now a classified ‘guest’ of the Federation, meets with Admiral Cornwall and Sarek, and offers them important tactical information regarding the Klingons in exchange for her release back to her universe.   Cornwell tells her that they may not be able to get her back to the mirror universe; and that they’re going to set a course for Starbase One, where Georgiou will remain a Federation guest until further notice.

A recovering but ostracized Ash Tyler is given the cold shoulder by most of his former shipmates following his actions under the influence of the Voq persona, including his murder of Dr. Hugh Culber; the lover of Lt. Paul Stamets (Anthony Rapp).   Stamets confronts Tyler, and it’s obvious he still harbors much resentment towards the former Klingon infiltrator.

Cadet Tilly (Mary Wiseman) notices Tyler by himself in the mess hall, and takes a seat next to him.  Soon others follow, and the now ‘human’ Tyler is welcomed back by his forgiving shipmates.   Later Tilly tries to persuade Michael into talking to Tyler herself, even if it’s only to say goodbye.

Discovery arrives at Starbase One to find it occupied by one of the rival Klingon Houses, with all Federation hands lost.  Cornwell freezes in a moment of shock and indecision, but Saru orders the ship to warp away.

Cornwell, who was once helped by L’Rell when she was her captive, visits the Klingon prisoner.  Cornwell attempts to gain understanding of the Klingon mind and wonders if there is a middle ground.

After a heated exchange, it is clear that once blood of humans has been ’tasted’, war between Klingons and the Federation cannot be stopped. 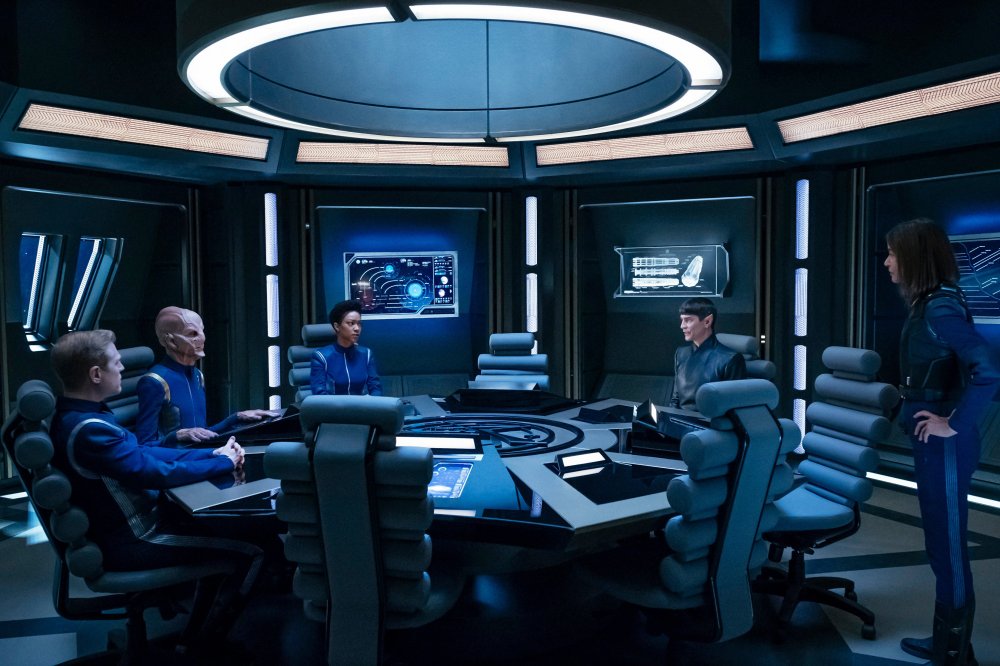 Michael, after conferring with the mirror-Georgiou, arrives at Cornwell’s quarters with a proposal.   The Klingon homeworld hasn’t been visited by humans in over a century (the Earth ship Enterprise in the 22nd century), and Federation intel on that world is a century out of date.  Burnham proposes to jump Discovery (using its spore drive) inside of a subterranean cave on the Klingon homeward and release intelligence probes into the planet.

There’s one little glitch; Discovery’s supply of spores have been used up in her jump home, and the ship’s crop cannot be re-cultivated in time.   Lt. Stamets has a possible solution; they could terraform a suitable lifeless planet using fast-acting probes, and rapidly harness that world’s jumpstarted crop of spores quickly.

The terraforming plan is approved, and immediately implemented.

Michael goes to see Tyler, and though she believes that his Voq half is gone, she’s too traumatized following his violent assault to accept him back easily.  She tells Tyler that he has to seek redemption on his own, just as she has since joining Discovery’s crew.

A deal with the devil is made in exchange for mirror-Georgiou’s assurances of victory against the Klingons; mirror-Georgiou will pretend to be the prime-Georgiou, with a false cover story about being recovered from Klingon captivity.

In the final moments, mirror-Georgiou is ‘welcomed’ back into command as the new (temporary) captain of Discovery by her bridge crew, only some of whom know her true identity as a mirror-imposter…

Complex feels about this one, though generally positive ones.

This was a Star Trek ‘bottle show’; most of the action takes place aboard Discovery, with only a brief CGI sequence of the spore planet’s ‘genesis.’

This was an episode that answered questions, and offered many terrific character moments, but there were a couple of choices made that felt really wrongheaded to me.

More on that in a bit…

A few things I liked about “The War Without…” :

*   A few important questions were answered.

We learn that the mirror-Discovery, upon entering the prime universe, was indeed destroyed.  We learn that prime-Lorca is also most likely dead.  We learn that Tyler is definitely not Voq anymore (though he retains memories of what he did under his influence).  We learn the nature of the Klingon war with the Federation; that the different Houses are competing and vying for control by randomly racking up Federation targets.

^ And we also finally learn why the mirror universe was never known to Capt. Kirk and his officers prior to the events in TOS’ “Mirror, Mirror”; its existence was heavily classified.  That actually makes sense.   I’m grateful the writers didn’t leave some of these nagging threads hanging till next year.

The first one to welcome the previously ostracized Ash Tyler back into the fold is Cadet Sylvia Tilly, who truly embodies some of the best ideals of Starfleet and the Federation; namely forgiveness and compassion.   Even I’m still pissed at Tyler for murdering Culber, but I love what Tilly has done in this episode, and how her actions influenced others to act the same.   She’s showing herself to be that future leader she will no doubt become someday…

*  Having Georgiou back, even if only her mirror– version, is still awesome.

*  The characters got nice opportunities to shine. 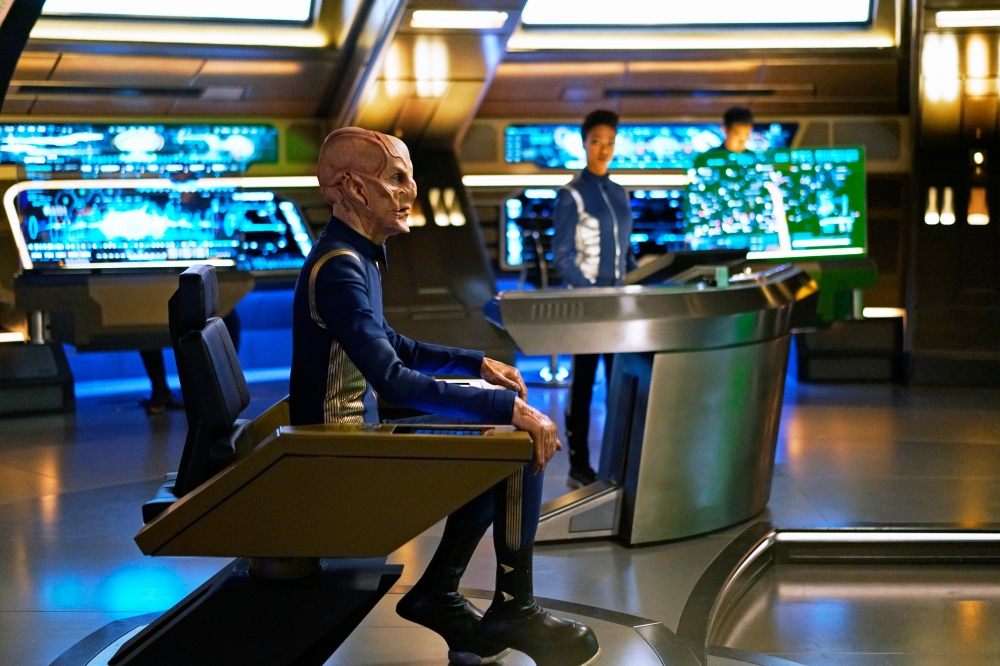 Cornwell phasering Lorca’s fortune cookies was dark comic gold; also loved her scene with captive Klingon L’Rell in the ship’s brig.  “Acting Captain” Saru continues to impress. Tyler and Burnham’s breakup scene had all the requisite emotional fireworks and both actors truly delivered the goods.   I’m increasingly appreciative of James Frain’s take on the Sarek character.   Lt. Stamets’ terraforming of the lifeless planet was probably just the tonic for him, after the tragic loss of Dr. Culber.

Lots of great character bits all over this episode.

And a few nagging issues with “The War Without…”:

Her moment of indecision at the loss of Starbase One.  Her admission, in front of her subordinates, of her relationship with the dead mirror-Lorca (not a good idea).  She already seemed questionably unfit for trusting the oh-so-shady Captain Lorca in the first place, let alone sleeping with her subordinate officer.

*   Making mirror-Georgiou an acting captain of Discovery is a SERIOUSLY bad idea. 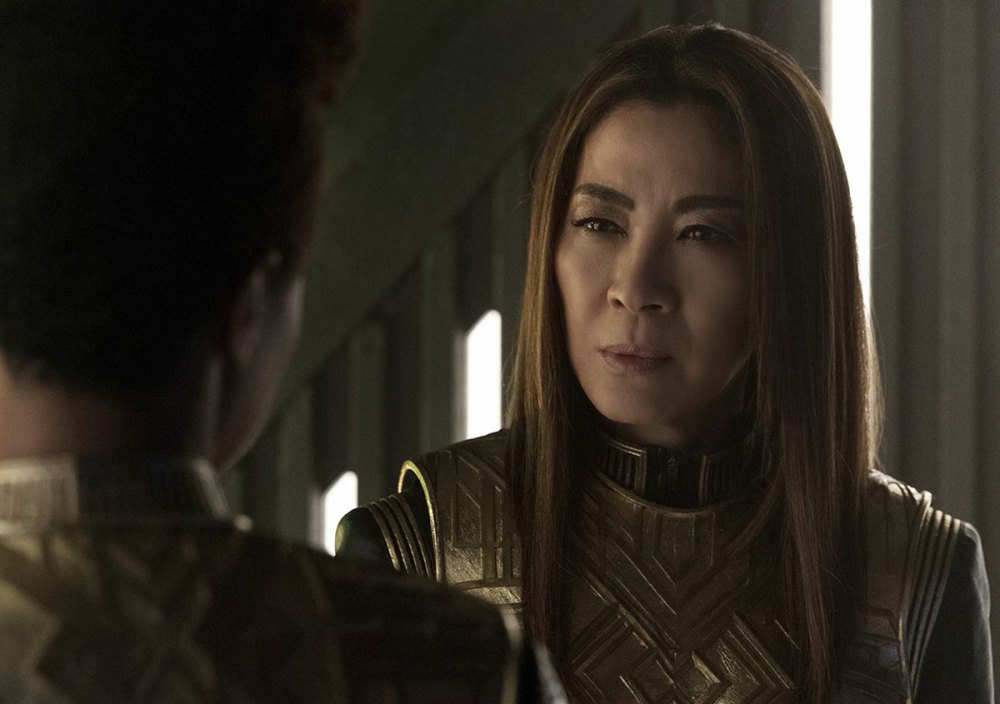 I love Michelle Yeoh, but can you REALLY trust another bloodthirsty tyrant from the mirror universe to take command of Discovery yet again?   I mean, for chrissakes, couldn’t they find another way to get the intel from mirror-Georgiou without giving her the center seat?

*  Was it just me, or is ambassador Sarek just a little…out of character? 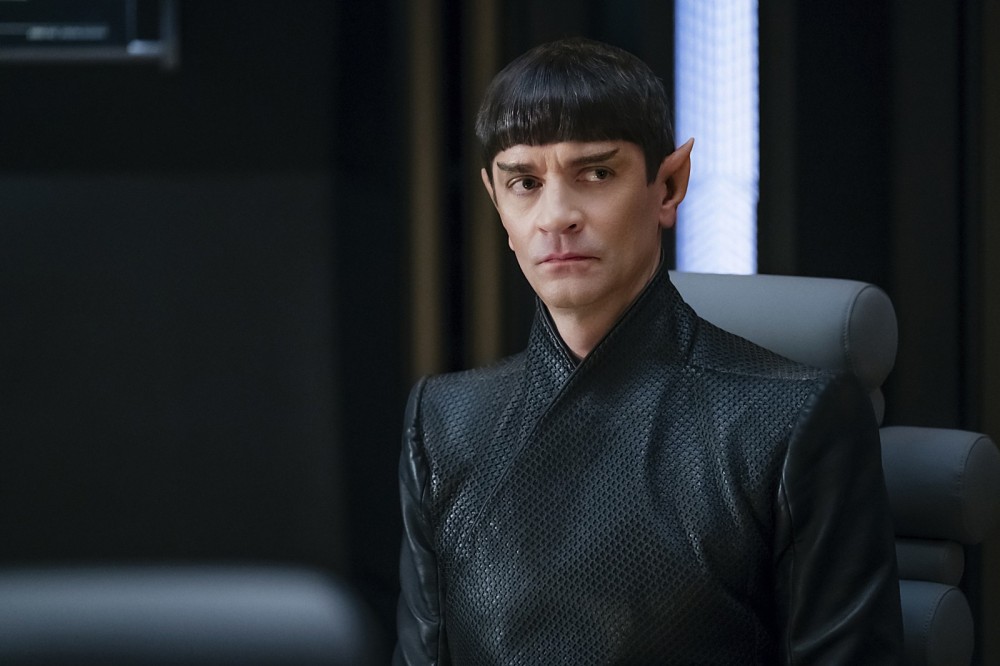 This is not meant as an affront to actor James Frain, who’s doing a wonderful job with the role as written, but is this really the same Sarek who had an 18 year feud with his biological son Spock for joining Starfleet because he believed that ‘peace should not depend on force’?   Now he seems to be (in the words of “The Godfather”) a ‘wartime consiglieri’; working right alongside Starfleet armed boarding parties, and even doing interrogative mind-melds.  His duties and actions in Star Trek Discovery sometimes feel less like the dignified, rigidly pacifist Vulcan ambassador we saw in TOS’ “Journey to Babel” and more akin to tactical officer Tuvok from Star Trek Voyager.

*   The Klingon war of this series is just too big to have been virtually ignored in TOS and later Trek series.

I don’t know how they’ll work their way out of this particular continuity wormhole, but it’s a big one.   TOS’ first Klingon episode, “Errand of Mercy”, made it somewhat clear that  up till then, there’d never been a full-out war between the Federation and the Klingons…but in DSC, the war is all over.   The Federation is partly occupied, a third of the fleet is destroyed.  Yet… this war stayed out of the Federation history books somehow??

I’m thinking this plot-hole will have some kind of time-travel way out, but that would be dangerously close to Star Trek Voyager’s maddening ‘reset button’, which tended to keep almost anything dramatically consequential from remaining permanent.   Here’s hoping the show finds a creative way out of his trap without resorting to reset button-style storytelling…
Summary.

I really enjoyed the in-depth character mining done in this episode, but some of the directions and actions taken are questionable, at best.   That’s one of the issues with serialized television; it’s frustrating to guess where the road is headed, and to have faith that the show will (somehow) get there.   That’s also one of the curiously invigorating things about serialized storytelling… not knowing what’s next.

Here’s hoping the next episode, the season finale, addresses some of the nits, because I’m always open to the possibilities of better days ahead for Star Trek.

Call me a hopelessly optimistic Trekkie; but given Star Trek’s inherent optimism, aren’t we all?