IMATS is the International Makeup Artists Trade Show, and a majority of the convention space is devoted to cosmetic/glamour makeup (which my wife and our friend eagerly capitalize on).

However, moving beyond the dealer hall (filled with booths from makeup vendors like Kryolan, Moda, Purlisse, Bioderma, etc.) there is another part of the convention devoted entirely to movie and television FX makeups.   That’s where I get hooked.   Within that area are three specific sections of personal interest to me; the annual “Battle of the Brushes” competition (where various makeup artists compete to do spectacular creature makeups), the Main Stage (where a group panel, single speaker or makeup demonstration is usually happening) and of course, the Makeup Museum…

The Makeup Museum is usually the very first place I head towards once I set foot at IMATS.  The exhibits in the museum are simply extraordinary; representing current pieces from recent films and TV shows, such as “The Shape of Water”, “Star Trek Discovery,” “American Horror Story” as well as classic makeups from artists like the late Dick Smith (“The Exorcist” “Amadeus”).

The inner-kid in me who grew up reading about such makeups (and their creators) in the pages of “Famous Monsters of Filmland” “Starlog” “Fangoria” and “Cinefantastique” magazines threatened to have a full-on geek-out in this place.   A true makeup fan could spend hours in that tiny corner of the convention; it’s a small section of the convention, as the pieces within it are simply stunning.  My strategy is usually to photograph everything, and then review it all later at my own glacial pace once we’re home.

Just hover the cursor over some of these photos to see their captions: 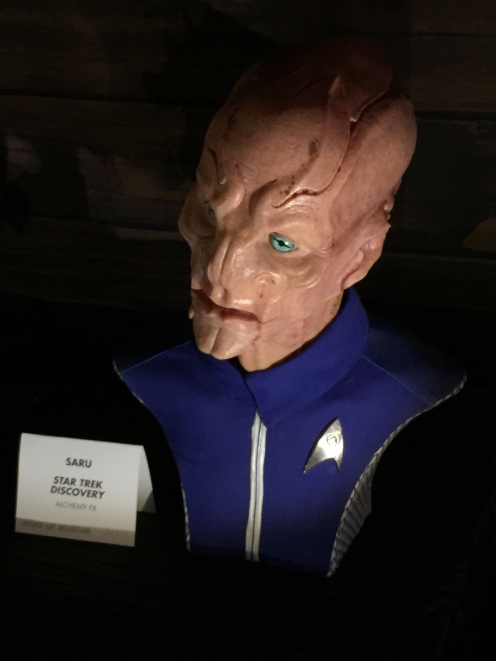 At the museum I also saw makeups from Gary Oldman’s transformation into Winston Churchill for “Darkest Hour.”  While I’ve not yet seen the film, I’ve seen the makeup of the film and it is remarkable.

I would revisit the museum several times throughout the day.  Truly amazing stuff! 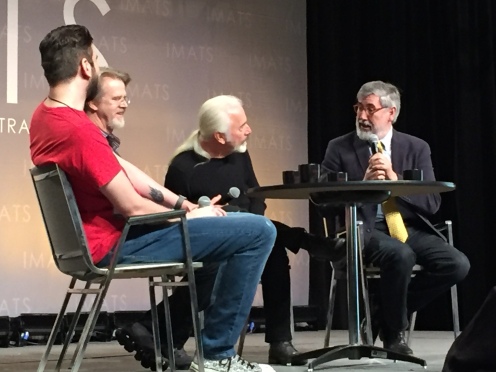 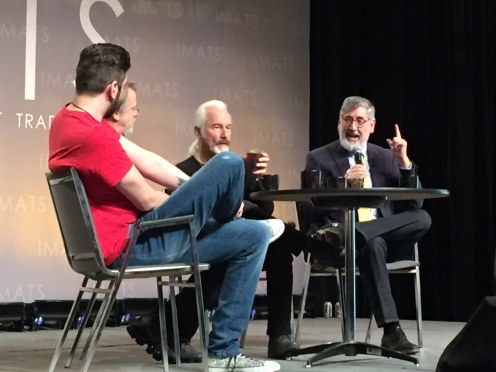 After my initial tour of the museum, I settled in to get a seat in the main theater to watch a panel discussion with director John Landis (“Animal House” “Thriller” “Coming to America” “Blues Brothers”), the aforementioned makeup legend Rick Baker, and Tom Hester (“Thriller” “Harry and the Hendersons”).  I had a second-row seat as Baker and Landis talked about their earliest collaboration (on a low-budget movie when both were 20-21 year olds in early 1970s California).   Baker also talked about living with his parents at the time, and having to bake his earliest makeup appliances in his mother’s oven (Landis joked about her pies tasting like foam rubber).

Both Baker and Landis had many stories to tell about working with Michael Jackson, whom both described as a quiet, shy kid who endured the makeup with relative ease.   And both Baker and Landis commented about Jackson’s sudden boldness that took over when he was performing his famed music and dancing.  Landis also told a few off-color quotes from the late Vincent Price (who did a brief role in “Thriller”).   Years after completing “Thriller”, Price later met Landis at a now-defunct music store in L.A. and reportedly said (when the earliest Michael Jackson scandals broke), “Well, what do you think of our friend Michael?”   Landis said he didn’t believe the sexual misconduct allegations, to which a bitterly underpaid Price replied, “Well, he’s already f–ked ME.”   Just trying to picture Vincent Price saying that in his velveteen voice was a workout for my imagination!  Needless to say, it was a colorful, funny and lively panel discussion.

I later ran into Rick Baker briefly, and got to shake his hand (after washing my own hands moments earlier, thank goodness!).  I was a bit starstruck as I texted my wife, who was off with our friend buying cosmetics elsewhere.   This was Rick-freaking-Baker (!).  And he shook my hand…. holy CRAP!

Anyway, before I sat down for the Baker/Landis panel, I’d bought a book I’d had my eye on for a while; Oscar-winning makeup artist Joel Harlow’s “Star Trek Beyond: Makeup of Joel Harlow” with the intent of getting it signed later on.   I’d met Harlow briefly in Las Vegas last summer at the annual Star Trek convention and he was every bit as affable, kind and personable when I met him again at IMATS.

He not only signed my copy of the book (I was first in line…years of convention practice), but Harlow also ensured that I got it signed by his stepdaughter Ashley (who played the ornately shell-headed alien “Natalia” in Star Trek Beyond) and his Star Trek movie collaborator, fellow makeup artist Norman Cabrera.   Three signatures for one book!   And I can’t say enough kind words about Harlow; a nice guy who’d seemingly make time to talk to  just about any or all of his fans.

After getting my book signed, I ran back to the main theater (which was close-by) and grabbed a seat to watch a makeup demonstration by former “Star Trek Next Generation”/”Deep Space Nine” makeup artist Thomas E. Surprenant and “Star Trek Continues” makeup artist Lisa Hansell, as they worked to transform actress Amy Rydell into the “Romulan Commander” from the classic Star Trek series episode, “The Enterprise Incident”… a role originally played by Rydell’s own mother, actress Joanne Linville.  Rydell had also played the role in two episodes of the online series, “Star Trek Continues.”

Linville herself attended the demonstration and sat right across from me, and Rydell smiled when she noticed her mother in attendance.  It was a nice moment to witness, as a mother watched her lookalike daughter transforming into a role she herself made famous to Star Trek fans.   I even assisted Linville a bit as she struggled with a stubborn backpack and helped her retrieve a glossy photo of herself in the role for a comparison at the end of the demonstration.  I was more than happy to help.

The Romulan mother/daughter duo graciously posed for a pic for me afterward.   I felt privileged to witness such an historic little Star Trek happening, as well as a sweet mother/daughter moment.

After taking a few more completed and near-completed makeup photos from around the convention (*ALL of my IMATS photos are in the links at the bottom of this post), I settled in for the final panel of the afternoon; the makeup panel for Fox’s sci-fi ‘dramedy’ series, “The Orville.”

I feel an increasing affection for this show, which I have to admit, I had initial mixed feelings about.  It’s grown on me to the point where I just think of it as “Star Trek-Lite”; half the calories, but same great taste.

The panel was led by KNB Makeup Studios cofounder Howard Berger, who also worked on one of my favorite (crime-drama) horror films, “From Dusk Till Dawn” (1996).  The panel essentially discussed the speed and prodigious quantities with which the alien makeups had to be generated for the show.

I saw a few of the heads on display in the Makeup Museum earlier and they’re very elaborate and sophisticated, especially a series that is consciously trying to emulate a slightly less-sophisticated 1990s-era look.  In my humble opinion, the show’s makeups are stunning.   The makeup team deserved every bit of applause that they received.   Also in attendance at the panel was actor Peter Macon, who plays the alien crewman (and deadpan one-liner generator) “Bortus.”   And yes, Macon’s voice is really that deep; it’s not an affectation.   Macon himself is also an artist as well; I’d love to see samples of his work someday…

After the panel, the assembled makeup artists and Peter Macon signed a magazine dust jacket that was created by Makeup Magazine specifically for the convention.  I, of course, had bought mine earlier in the day (again, that Comic Con training comes in handy...) and had it signed as well.   I used the signing as an opportunity to tell Berger how much I enjoyed his work on “From Dusk Till Dawn,” and I asked Peter Macon if we’d ever hear Bortus actually do his karaoke rendition of Celine Dion’s “My Heart Will Go On” (one of many genius Bortus moments).   Macon said he’d hope that we’ll get a definitive answer someday as to whether or not Bortus can sing…

Throughout the convention, I took a few pics of various makeup jobs, and here was an interesting Star Trek makeup that I managed to catch both in early stages and at completion: 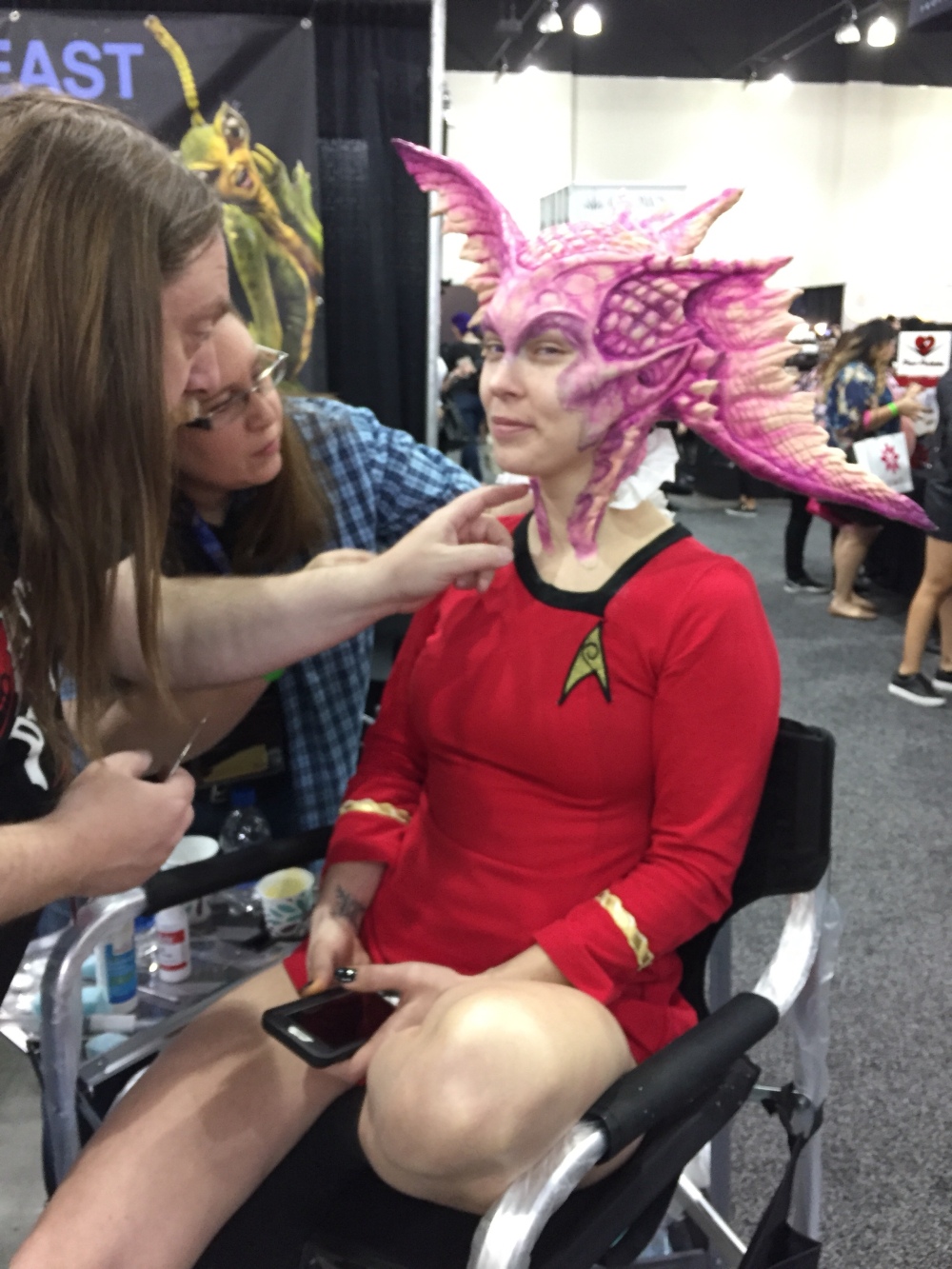 Well, that’s the sum of my Saturday January 13th spent at IMATS Los Angeles (nee: Pasadena) 2018.   It was an amazing show, as it has been for the past four years we’ve attended.

…as well as a link to last year’s blog post (which has links to all of my previous IMATS Flickr photo galleries as well):

IMATS LA: I’m not makeup–er, making this up

If I didn’t have pics of my wonderful experiences at IMATS, I’m not sure I’d believe it myself… you really can’t make this stuff up!