Guillermo del Toro (director/producer of “Pan’s Labyrinth,” “Devil’s Backbone,” and the “Hellboy” movies) directs and co-writes (along with Vanessa Taylor) a Cold War fairytale that exists in a surreal, stylized early 1960s that brings to mind the TV series “Mad Men,” as well as some of the earlier, better films of the Tim Burton canon (namely “Edward Scissorhands”).

That surreal, fairy tale vibe is enhanced by a slightly exaggerated period setting, as well as an opening/closing narration by ‘Giles’ (Richard Jenkins, of “The Visitor”), a commercial artist who tells the story of his best friend and neighbor Elisa Esposito (a Geraldine Chaplin-like Sally Hawkins); a good-natured, independent mute cleaning woman who works in a top secret Baltimore laboratory, along with her coworker/friend Zelda, played by the always-solid Octavia Spencer (“The Help” “Hidden Figures” ). 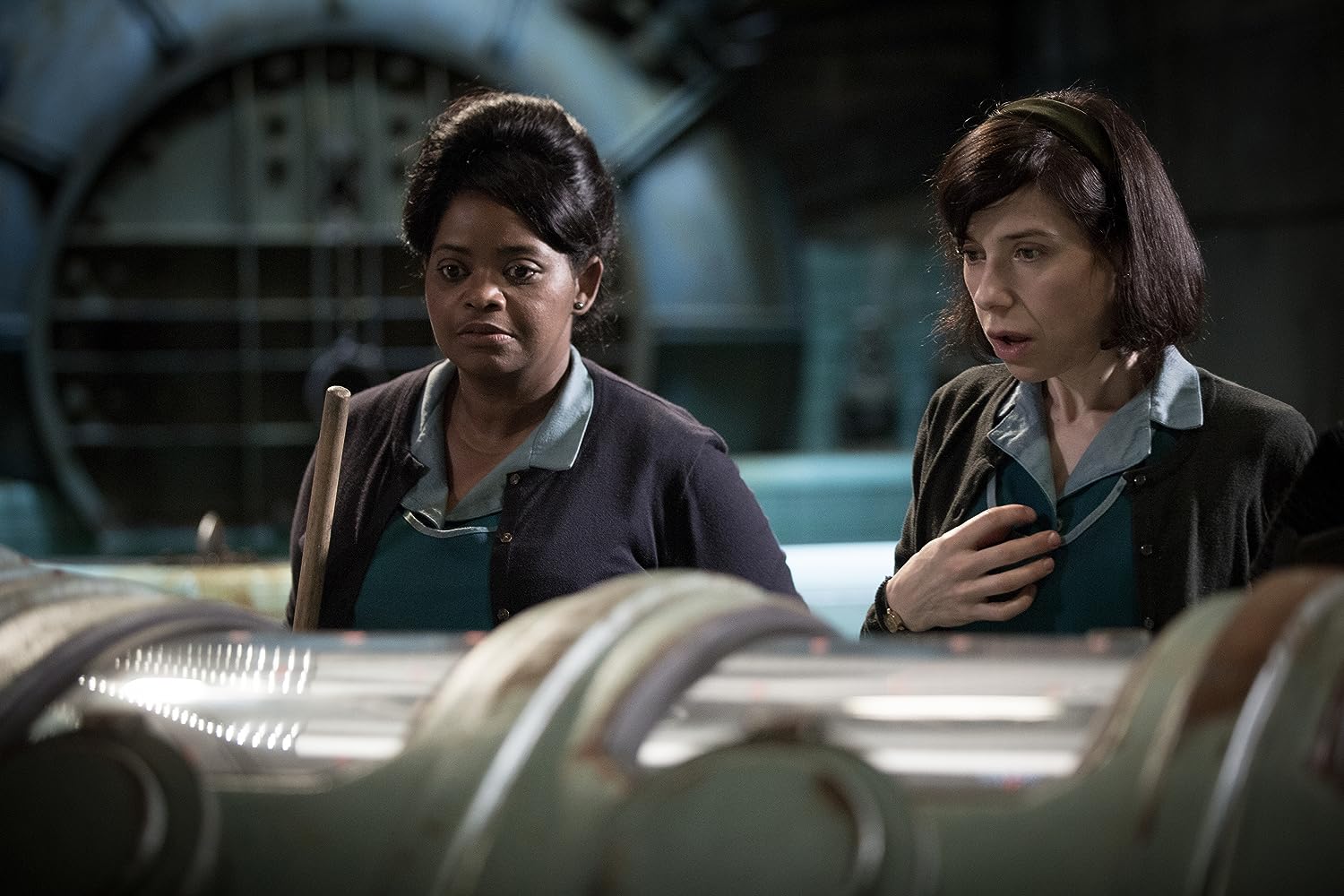 One night while cleaning, Zelda and Elisa see a large, water-filled tube containing a new ‘asset’ being brought into the lab.  The asset is an amphibious being removed from its native South American habitat (much like “The Creature From The Black Lagoon”), where it was worshipped as a god by the locals.  The US government is seeking to exploit the amphibious creature’s dual, air/water breathing capabilities for its space program.  The mute Elisa finds herself instantly and empathically drawn to the mysterious gill-man (played by del Toro staple Doug Jones, in a brilliant physical performance).

The obstacles between Elisa and the amphibious object of her curiosity (and later affection) are the creature’s captor, cruel G-man Richard Strickland (Michael Shannon; in full-on bastard mode) as well as secret Russian agents, who have a mole (played by Michael Stuhlbarg) inside of the top-secret lab.  Strickland’s hatred for the creature is further exacerbated when it unceremoniously severs two of his fingers (which are surgically reattached and increasingly necrotic… a physical reminder of the evil Strickland’s own decaying humanity).

The Soviets want the ‘asset’ for themselves of course, but would settle for just preventing the Americans from having it.

Elisa and Giles also discover that the gill-man seems to have unusual healing and regenerative properties as well (shame that the Americans and Russians didn’t want to exploit that aspect of the creature; which they were unaware of, due to their shortsightedness…).

As Elisa witnesses the wanton torture of the creature at the hands of Strickland (using an electric cattle prod-like device), she desperately hatches a plan to rescue him (with the help of Giles and Zelda), and eventually release him out into the Baltimore docks, where he’ll reach the open sea using rain as cover. 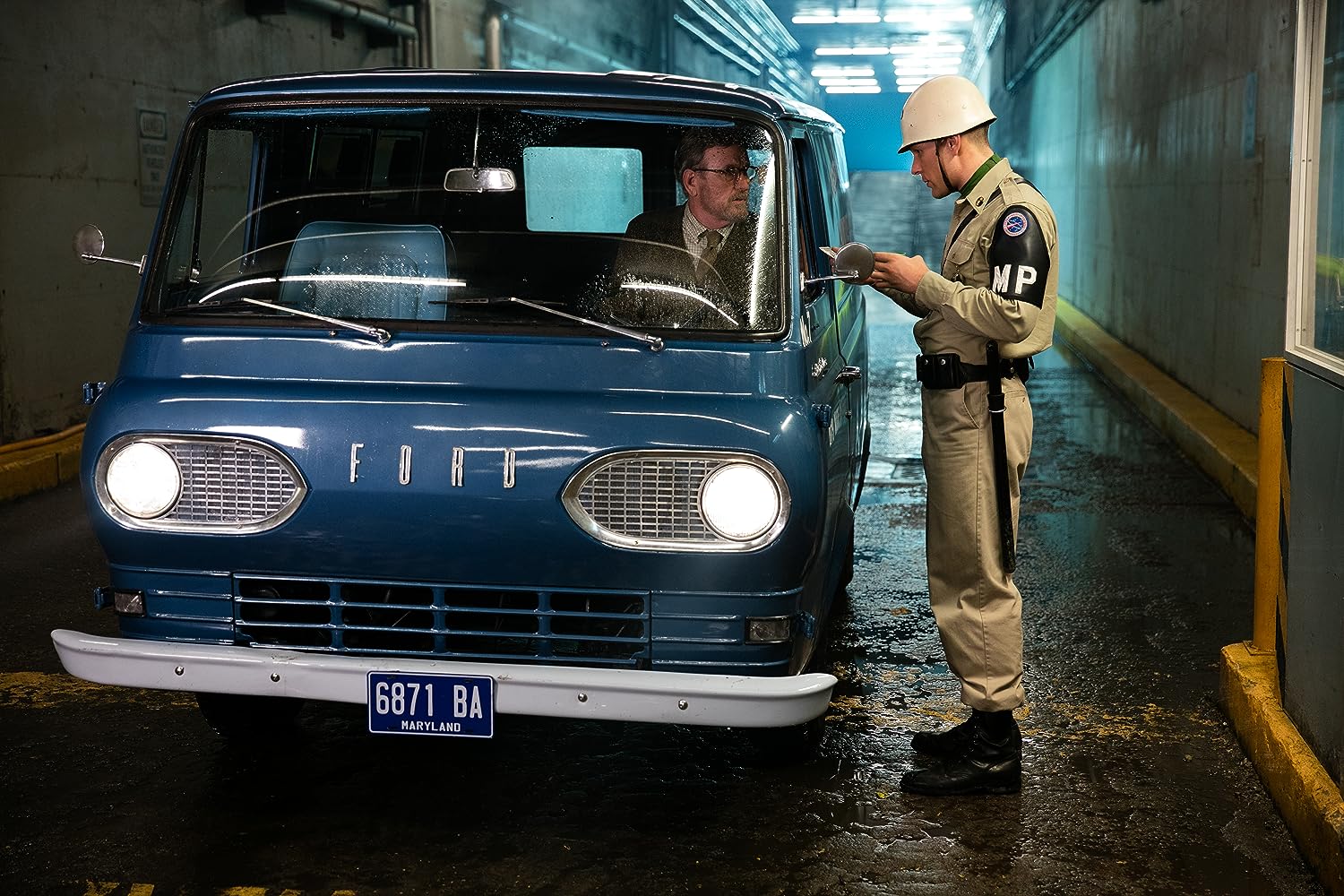 After their barely-successful escape from the lab, Giles and Elisa harbor the amphibian (he has no onscreen name) in her bathtub.  It is there that Elisa and the creature take their relationship to the next level in her now-flooded bathroom (!).   It is far more romantic onscreen than it sounds in print, trust me… 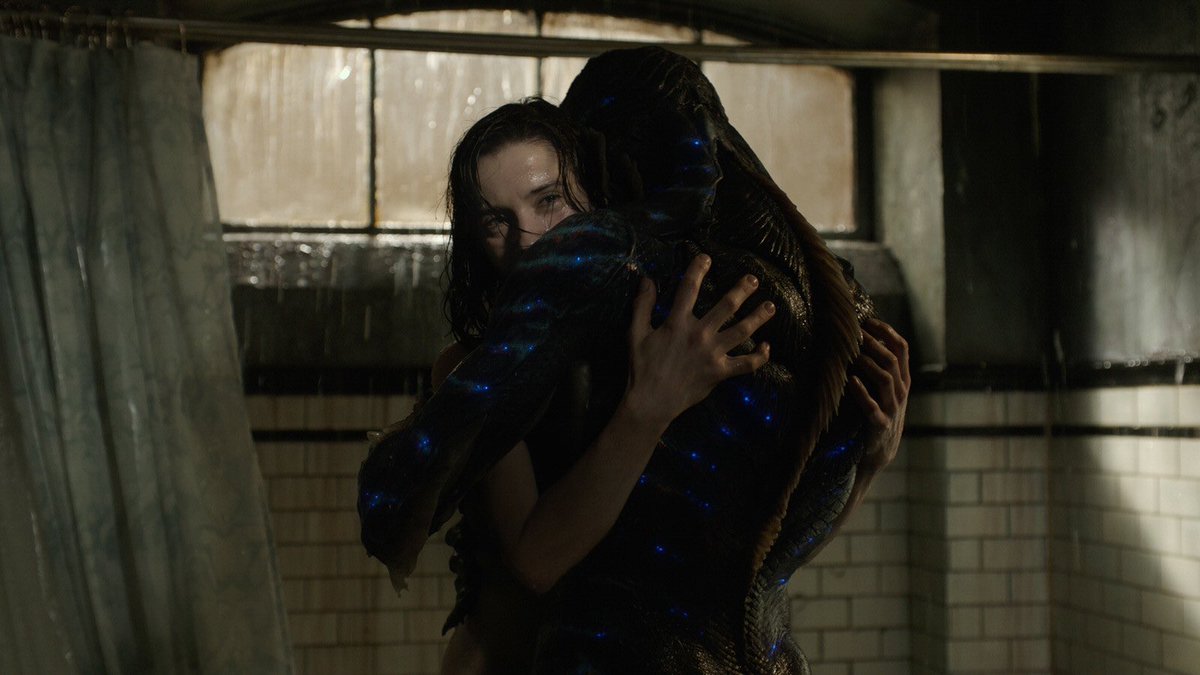 Their plans to release the amphibian into the open sea don’t quite go off as hoped, and there is a final confrontation at the docks…

You can probably imagine the rest (the movie’s posters illustrate it as well…).

“The Shape of Water” is easily one of my favorite films of this year (along with that other must-see, “Get Out” ).   I’ll attempt to list all of my reasons why, while the movie is still fresh in my brain…

The main characters are all very memorable, and each have their moments in the film to shine.  Elisa, Giles, Zelda, and the amphibian are almost an adult “Wizard Of Oz”-style collection of societal underdogs; a mute, a gay man, a black cleaning lady, and an amphibian-man (!) in early ‘60s Baltimore who challenge a tyrannical system in order for one of their own to get home (and for love).

And given the film’s just-over two hour running time, there is sufficient (and well-used) wiggle room to develop each character beyond just a trait, or a stereotype.   We see Giles’ outreach of friendship to his favorite local baker rebuffed by the latter’s homophobia, as well as a look into Zelda’s married life.  We even visit with Strickland’s “Mad Men”-like family, who live in an affluent suburb that he despises. 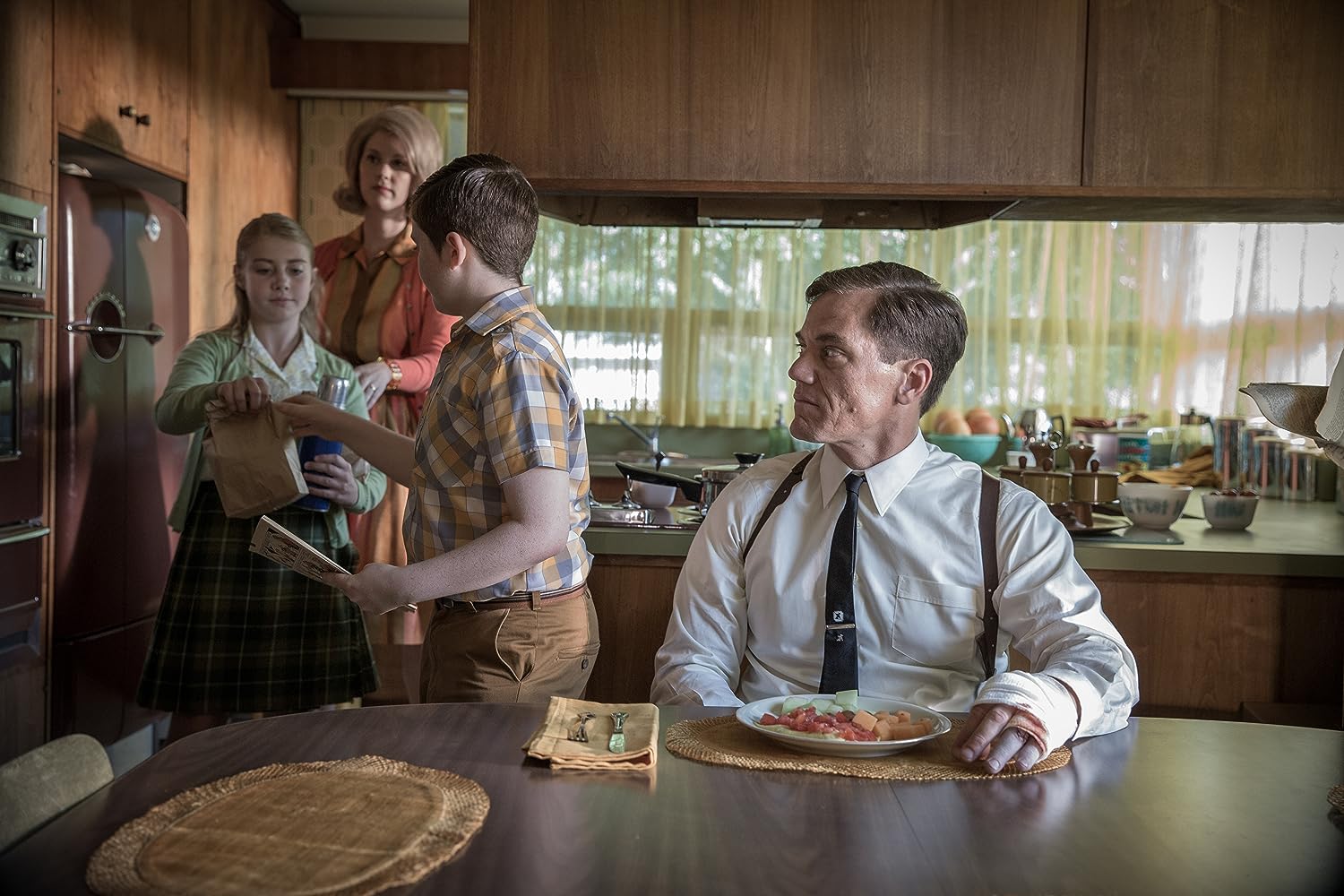 That each of the main characters get such development is a credit to the writing and the actors who bring them to vivid life.

And Doug Jones’ mimetic performance (with some vocalizations done, in part, by Guillermo del Toro himself) does more with his graceful body language and movements than many actors do with their full skillsets.

*  The look and cinematography.

The early ’60s Baltimore recreated in the film is so vivid and quirky that it’s almost another character.  From the old-style movie house at the bottom floor of Giles and Elisa’s apartment building to the “Hellboy”-ish government lab; it’s all very stylized.  Elisa’s apartment is almost like something out of Puccini’s “La Boheme.”  As I wrote earlier, it very much reminds me of the earlier, better days of Tim Burton. 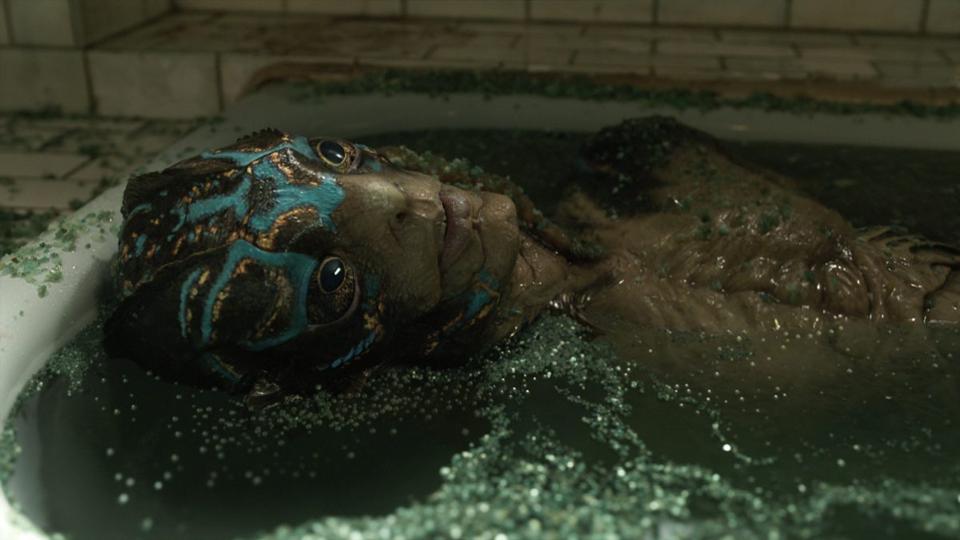 Achieved mainly by practical means, with only minor CGI augmentation (the blinking eyelids, the regenerative currents, etc), the amphibian’s makeup is jaw-dropping.

If they ever attempt to do a remake of 1954’s still-impressive “The Creature from the Black Lagoon”?  I can’t imagine them achieving a better result than what is achieved here.

Another quick round of applause for Doug Jones, who is a modern-day Lon Chaney (the man of a thousand faces).   That he can gracefully endure so many hours of such makeups and still elicit memorable performances is a testament to his artistic skill and immeasurable patience.

My wife and I had the pleasure of meeting Jones at 2012 Comic Con in San Diego.  We were already fans of his from “Pan’s Labyrinth” and his Abe Sapien from the “Hellboy” movies (he is also currently playing the alien science officer “Lt. Saru” in “Star Trek: Discovery”).

*  Diversity as a strength.

At a time when it’s needed most, we see a group of seemingly disenfranchised peoples banding together for the sake of love, and not once does it feel cliche or cloying; it feels honest, and certainly true to the period (1962 Baltimore).

It’s worth noting that the central love story isn’t man and woman, or same-sex, transgender, or any other combination of human-on-human love story.   It’s transcends species.   The amphibian may not be human, but he is certainly not a beast, either.  He’s fully aware, intelligent and sentient.   He even comes to understand American sign language (a bit too quickly in my opinion, but that’s a minor nitpick…).

And yes, the relationship becomes sexual, folks; it dares to go there, and the reward is a more adult fantasy love story than is typically seen in Disney movies such as “Beauty and the Beast” or “The Little Mermaid.”   The amphibian doesn’t suddenly or miraculously turn into Chris Hemsworth by the film’s end, either.  He remains exactly what he is, and is loved for it all the same…

At its core, “The Shape of Water” is a simple love story.   The mechanics of the story (arguably somewhat predictable) aren’t necessarily as important as the vivid core of characters and the surreal bubble of reality that this movie lovingly creates.

Just as del Toro’s “Pan’s Labyrinth” (2006) felt like a darker, fatalistic “Wizard of Oz”,  his “Shape of Water” is an inverse, quirkier, more adult answer to “The Little Mermaid” (or even 1984’s “Splash”).   Guillermo del Toro is a modern master of dark, adult fantasy.

I would also strongly warn adults NOT to take little children to this film; it features scenes of nudity, sexuality and even torture that make this a fantasy film for adults rather than little children.

But for those who are willing to enjoy a quirky fantasy with a somewhat unusual romance at its core?  Submerge yourself in “The Shape of Water.”