This past Sunday (Sept. 10th) marked the debut of Seth McFarlane’s new Fox sci-fi comedy series, “The Orville”; a gently (perhaps too gently) parodying Star Trek-style series that has all of the tropes and visual aesthetics of “Star Trek: The Next Generation” while attempting some  “Galaxy Quest”-style mockery of the space opera genre itself.

However, the premiere episode (“Old Wounds”) seemed to lack both Star Trek’s dynamism and Galaxy Quest’s full-tilt humor.  The result is a visually pleasant (if somewhat bland) “Star Trek-lite” with a few penis and wee-wee jokes thrown in.

I’d honestly prefer to welcome “The Orville” as a new, unofficial member of the Star Trek family than as a parody of it.   The story wasn’t half bad in of itself, and there were (many) times I wished McFarlane just avoided the comedy aspect altogether.   I’m sure that someone like comedy maestro Mel Brooks (even at 90 years old) could’ve taken this premise and ran the hell out of it.  But if feels like Seth McFarlane may be a bit too in love with Star Trek and all of its tropes to do the actual dirty work of subverting it for genuine humor (again: see “Galaxy Quest” for how to skewer with love).

I genuinely wish that “Orville” had the gumption to do with “Star Trek” what “Young Frankenstein” did with the Universal horror films of the 1930s/‘40s (or “Blazing Saddles” to the western genre).

Instead, he settles for Star Trek with a few toilet/sex jokes… 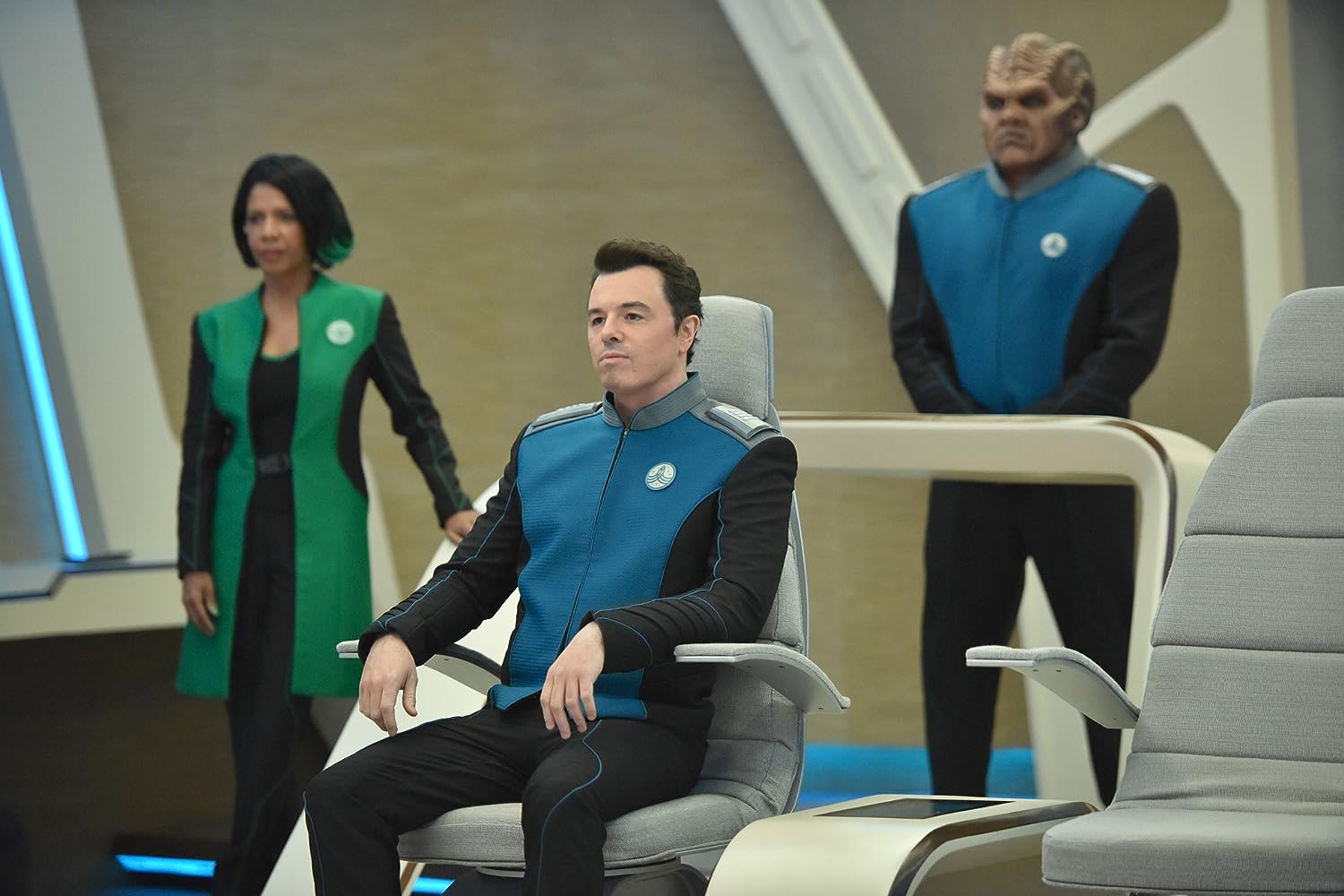 When McFarlane’s “Capt. Ed Mercer” sits in that captain’s chair of the Orville as the ship gracefully glides out of port,  I got the feeling that moment was less about the story and more about McFarlane’s own ‘captain’s chair’ wish reified; McFarlane really wants to captain a Star Trek series, not a joke of one.  McFarlane’s made no secret of his love of Star Trek; particularly “The Next Generation.”  Maybe that’s why the humor, at least in the premiere episode, throws so many softballs; McFarlane doesn’t want to bruise his target too much, and that’s potentially fatal for good, honest, funny satire.

Now, I get that comedy is what McFarlane does; but to be honest?  I’ve never been a big fan of  his comedy shows.  “Family Guy” and “American Dad” always felt (to me) like “Simpsons” clones on their best days.   Yet the producer Seth McFarlane also co-produced (along with Star Trek & Orville producer Brannon Braga) 2014’s wonderful new “COSMOS” series, hosted by Neil deGrasse Tyson, which was nothing short of excellent.

I’ve also seen McFarlane speak in person at 2012’s Planetfest convention in Pasadena (an event hosted by The Planetary Society), and his off-the-cuff remarks were hilarious (he wasn’t a scheduled guest; he ‘crashed the party’ but was met with tremendous enthusiasm).

But none of that personal charm that I’ve seen in Seth McFarlane himself seems to have filtered down into the nice-but-kinda-bland offering I saw Sunday night.

The story begins in a very utopian 25th century New York City, where “Planetary Union” (Starfleet by any other name) officer Ed Mercer comes home to find his wife in bed with a blue alien who, in a panic, spits blue mucous all over their apartment (much like a cephalopod’s ink).  Cut to a year later, and the emotionally damaged Mercer is called before an admiral (“Alias”/“Titanic” actor Victor Garber) who offers Mercer command of a ship to get him back on his feet.

The ship is a runt of the Planetary Union’s armada, but it’s a chance for Mercer to get back on the horse.   Mercer wrangles with the admiral to get his slightly sleazy helmsman buddy Lt. Malloy (Scott Grimes) aboard as well, then takes the offer.

Boarding the ship, he assembles the crew for a pre-launch pep talk (another Star Trek trope) and then does personal meets-and-greets with his senior staff; medical officer Finn (Deep Space Nine veteran Penny Johnson Jerald), a waifish-but-freakishly-strong alien security chief Alara Kitan (a somewhat stilted Halston Sage), a somewhat nondescript wisecracking navigator named LeMarr (J. Lee), a bigoted faceless android character that is almost entirely forgettable, and a Vulcan/Klingon-esque no-nonsense alien crew member named Bortus (Peter Macon, doing his best Michael Dorn impression), whom we learn only pees once a year (this is one of those jokes that might’ve been funny on paper, but falls kinda flat in execution).

And that is precisely what I mean about the show being undecided about whether it’s fish or foul.

The departing spaceport scene, as played, was very similar to the Galaxy Quest “leaving the starport’ moment (^); except that the GQ scene was actually funny.   This one wasn’t.

En route to its destination, the Orville finally gets her first officer, and in a subtle dig on Star Trek’s “she’s the only ship in the quadrant” cliche, that new first officer could only be Mercer’s ex-wife, Kelly Grayson (Adrienne Palicki).  Palicki plays the role with that slightly exaggerated, space opera aplomb that I’d wish the rest of the cast adopted; the rest of the cast (including McFarlane himself) plays it relatively straight or downright understated.   The comedy feels like it’s been strained through a colander onto the television screen.   Once again, I’m reminded of the amazing star power on display in “Galaxy Quest”;  Tim Allen, Sigourney Weaver, Tony Shalhoub and even a young Sam Rockwell all threw their comedic backs into it.   The cast of “Orville” are very tepid by comparison.   I’m not sure why they’re holding back either, as there is SO MUCH comedic material to mine in a Star Trek parody (the now-classic bouts of overacting, humorless silly-looking aliens, styrofoam rocks, cast members pretending to shake as the ship is hit, etc.). With her full crew, the Orville is diverted to a scientific outpost (shot at the Tillman Water Reclamation Plant; the famous Star Trek Next Generation location in Van Nuys).   Some of the interiors also look like the Marin County Civic Center (a location used in George Lucas’ “THX-1138” “Gattaca” and “Interstellar”).

The diversion was a false requisitions call made by “Dr. Aranov” (“Star Trek/Big Bang Theory/Austin Powers” veteran Brian George).  Aranov wants protection for his potentially dangerous new discovery; a ‘time ray’ that prematurely accelerates time in a confined space.   This was yet another scene that highlights the show’s ‘fish-or-fowl’ problem; a humorous bit about “killing a banana” with the time-ray is soon turned grisly by prematurely aging a researcher’s head in a somewhat more horrific moment.   Removing the banana joke would’ve punched up the effectiveness of the dead researcher.   Or conversely, removing the dead researcher would’ve punched up the humor of the “killing the banana” gag.   But “Orville” uses both; and each moment is a bit undermined by the presence of the other.

Long story short, the Romulan-Klingon-esque bad guys, the Krill, arrive to possess the weapon (which reminds me a bit too much of “Galaxy Quest”’s Omega 13 super-weapon, which also futzed with time).   The Krill force the Orville crew to hand over the weapon… but not before the crew places a redwood tree seed in it, which (of course) grows huge once the weapon is activated and rips the Krill ship apart from within when growing to full size.  This was probably my single favorite gag in the whole show, but it’s not something that they couldn’t (or wouldn’t) have done on Star Trek (which has its own share of humorous episodes… some of which were actually funnier than “Old Wounds”).

In a very Star Trek-ian coda, Mercer asks his ex-wife executive officer to stay, since she did such a great job (the scene echoes the “Encounter at Farpoint” pilot of Star Trek: TNG, when Picard and Crusher resolve their past histories and agree to work together, etc).   There’s hope for reconciliation between Mercer and Grayson as the ship gets underway.

So what exactly IS “The Orville”?   A parody or a love letter?   From the premiere, it’s very difficult to say exactly which.   I spent more time wondering how the producers avoided a conflict with CBS/Paramount’s legal team than I did laughing.

Despite this tepid beginning, I didn’t actively dislike “Orville” but I didn’t quite love it either.    It wasn’t strong enough to be a full-fledged space opera series in its own right, and it wasn’t quite funny enough to be a truly great parody either.

That said, this IS a first episode; a shakedown cruise.
And even it’s revered source material had a couple of rocky premiere episodes under its belt.   Star Trek: The Next Generation had “Encounter at Farpoint,” and even the original Star Trek series kicked off with the rather lackluster, moster-on-the-loose story, “The Man Trap.”

So, despite my ambiguous feelings about Seth McFarlane’s new space opus, I’m not quite ready to give up on it juuust yet either.   It’s a great-looking series (the Star Trek: TNG look-and-feel are nearly perfect) and the space FX aren’t bad either, but the characters don’t register very strongly (yet?) and the low-hanging humor doesn’t quite hit the mark.

Personally I wish that the show’s writers/producers could make the humor a bit more sophisticated, or just chuck the dumb jokes entirely and play it as a straight space opera series.

Either direction could be an improvement at this point…