^  Okay, now that we’ve got that out of the way, this is my take on it, for whatever it’s worth…

In short, the trailer tells us that this is (like ENTERPRISE) another Star Trek prequel; this one takes place only 10 years before the events of the original series.   We see Captain Georgiou (Michelle Yeoh, “Crouching Tiger, Hidden Dragon”) trekking across an alien desert with her first officer of seven years, Commander Michael (not Michelle) Burnham, played by Sonequa Martin-Green (“The Walking Dead”).   The captain tells her exec that it’s time she had her own command, whips out a clunky old-style Starfleet communicator and signals the starship Discovery that they’re ready to beam up.

From there, spoilers for the new series hit us at warp speed…

We see redesigned Klingons (looking closer to how they appeared in “Star Trek Into Darkness” than the original series, the movies, or the spinoff shows), as well as escalating tensions between these Klingons and the Federation.

We see Spock’s father Sarek (James Frain, taking over from the late Mark Lenard and ST09’s Ben Cross) both in person and as a hologram; apparently he mentored the young Michael Burnham when she was a child (which raises a question; was Burnham raised by Vulcans?).

We see what looks like a spacesuited standoff between Burnham and Klingons.

We see the interiors of the USS Discovery, as well as the exterior of the ship traveling at warp. 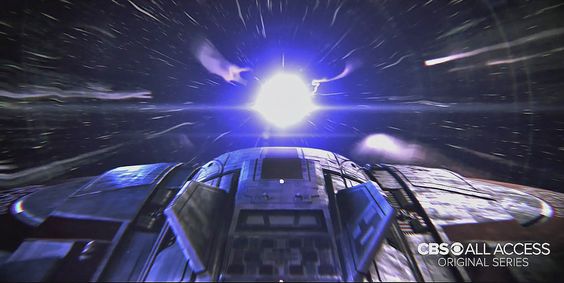 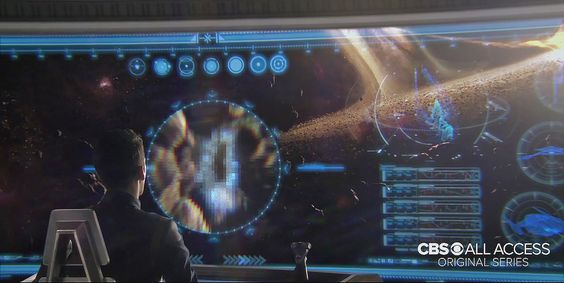 ^ We see holographic and 3 dimensional displays, more in keeping with the JJ Abrams’ Star Trek universe.

We see new aliens as well…

And we see an alien officer, Lt. Saru (the “Hellboy” movies, “Buffy: The Vampire Slayer” “Pan’s Labyrinth” and “Hocus Pocus”), discussing his species’ unique ability to “sense the coming of death,” and that he senses it coming now.

On a personal note: my wife and I met Doug Jones at Comic Con San Diego back in 2012. He is a gracious man and, I learned, a talented mime.  He usually tackles roles under heavy makeup (“Hellboy” “Pan’s Labyrinth”), so he is not easily recognizable, but his unique ability to project emotion through layers of latex or silicon is truly remarkable.   I remember Jones discussing his book, which examined his career as a mime artist (“Mime Very Own Book”).  He also talked about learning near-flawless phonetic Spanish for his role in “Pan’s Labyrinth.”  Meeting Jones was a true pleasure, and I’m glad we had the opportunity.

On another personal note, my wife and I saw Sonequa Martin-Green in person during a live taping of the now (sadly) defunct SyFy Channel series, “The Wil Wheaton Project” back in 2014.  Here’s the finished video:

“A Moment of Patriotism, with Sonequa Martin-Green” (from “The Wil Wheaton Project”)/YouTube.com

Martin-Green surprised me with her solid comedic timing, which was something I hadn’t expected after seeing her as the downtrodden “Sasha” in my then-favorite series “The Walking Dead” (“The Walking Dead” and I broke up last year… it was messy; don’t wanna talk about it).   I think Martin-Green will be a valuable asset to Star Trek.

And did I mention that Michelle Yeoh (“Captain Georgiou”) is also an amazing actress and physical performer?  I still remember my wife and I seeing “Crouching Tiger, Hidden Dragon” at the movies back in 2000.   Both her acting and (considerable) martial arts skills were very impressive.

^ Yeoh’s rooftop battle/chase sequence in the film caused the entire audience to erupt into spontaneous applause for what seemed like a full minute.   This was something I’d never seen in a movie audience before.   Random, spontaneous, lengthy applause (!).  So when I first heard of Yeoh’s casting in “Star Trek: Discovery,”  I was definitely onboard with it. 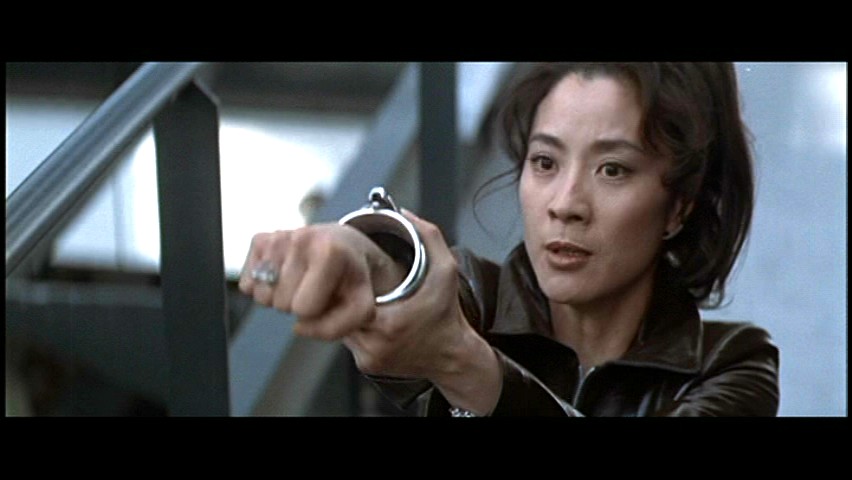 I also enjoyed her performance in “Tomorrow Never Dies” (1997); a somewhat routine Bond outing, enlivened by her appearance.

So… what do I take away from the new trailer?

So… my overall take on the trailer for “Star Trek: Discovery”?  I’m cautiously optimistic.

I don’t mind them sharpening the technology and overall look of the Star Trek universe, though I think it might’ve eased into Star Trek continuity a bit more smoothly if they’d set this new, sleeker series after the events of “Star Trek Voyager.”   Maybe they could’ve set it in Star Trek’s 25th or 26th century, or maybe jump ahead another few centuries to the 31st (?).    This would truly be ‘boldly going where no one has gone before.’ 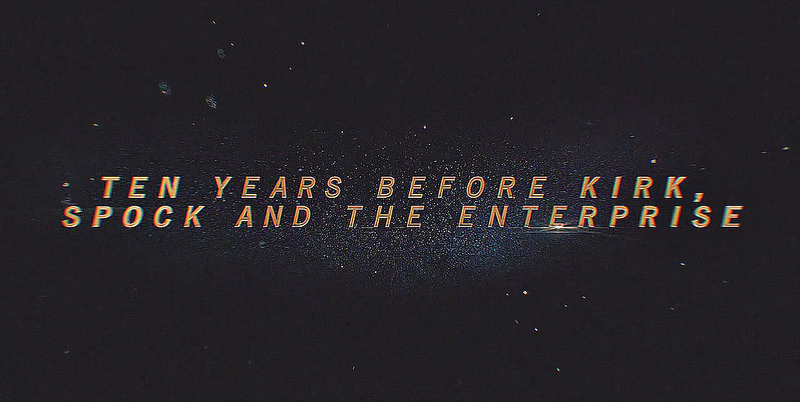 Setting it 10 years before the original series only serves to limit the window of what can happen within the show.   This can really hurt the new series if they’re not careful.

^ The previous prequel series “Enterprise” (2001-5) used the excuse of a ‘temporal cold war’ to help massage  the continuity issues a little bit.

If you saw something that didn’t fit with prior continuity?  Well, it was probably the work of those darn rogue time travelers!  Like the old Simpsons’ line delivered by a cartoon Lucy Lawless at a “Xena” convention, “A wizard did it.”

^ JJ Abrams’ 2009 reboot movie series solved the continuity issues by setting that film’s 23rd century in a newly formed alternate reality apart from the events we saw in the original series.   This had the advantage of being able to use the original series characters (all smartly recast) but with the freedom to tell new stories, with new calamities and perils (i.e. the destruction of Vulcan, and the death of Spock’s mother).   In my opinion, it was a smart solution to nearly 50 years of cumbersome continuity that often contradicted itself, and threatened to strangle the new movie series in its crib.  Creating a separate, alternate reality (sanctioned by no less than the ‘blessing’ of Leonard Nimoy’s “Spock Prime”) gave the franchise the gift of a fresh start. 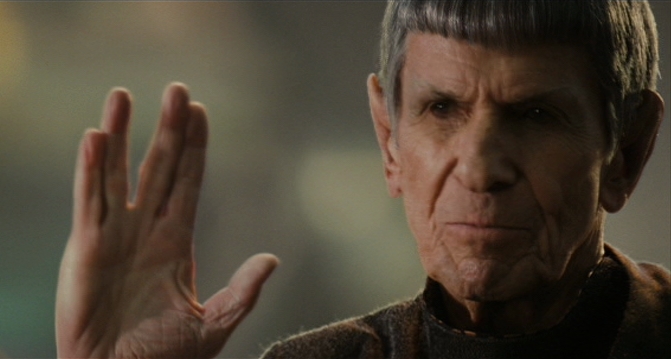 But the new series, by all accounts, is supposed to be set in the “prime” (original series) timeline; the same timeline that extends through all of the subsequent TV series.   This means that for some in ST fandom, it has to align juuuuust right with the original series.   And that is simply impossible.

The original series was born in a time before man landed on the moon, before the internet, before wi-fi, before laptops, before smartphones, before hybrid cars, before high definition TV, even before Trader Joe’s sugar-free dark chocolate bars.  A barbaric time, the age of my birth (hehe)…

The once ‘futuristic’ technology of the original series looks more than a bit quaint now; even if it did serve to inspire many of the technological leaps that rendered it obsolete.   The miniskirts and beehive hairdos of the ’60s show are also very “Mad Men”-esque by today’s standards, and would be laughably retro today.   Styles that were once cutting edge quickly become yesterday’s curiosities and thrift shop wares.   The original Star Trek was prescient in many ways, and still very watchable today, but one has to make allowances.   Little kids might wonder why Captain Kirk uses a communicator that is seemingly less advanced than their mom’s smartphone, or a clunky ‘tricorder’ that today would probably just be an app.   Forecasting the future is risky business…

More important than the tech and the clothes are the stories.  Will this new incarnation of Star Trek live up to the quality of storytelling that served to define the best of the series and movies?  That’s the big question.

In the 1960s through the 1980s, the ‘messages’ of Star Trek were always cleverly hidden.   And all of the issues examined within the allegories of the original series are still, sadly, very much with us today.   Sexism sees women continuing to make not-quite as much as their male counterparts within the same professions.   Racism is ongoing, despite a black US president who served for two terms, and prominent politicians/leaders of different ethnicities and religions.  Hate crimes are on the rise, as is a new and dangerous wave of populism throughout the world.  Extremism, both religious and political, have similarly escalated.   While the LGBT communities enjoy unprecedented new freedoms (including the hard-won right to marry), they are still very much discriminated against and actively hated by many.   So yes, we’ve come a long way…. but we have a LONG way to go yet.   Star Trek has always spoke to us in our darkest days by showing a bit of light at the end of the long tunnel.

Star Trek’s strength was in its ability to comment on social ailments under the guise of Jonathan Swift-ian allegory.   And there is still a lot to say, but today’s television doesn’t skirt away from political commentary, nor does it disguise it in allegory to get by the censors.  If anything, today’s television thrives on disparity and conflict.    Television today doesn’t so much comment on social ills as it does exploit them.  But that doesn’t mean Star Trek is irrelevant or quaintly obsolete.   If anything, it presents a new challenge!  In fact, I’m very curious to see how this new series will speak to the ongoing and seemingly endless strife of the human race as it is today; and what new insights it might offer (?).  How will a new Star Trek speak to an increasingly cynical age without being preachy?  How will a new Star Trek inform as well as entertain? 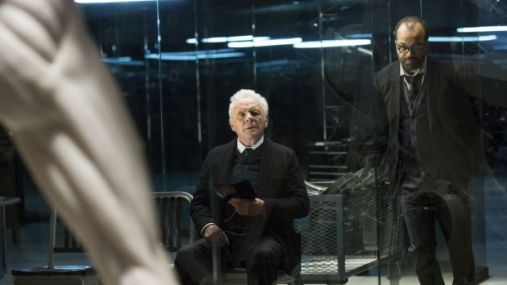 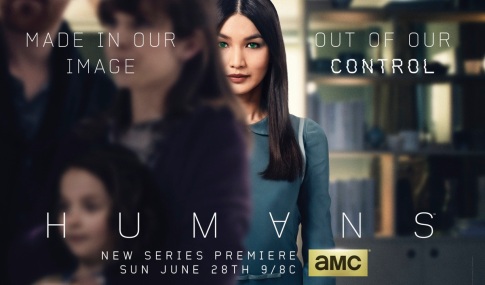 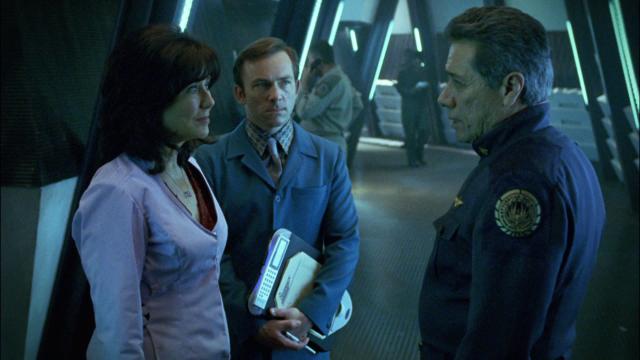 There are other recent examples of science fiction allegory that manages to stay relevant by tackling controversy head on; Ron Moore’s brilliant reimagining of “Battlestar Galactica” (2003-9) comes to mind.   As does “Humans” (2015-present) and “Westworld” (2016-present).   But those series tend more towards dystopian and darker avenues for mankind.  One of Star Trek’s best features is it’s inherent optimism in the face of adversity.    The original series was born in the chaos of the Civil Rights movement, endless protests over the Vietnam war and (conversely) the Space Race.   It acted as a bright beacon through the thick, murky peril.  Star Trek simply said, “We can make it through this…”   And it managed to entertain us, too.   A spoonful of sugar helped the medicine go down…

If the state of the world today tells us anything, it’s that we could all use a vision of a brighter future to help inspire us.   Even if that vision is only a signpost rather than a detailed Google map.