In addition to science fiction, I’m also a lifelong fan of actual space science as well.  Certainly “Star Wars” and “Star Trek” whetted my youthful appetite for space opera and space fantasy, but it was seeing a relatively obscure 1964 movie on late-night television when I was a kid that helped in developing a future fascination with the planet Mars.   That movie was a long forgotten gem called “Robinson Crusoe on Mars” (RCoM); which was later released on Criterion DVD and blu ray, and was finally given the respect that eluded it for too long.

Snicker-worthy title aside, RCoM is a terrific movie; a Project Mercury-era updating of the Daniel DeFoe classic novel.   In the movie, US Navy commander/astronaut Christopher “Kit” Draper (played with much gusto by the late Paul Mantee) is part of the two-man “Mars Gravity Probe One”; an orbital mission that is forced to land on the red planet to avoid a wayward meteor.   Draper’s captain (played by a pre-Batman Adam West) is killed in the attempt, but non-human crew member “Mona” (a woolly monkey) survives.

The first 30-40 minutes of RCoM are essentially a survival epic on a par with others like “Cast Away” (2000) or “Gravity” (2013).  And there is an admirable, pre-Mariner 4 attempt at scientific accuracy as well (with references to Mars’ thin atmosphere, polar caps, ancient lava tubes, etc).

Later the movie lays on the fiction a bit thick when Draper teams up with a runaway extraterrestrial humanoid slave whom he names “Friday” (played by a Tarzan-esque Vic Lundin); the name being a nod to the original Daniel DeFoe novel.   Draper soon teaches Friday English as he learns a few words in Friday’s language.   Together, the two of them forge a friendship as they elude Friday’s overlords, who fly menacingly (and erratically) overhead in boomerang-shaped spaceships left over from director Byron Haskin’s classic “War of the Worlds” (1953).   Some of this part of the story is a bit corny (see: 1985’s near-remake “Enemy Mine”) and even preachy, especially when Draper recites the 23rd Psalm as the two of them trek toward the polar cap together.   But what is never compromised is the sincerity of the movie.  I watched it again, decades later, and I was as engrossed by it as I was at age 10; largely because it is played straight and never veers into camp, despite the title and Friday’s somewhat silly slave costume.

Granted, the science in RCoM is pretty off (wearing t-shirts on Mars’ surface, for example), but the movie was made before any spacecraft from Earth ever flew by (let alone landed on) the planet. Any Mars movie made today benefits from over 50 years of Mars’ exploration by robotic emissaries.

This movie, as well as the first Viking images from the surface of Mars (thanking my late father’s National Geographic subscription), played a large part in sparking my lifelong obsession with the planet Mars.   Today that love manifests itself in my 20 plus-year membership in The Planetary Society (Planetary Society at planetary.org).   Those Viking photos, as well as the movie RCoM, made the planet Mars a real place; it was no longer a dreamlike fantasy arena.   Mars truly existed for me now.   It was tangible.

Much later in 2004, my wife and I were at a science fiction convention in Pasadena and we got to meet Paul Mantee.   He was a delightful man.  He talked about working on RCoM; including a humorous anecdote about his woolly monkey costar’s incontinence, and a more somber story about learning of Kennedy’s assassination while on location in remote Death Valley.   I told him how the movie was a significant part of what later inspired me to join The Planetary Society.  He seemed quite touched by that.   Mantee also told me how he’d hoped the movie would do more for his movie career, but sadly didn’t.   Mantee did have a long career in television and bit movie parts (including playing a reporter in Ron Howard’s “Apollo 13” [1995]).   Such a shame his career didn’t skyrocket after RCoM since Mantee really gives the movie his all and carries it singlehandedly for a significant chunk of it.   He gave me two autographs that day, and I cherish them both.

I later bought RCoM on Criterion edition DVD/blu ray, and listened to Mantee’s commentary track.   It was very insightful, and I highly recommend that every RCoM fan buy the disc and give it a listen.   Sadly, Mantee passed away in 2013 at age 82.

Cut to June of 2015, and I’d just read a book by newbie author Andy Weir.   The book was called “The Martian” and was amazing.  It was first published online on a blog (really), later as an ebook sold on Amazon.com, and finally got a print publishing (which is how I got my copy; I’m old-fashioned that way).   As Weir says, the process went backwards; going from ebook  to print.

Anyway, I could not physically put this book down for about two days.   And I read the last 40 pages extremely slowly because I literally didn’t want it to end.   This book was the fictional Mars book I’d dreamt of my entire life; one I would’ve written myself if only I had the talent, imagination and determination of Weir (just a few shortcomings on my part…).   And the book was coming to the big screen that October, so I wouldn’t have to wait long to see it visualized onscreen.

“The Martian” movie is a rare, near-seamless book-to-screen adaption.  It was also directed by the brilliant Sir Ridley Scott (who also directed two other favorites of mine; 1979’s “ALIEN” and 1982’s “Blade Runner”), and was largely shot on location in Wadi, Jordan and on indoor soundstages in eastern Europe.

As a cinematic experience, “The Martian” is the dream of RCoM realized.  It also jettisons many of RCoM’s fiction as well (no Friday, no slaver spaceships, etc).  “The Martian” movie is a fully-loaded Mars survival epic with very few compromises.

“The Martian” (book & movie) does take some minor liberties with actual Mars science. For example, a Martian windstorm in that planet’s extremely thin atmosphere would not threaten to topple a heavy secured landing craft, even in the worst of its windstorms.  Mars’ surface pressure is about 1/100th of Earth’s at sea level.  The fiercest Martian windstorm would be little more than a gentle breeze on Earth.  The greatest dangers would be a lack of visibility, or reduced energy to solar arrays for electrical power but not much else.

Weir himself has admitted to this purposeful fudging because he couldn’t think of another threat scenario that would could leave a single astronaut stranded alive on Mars.  It was a necessary means to an end.  Inaccurate perhaps, but what the hell… it worked.

Despite a few other scientific liberties taken here and there, “The Martian” is probably the closest we poor landlubber humans will come to experiencing Mars firsthand; short of Caltech-based remote rover drivers or the astronauts who will first set foot on the planet themselves (someday?).

“The Martian”‘s protagonist, the humorous, irreverent, wonderfully foul-mouthed astronaut Mark Watney (Matt Damon OWNS the film) is nearly 180 degrees from the sterner, less mirthful, military-minded Alan Shepard-lookalike Kit Draper of 50 years ago.   What both men share is an utter refusal to die.   To that end, they both find ways to eke out an existence on a planet that should not support life.   Draper finds oxygen-producing rocks, edible martian plant life and even a small pool of stable liquid water; all of which are pretty much impossible on Mars as we understand it today (though water is present; albeit in ice form beneath the surface).

By contrast, Watney builds a potato-making greenhouse within his pressurized habitat module, which he farms using Mars’ soil and his own feces (gross, but plausible).  His poop-taters are the stuff of life he needs to survive for many months past his would-be expiration date until his departed colleagues abroad the earthbound mothership “Hermes” can defy their return-home orders and rescue him.    Watney doesn’t get his oxygen from miraculous rocks either; he uses atmospheric reclaimers recycled from his ship to make oxygen from the planet’s thin CO2 native atmosphere.  Again, plausible and doable; even with today’s tech.

In RCoM, Draper attempted to entertain himself by playing boring old survival tapes on a clunky looking videotape machine; “The Martian”‘s Watney is forced to go through his commander’s digital collection of cheesy disco music and ’70s TV shows that were left behind in the habitat module.

And in lieu of an alien Friday or a cute woolly monkey for companionship, Watney uses repurposed technology from the long defunct 1997 Pathfinder landing craft (which was the base for the Sojourner rover) to communicate with Houston and his shipmates (with crude images at first, and later text/email packets routed through Watney’s own rover). There are also at least a dozen or so satellites in orbit over Watney’s Mars, which keep continual eyes-in-the-sky on his trek across the surface to the site of a waiting return vehicle (left there for the next mission).    Watney is physically alone, but in the age of GPS tracking and texting he isn’t without human contact for very long.    By contrast, Draper (save for Mona and Friday) only makes contact with his countrymen at the very end of RCoM.

In 1964, the producers of RCoM couldn’t have imagined that Draper would be able to use comm tech from a 40 year old abandoned robotic vehicle left behind on Mars.  Or that a battery of satellites in orbit could keep tabs on his actions.   Weir’s “The Martian” is able to see further than the now-quaint RCoM because it stands on the shoulders of those who built and launched all of the real-life spacecraft that have slowly began to chart the Mars landscape since the 1970s.  The story is the direct benefactor of all of that accumulated knowledge and experience gained from generations of scientists and engineers who’ve ‘scienced the shit’ out of those real-life missions.  Andy Weir even half-jokingly said at a San Diego Comic Con 2015 panel that he researched much of his book via Google (!).

As much as I love “The Martian,” I look forward to the day (if I live long enough) when it too, is rendered obsolete by real-life men and women who someday put bootprints on the surface of that beckoning red planet. Getting to Mars isn’t easy; a little under half of the missions there have actually succeeded. A real-life manned Mars missions will face many obstacles.

For now, until the international will, money and capability match that ambition, fictional manned Mars missions will have to suffice. And given some less-than-successful Mars movies (including 2000’s double-whammy of “Red Planet” and “Mission to Mars”), “The Martian” shines like a beacon of superlative quality in this subgenre. 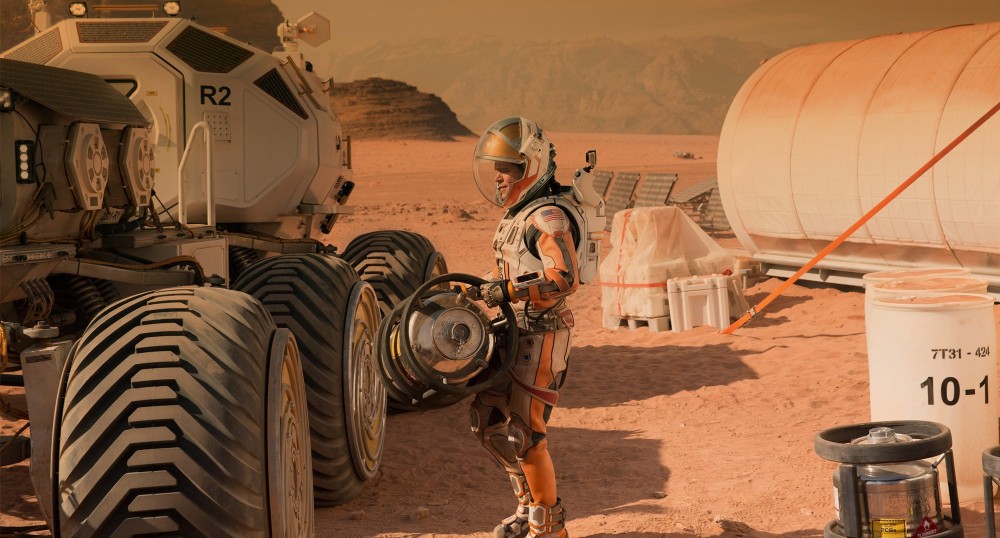 And even if “The Martian” is surpassed someday (and I hope it is), I’m sure it will be as admired and fondly remembered by future generations as “Robinson Crusoe on Mars” is for me today.    Both movies are honest and earnest attempts at realizing that age old dream of human beings on Mars.