Today’s entry is about two of my favorite scifi series; Doctor Who and Star Trek, and how I’ve recently had the delight of seeing rare treasures from each.  These lost pieces of the two franchises were thought to be long gone, but thanks to dedicated efforts from professionals, fans and BBC/CBS studios, what was once lost is here again to re-stoke old geek flames. Perhaps even to win a few new audience members (?).

The DW franchise saw the restoration of the long-missing classic episodes from 1966’s “The Power of the Daleks” story, which was also the first full story to feature Patrick Troughton’s Doctor (below, with costar Anneke Wills as “Polly”), following his ‘regeneration’ from William Hartnell, the previous and first actor to play The Doctor. 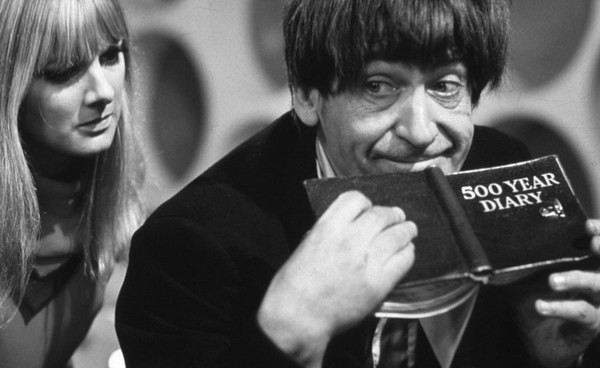 When Doctor Who fans talks about a ‘lost’ classic episode?  They’re not screwing around; for the missing episodes are usually very very LOST.   As in gone from this dimension.

At the time of the early to mid-1960s, the BBC was not in the habit of keeping old tapes of old shows lying about, and many were simply recorded over completely to make room (this would be both shocking and unthinkable today).   Even the most cerebrally-challenged episodes of “Charles In Charge” or “Who’s the Boss” still survive to this day (don’t ask me why), but whole stories of this beloved British series were (and many still are) lost to time and mismanagement of old video tapes.

Through perseverance, fan-networking and good old fashioned elbow grease, researchers and archivists have been able to restore/resurrect some if not most of the lost episodes with the use of surviving audio tracks, private collectors’ tapes, still frames or kinescopes (films made off of TV monitors from live broadcasts).

But beginning with the 2006 DVD release of the 1968 Patrick Troughton DW story, “Invasion” (the classic ‘Cybermen invasion of London’ story), the BBC began animating missing segments to match the surviving/found audio tracks. 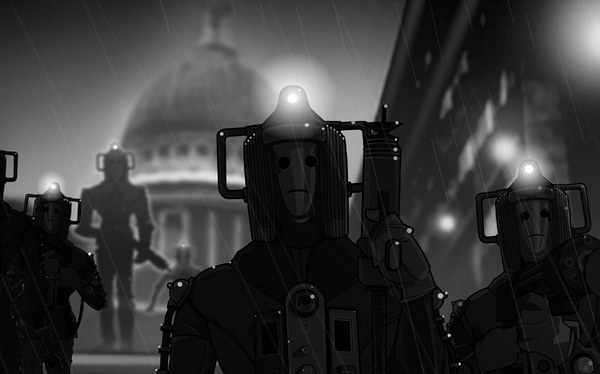 ^
The Cybermen descend on St. Paul’s cathedral in London in a hauntingly eerie and beautiful animated segment of “The Invasion.”

I must say, I much prefer the animated approach rather than listening to audio tracks as a single still frame remains frozen onscreen for seconds or even minutes at a time.   The animation isn’t quite Disney, but it more than gets the job done.  And the animators do beautiful work capturing the nuances of expression in closeups.   I also love some of the nearly photo-realistic backgrounds, too.  When I first saw “Invasion” a few years ago, I was almost disappointed when the live-action segments of the stories reappeared, as they looked very grainy and jarringly video-tapish.   I realized that the animated segments had me spoiled.

Now back to the current ‘lost treasure’ of this franchise; the release of 1966’s “Power of the Daleks.”  I’ve preordered my US copy of the DVD (which doesn’t come here till late January… d’oh!) but it’s already been released in the UK last month, and for broadcast here in the US on BBC-America.

I’ve finally had a chance to watch the first two animated segments.  Typically older DW stories tended to be divided up into 4 or 8 half hour segments; some from the mid-to-late ’80s were done in 2 or 3.   The first two segments of “Power of the Daleks” were typically excellent; the audio is clear (for a 50 year old broadcast) and the animation is top notch.  I especially loved the cobwebbing and the dust shadows of a missing Dalek within the seemingly defunct Dalek capsule.

It was also gratifying to finally see this missing but vital piece of this long-running series.   Beyond rumor, secondhand accounts and write-ups, I’d never actually seen any whole part of it.   This was a look back in time, but through a lens of modern animation.

I also like how the animated segments are made in the EXACT same style as the live-action elements.   There’s no attempts to “George Lucas-it up”; no additional armies of thousands in the backgrounds, no flying, colorful farting creatures cluttering up the frames (yes, I’m SO looking at you, Star Wars special editions…).   The animated segments are just hand-drawn frames of the show as it should’ve appeared in that era; almost like a court reporter jotted it all down in broad strokes during the broadcast so that the essential story survived.    I understand there is also a color version of this story made, but being something of a purist I prefer the black and white version.  The original live-action episodes weren’t made in color, so I have no desire to see the restored animated versions in color either.  The black-and-white also adds to the creepy noir feeling of the episodes.

Well worth seeing it either on BBC, BBC-America, import UK DVD or just wait for the US January DVD release.   A must for classic Doctor Who fans.  See it any way you can.

Now onto the other lost bit of geeky treasure discovered this week; from a series I thought I literally knew EVERYTHING there was to know about… classic Star Trek.   Dec. 13th marked the release of “The Roddenberry Vault” blu ray collection.

To the cynical among us, this set might seem like a repackaging of material from the 2007 Star Trek The Original Series DVD/blu-ray sets.  And to an extent, they’re partially right.   The set has 12 remastered episodes of TOS from the 2007 editions (3 of which have all-new commentary tracks), but… and this is important… it’s the NEW BONUS MATERIAL that makes this one worth the price of purchase (around $40-$50 on Amazon or Best Buy, where I got mine).   The bonus material amounts to about three hours combined running time (from all 3 discs), but it also contains isolated little deleted bits (yes, DELETED SCENES from classic Star Trek!) and bloopers, as well as behind-the-scenes looks at the creation of the special effects, with unused pieces of FX work from the 11 ft. USS Enterprise filming miniature, which currently rests in the Smithsonian, as well as the Botany Bay; the ‘sleeper ship’ of big bad Khan from the episode “Space Seed” (the episode which later begat the 1982 feature film/sequel,”The Wrath of Khan”).

What makes the set truly special for me are the deleted scenes.    There is a delightful, if somewhat politically incorrect, scene from 1966’s “The Corbomite Maneuver” where Asian helmsman Mr. Sulu jokes with Captain Kirk about how he loved mimicking the “droopy eyelids”-depiction of Asian bad guys from old Charlie Chan movies when he was a kid.   George Takei is utterly charming in this scene, too.   I can see why it was cut (it’s just a character moment), but it’s a shame, since it really humanized Sulu in a way that only a handful of episodes ever would throughout the series’ run.    Granted, hearing Kirk jokingly refer to Sulu as an “Oriental” in the scene does make one cringe a bit today.   But nevertheless I appreciate the attempt to show how 23rd century human beings were post-prejudice, and could actually look upon such ancient stereotypes the same way a modern writer looks upon a manual typewriter from the 1950s… a pain in the ass perhaps, but lovingly quaint today.

There is also a great bit from Dr. Leonard “Bones” McCoy (played by the late DeForest Kelley) in the aforementioned “Space Seed” where he stands up to Khan (Ricardo Montalban) in the ship’s briefing room after Khan ruthlessly takes over the ship.  McCoy is knocked unconscious for his troubles, but it’s a great moment of courage as he yells at the tyrant, “I never thought I’d say this to a patient, but you OWE ME! I saved your life!”   What a great moment that was!

And to think I never even knew it existed until this week.

There are other missing bits like that throughout the set, interspersed between talking head interview segments, but on the third disc there are 21 minutes of uninterrupted deleted scene BLISS.   One of the nicer moments is Uhura (the incredibly lovely Nichelle Nichols in her prime) singing the full version of “Beyond Antares” (from the episode, “Conscience of the King”).  There is no cutting away; just one tight camera angle on her for the whole song.   It’s great stuff!

And speaking of music (as the ill-tempered “Nomad” space probe would say, “Think about music…”) each of the 12 episodes  on the disc have isolated musical soundtracks; which is great news if you’re as big a fan of TOS’ music as I am.  There is still a smoking hole in my wallet from when I bought the TOS complete box soundtrack earlier this year.

Speaking of soundtracks, I’ve only listened to one of the 3 new 50th anniversary commentary tracks recorded for the episodes (“This Side of Paradise”; with original episode writer Dorothy Fontana and Gabrielle Stanton).  It was very informative and made me chuckle a few times,  too.  Dorothy Fontana is such a terrific and snappy writer.  Her episodes (“Tomorrow Is Yesterday” “Journey to Babel” and MANY others) are usually among the show’s best.

A warning to consumers; the film clips of the deleted material isn’t pristine like the restored episodes themselves; they’re grainy, the color is faded and the sound is sometimes muffled or even missing.   They were cut from crude work prints of the episodes, not the final versions.   But I say take ’em as they are, because short of a time machine or a mind-meld with a cast member, this is as close as any of us are to truly being behind-the-scenes of the original series.   And for me?  That’s just fine…

Granted, this is the very definition of a first-world problem, but a minor nit nevertheless if one was hoping to listen to the commentaries AND see the new CGI FX made for the 2007 versions of the episodes.   A nit, but not a tragedy.

Speaking of new CGI FX…normally I’m not okay with augmenting old movies or TV shows with jarringly perfect modern CGI (yes, once again I’m looking at YOU, Star Wars special editions…).   But the 2007 Star Trek TOS restorations are an exception to that rule; they are meticulously done, and they never change or alter the original stories in ANY way (no ‘Greedo-shoots-first’ type shenanigans).   The new FX enhance the space/planet shots, fix minor mistakes, omissions (i.e., a missing phaser beam) or misplaced stock shots that were used as quick-and-dirty placeholders back during the episodes’ original production.   Some of the new FX are so seamless you barely notice them; and I imagine a first-time TOS viewer probably wouldn’t notice them at all.

If you already own the series on DVD?  You might want to save a couple of $20s and get this set anyway.   It feels like the bonus content we should’ve got when the series was rereleased for the 2007 restoration sets.   This Vault set was a late but unexpectedly appreciated anniversary gift for Star Trek’s 50th anniversary.

It’s nice that after 50 years you can still see a new side to old classics you thought you knew so well.   “Power of the Daleks” and “The Roddenberry Vault” are the very definition of pleasant surprises.