Following a completely lackluster episode (the instantly forgettable “Tsungara Conundrum”, which felt like a patchwork of Doctor Who cliches), the series rebounds strongly with “Demons of the Punjab”; an episode that is easily on a par with “Rosa” and may even find its future status among the series’ all-time best episodes.  Written by Vinay Patel (take a bow) and directed by Jamie Childs, this is one of the strongest episodes I’ve seen since “Doctor Who” returned in 2005.  Under new showrunner Chris Chibnall (better known for legal procedurals, such as “Law & Order UK” and “Broadchurch”), the new season is at its best when it sticks to more terra firma-based subject matter.

Like 2005’s “Father’s Day”, we see the TARDIS going back to a point in the personal history of a member of “Team TARDIS”, in this case, the lovable millennial Yasmin “Yaz” Khan (Mandip Gill).

Opening at the present-day birthday party for Yaz’ grandmother ‘Nani’ Umbreen (Leena Dhingra), Yaz is gifted with an enigmatic object from her Nani’s past… an old, broken wristwatch with a cracked face.  The story behind the gift (and its appearance) are a closely guarded secret, which Nani Umbreen refuses to divulge.

A curious Yaz persuades a reluctant Doctor (Jodie Whitaker) to take the she and the rest of “Team TARDIS,” Ryan (Tosin Cole) and Graham (Bradley Walsh), back to rural India of 1947… the time of India’s partitioning into India and Pakistan.  Yaz meets the much younger Umbreen (Amita Suman), a Muslim, and her young Hindu fiance Prem (Shane Zaza), who is not the man destined to become Yaz’ grandfather.

Has Yaz’ personal history gone awry, or has the older Umbreen kept a much greater secret from her family?

The alien angle (this is still a Doctor Who story, after all), comes in the form of a fearsome looking species called the “Thijarians” are a former assassin race who have rededicated themselves (in the wake of their homeworld’s destruction) to act as mourners for those who die alone and unattended.   Their perceived malevolence turns out to be deceptive… despite their appearance, oppressively loud voices, and aggressive acts of teleportation.  This is an unusual twist to the typically vicious-looking aliens we’ve seen in Doctor Who past (most recently in “The Woman Who Fell To Earth”).  It’s a bit like finding out the shark in “JAWS” is a vegan.

Further complications arises as the increasing threat of violence from India’s turbulent partitioning encroaches on Umbreen & Prem’s rural home.  Fearing threats from the alien ‘demons’ (the misunderstood Thijarans) as well as violent mobs coming from the cities, Prem and Umbreen decide to get married immediately, with the Doctor stepping in to act as officiator in a ceremony that elegantly blends both Hindu and Muslim practices. As Prem offers his new bride his wristwatch as a gift, it accidentally falls to the ground and breaks; unintentionally freezing that moment of time forever.

Umbreen and Prem are essentially Romeo and Juliet; defying both culture and tradition to unify in the face of a nation tearing itself in two; a division that resonates all too strongly in the current age of Brexit (or Trumpism, here across the pond).   And like the young Shakespearean lovers, there is a tragic ending in store for Prem and Umbreen as well.  Yaz’ family history rights itself, but at the cost of a martyred Prem, who is killed when his fervently nationalist brother Manish (Hazma Jeetooa) and his radicalized militia turn against him.   The Doctor and Yaz both understood (however reluctantly) that the likable, idealistic Prem had to die in order to keep Yaz’ present-day family intact, giving the story a heavy portent, much like “Rosa.”

Team TARDIS returns to the present, and Yaz has a much greater appreciation of what her Nani went through in those days.   She also comes to understand that, despite the tragedy, her Nani did find happiness.  Umbreen eventually married Yaz’ grandfather, and it was a loving marriage.  Nani Umbreen is about to tell Yaz the story behind the wristwatch when Yaz tells her it’s okay; she can tell all when she’s truly ready.

Favorite moments (of many).

An elegant statement of cultural and religious unity done elegantly and without a heavy hand.  The Doctor’s officiating added just the right dash of appropriate humor; it was sweet, without being too awkward or jokey. 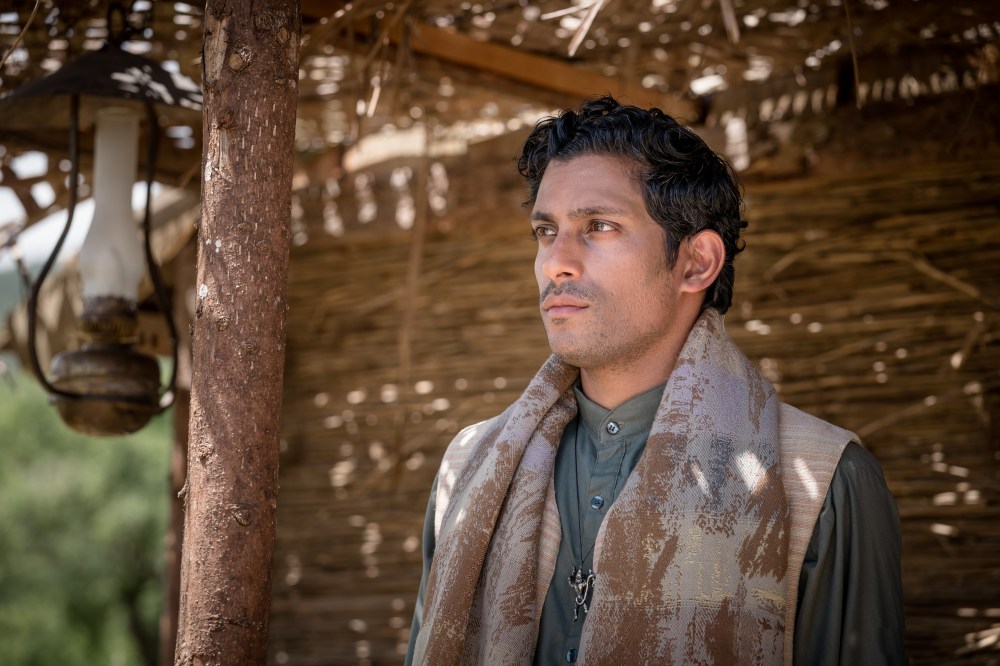 A scene that speaks not only of that time, but very much to this one as well.   This is the age of Brexit, Trumpism, and heightened nationalism all over the world.  It is leaving many families divided, not to mention many “ordinary people” who are being radicalized into violence and hatred against anyone ‘other.’  As Prem notes, those are the real ‘demons’… ordinary people who suddenly lose their minds to nationalist fervor.   Prem’s murder makes a powerful statement against past-and-present nationalist fervor, as well as further cultural/political/religious division.

*  Yaz and her Nani in the present.

Full circle, nicely bookended storytelling.   If I have any complaint, it’s that the warmth and bonding between these two outshines the other members of the Khan family.

A genuinely unexpected twist with the heavily-mandibled and fearsome looking “demons” turning out to be benign mourners of the unattended dead. Less predator, more priestly.  Have to admit; I didn’t see that twist coming, and it was most welcome.

Chris Chibnall’s take on the series has been uneven to date.  However, when he lets his writers (and actors) get personal with the characters, the series hits its stride. “Demons…” is sprinkled with enough characteristic Who humor and sci-fi bits to keep it within the realm of the show, but like the best episodes of the series, it is transcendent of both the genre and format.

“Demons of the Punjab” isn’t just solid Doctor Who, it is great drama as well.  Writer Vinay Patel deserves one more round of applause for this sensitive, inclusive, timely and poignant hour of television.