Today was Day One. 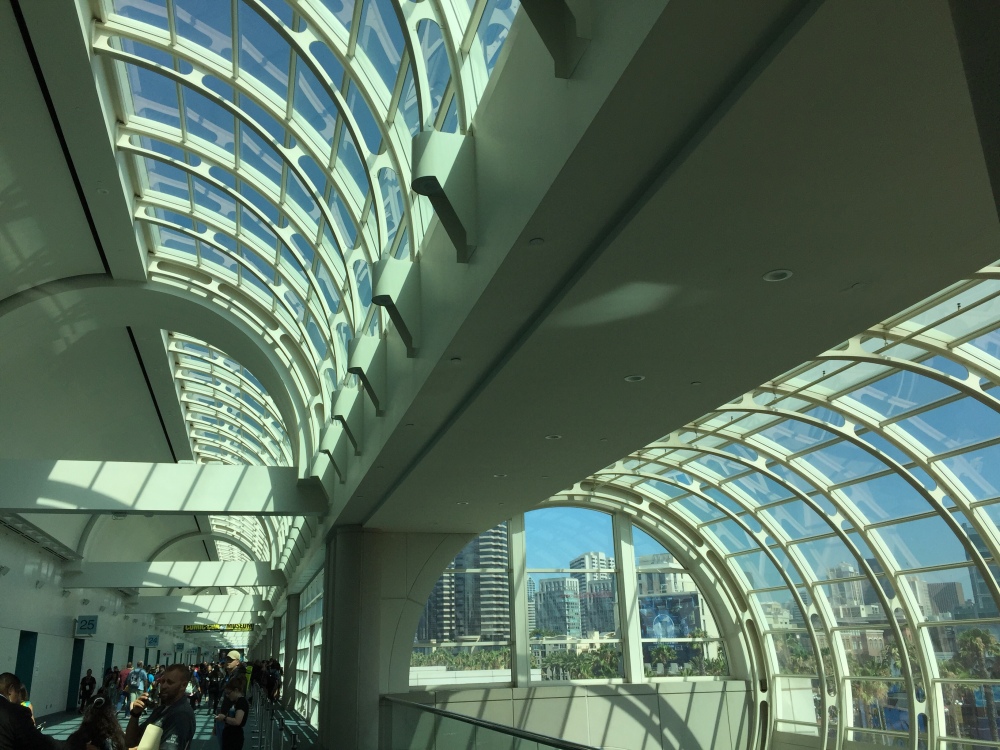 Earlier this year, I wrote a 50th anniversary salute to one of my favorite movies of all-time; “2001: A Space Odyssey.”  Today I attended an anniversary panel for the film.   The celebration will culminate in a fully remastered 4K rerelease of the movie from the original 65mm camera negative.  The 4K/blu-ray rerelease of “2001” will street on October 30th.

Here are some pics from the panel: 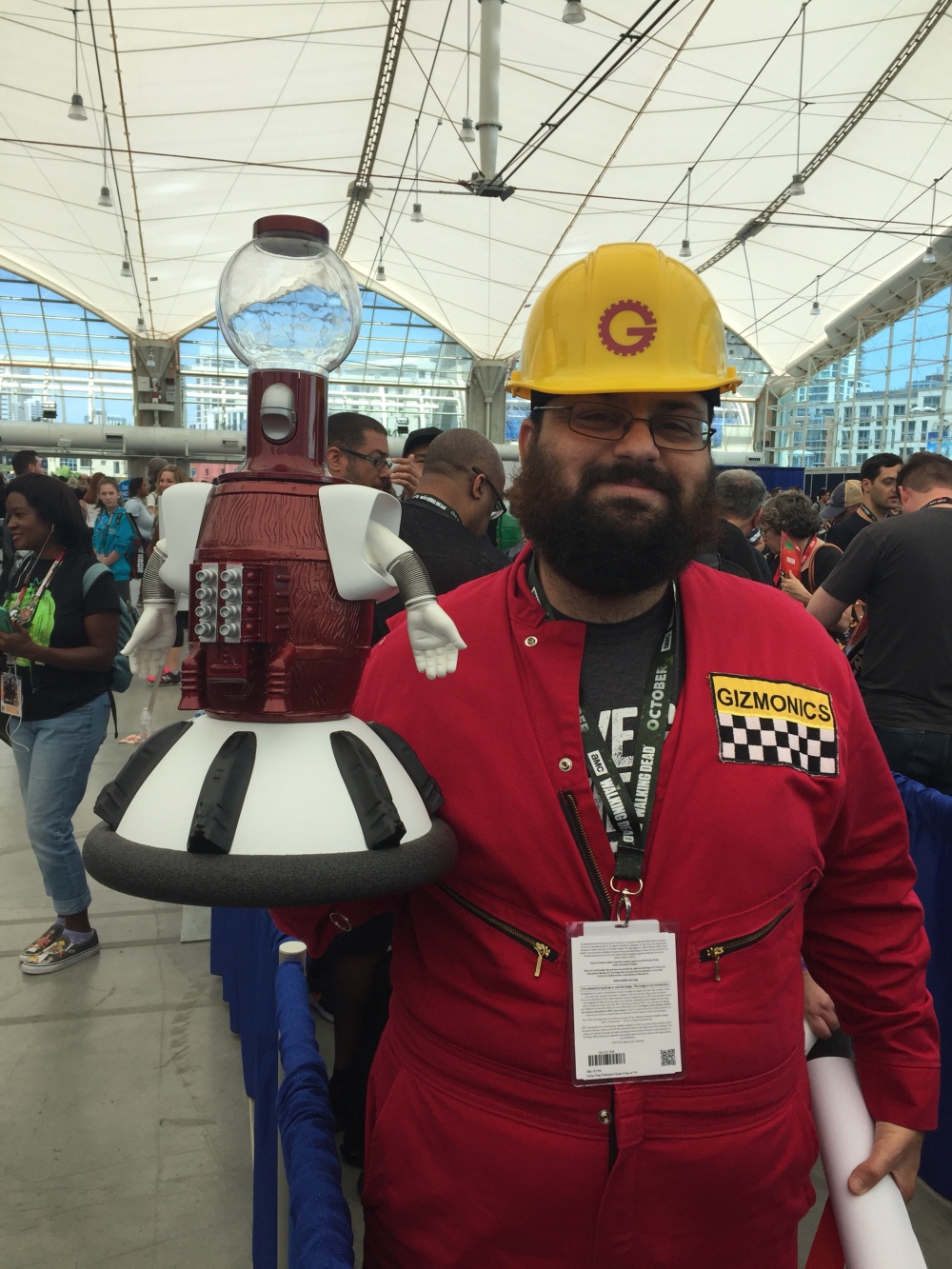 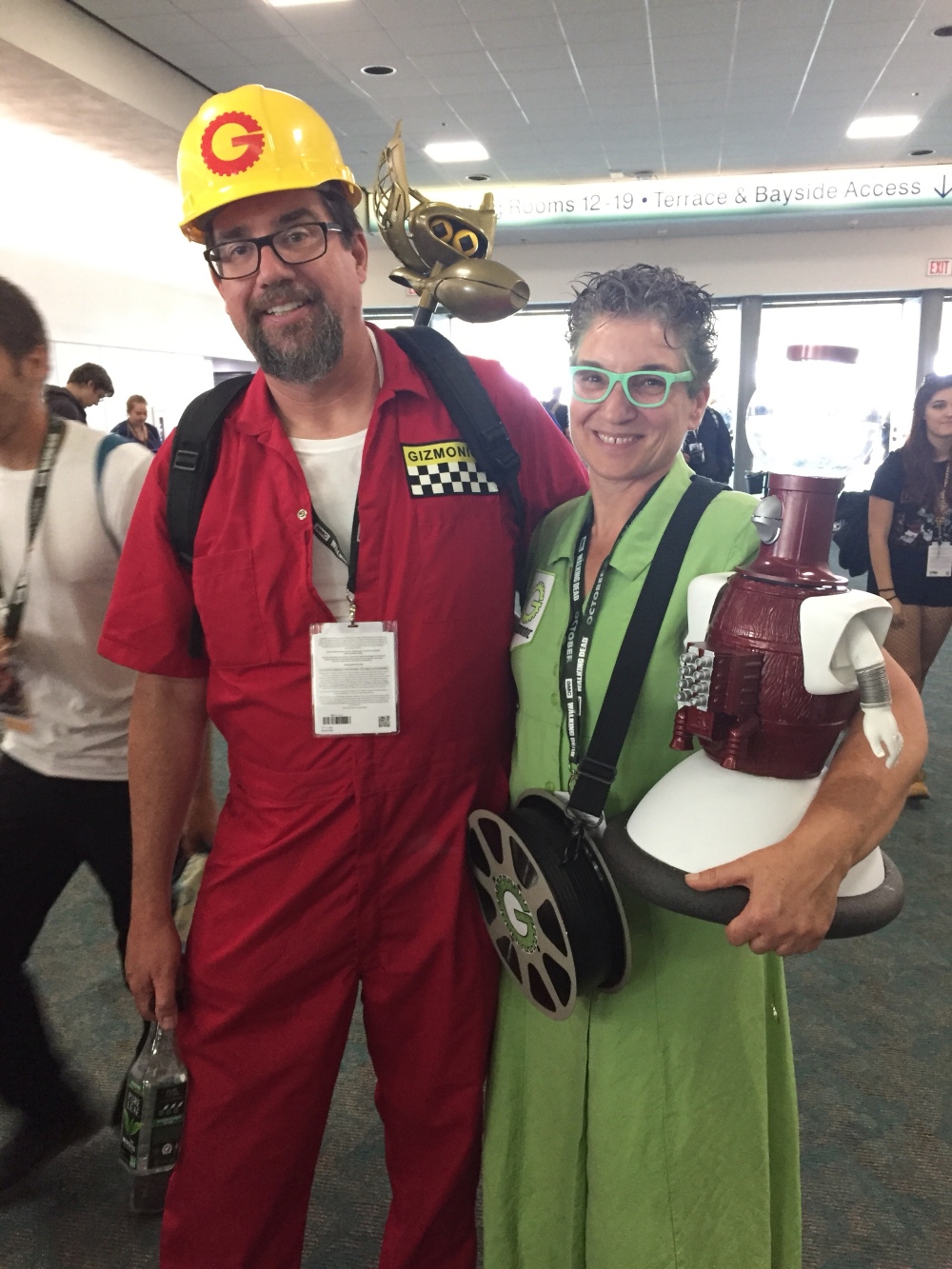 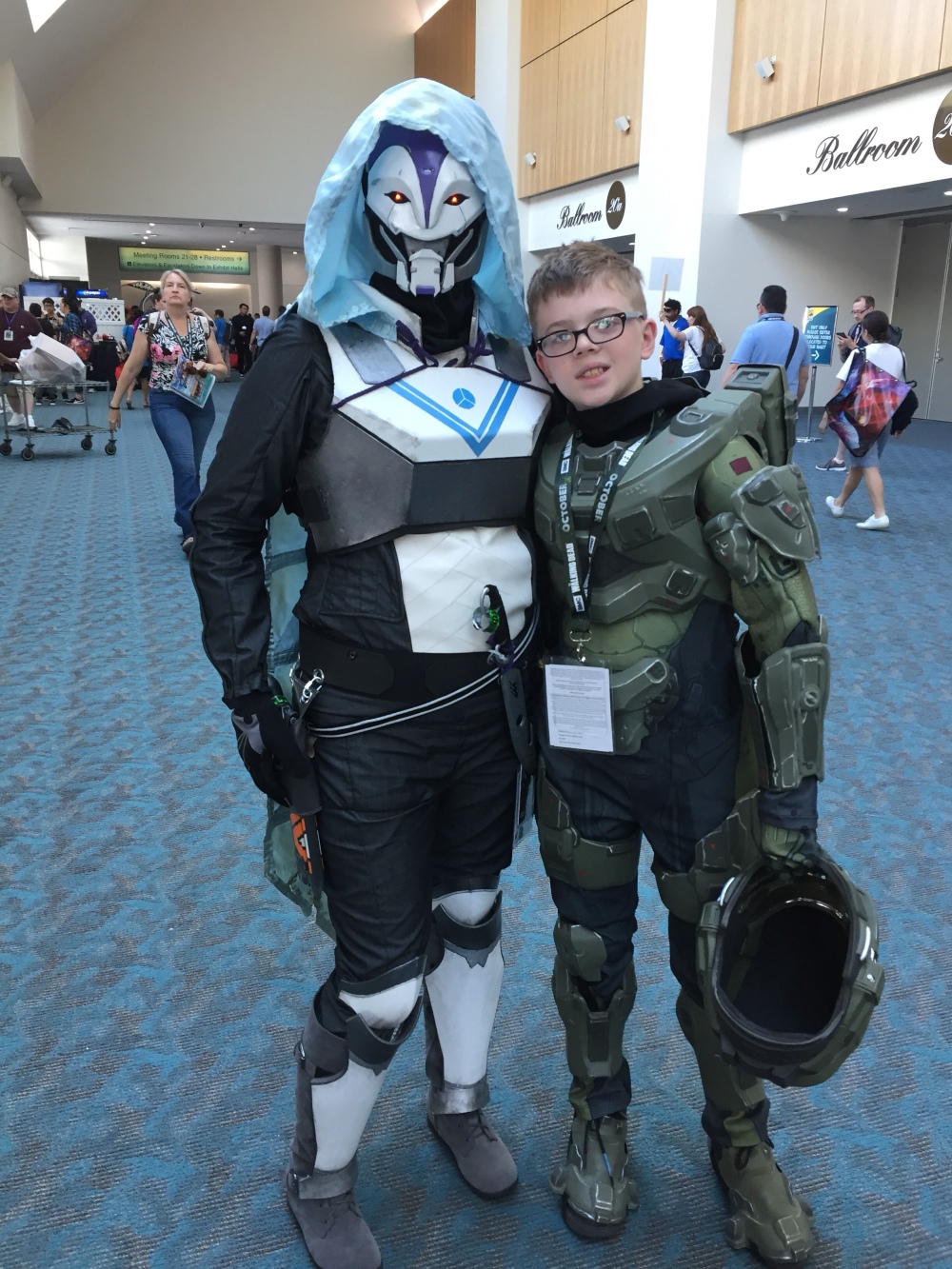 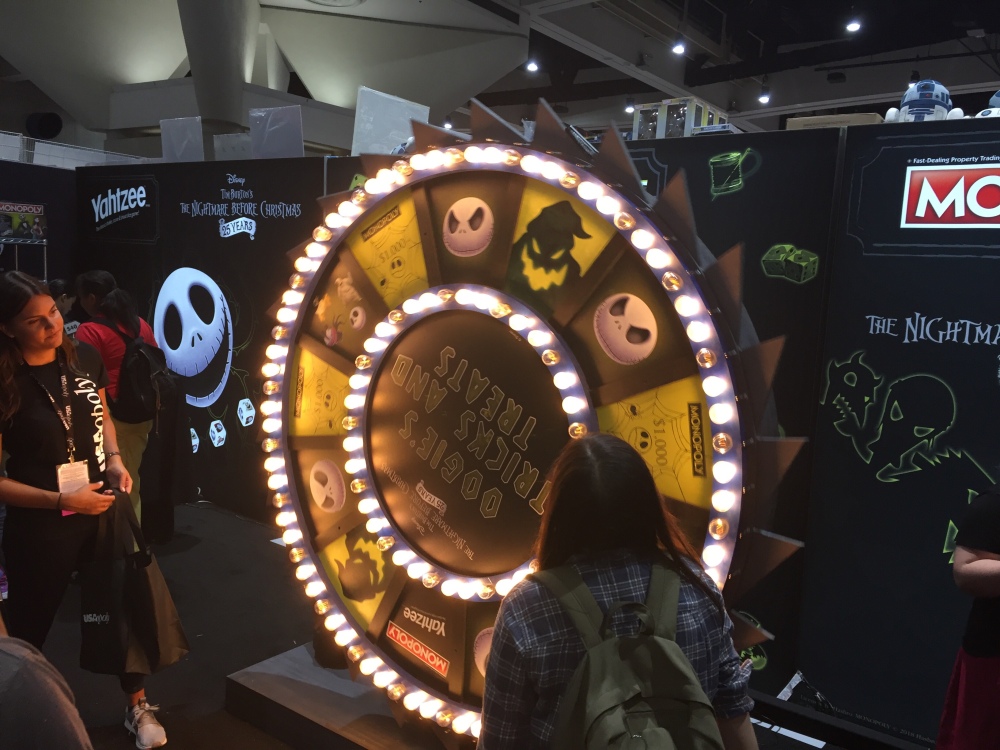 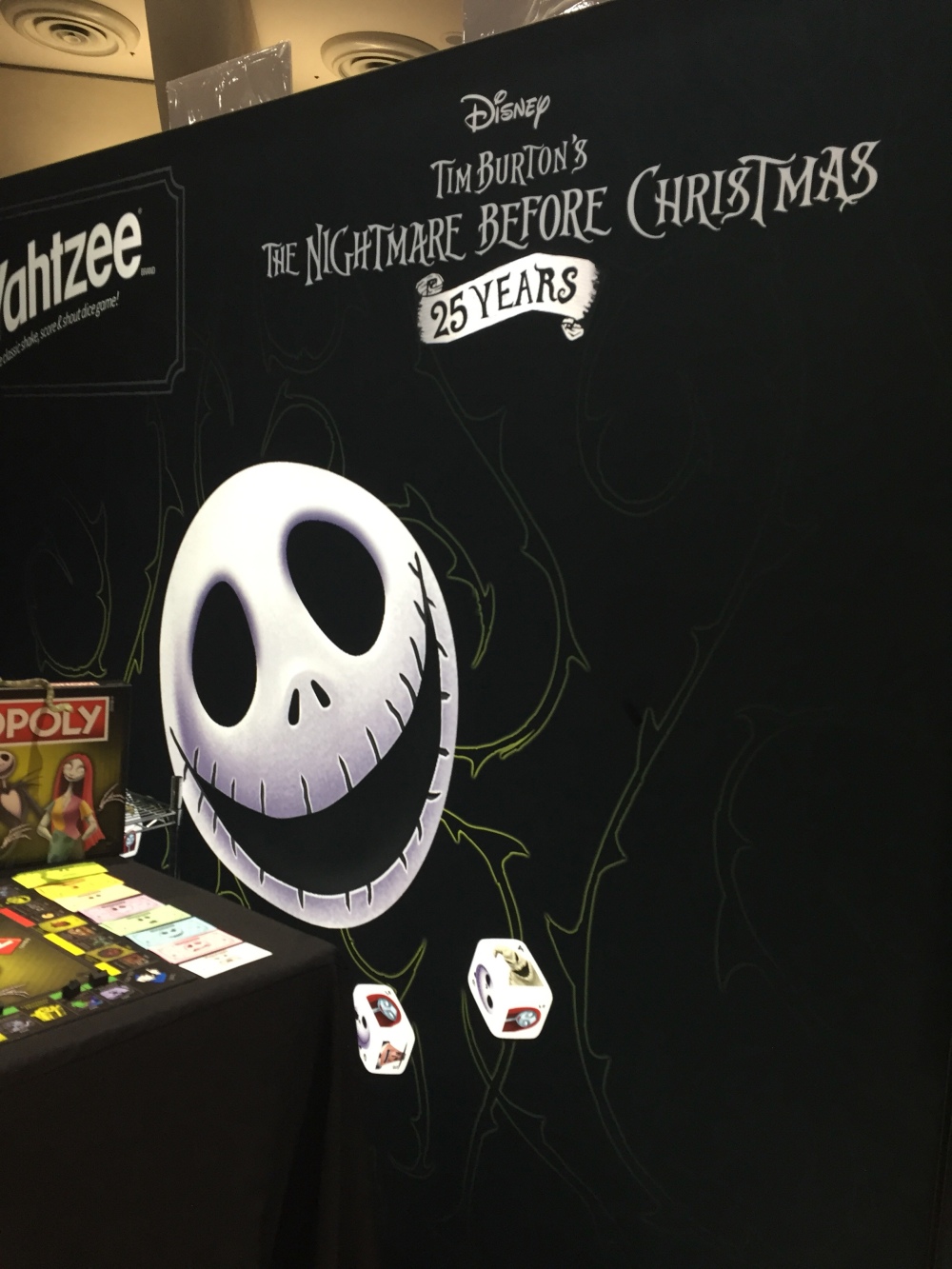 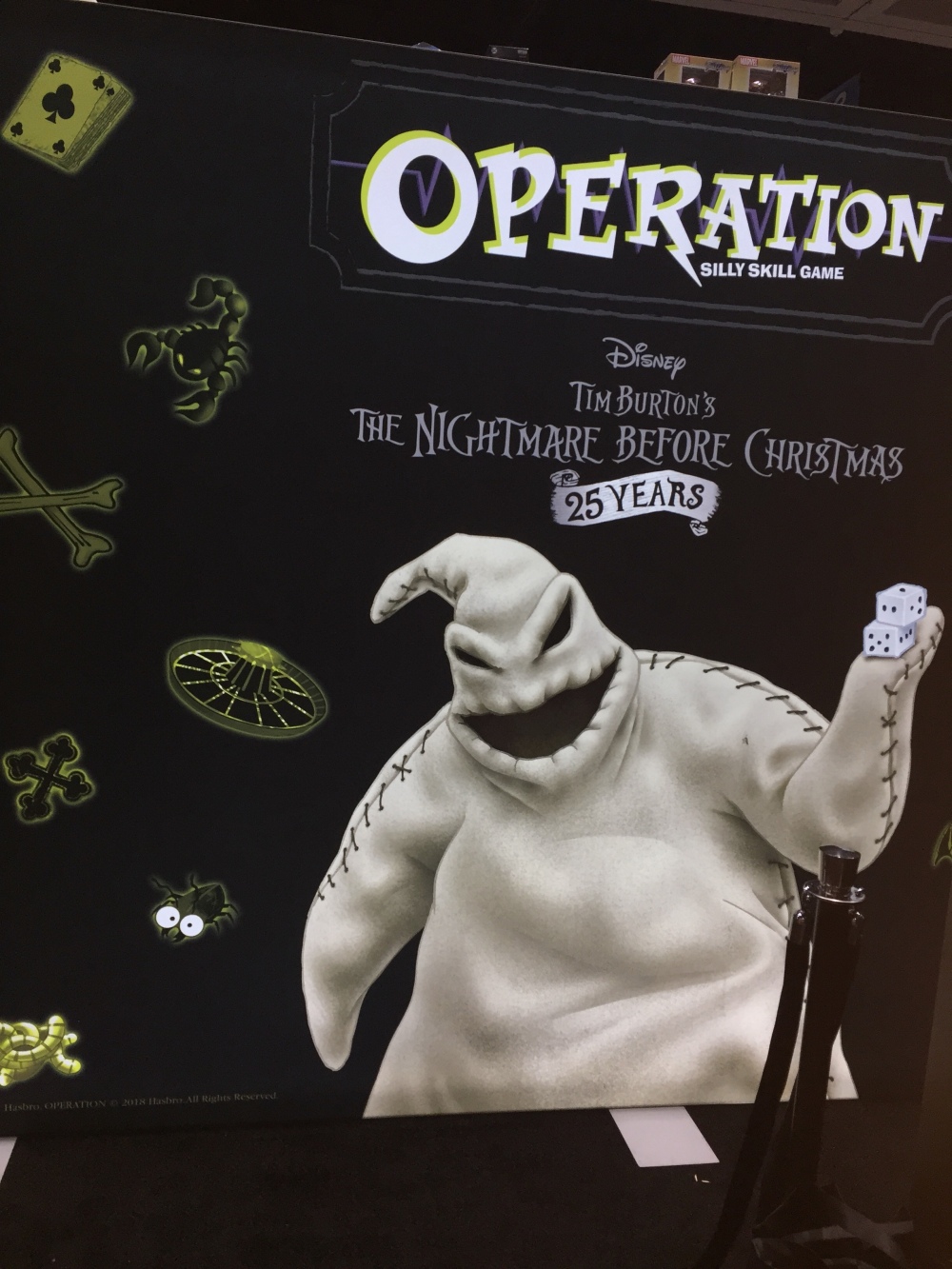 Then I saw the “COSMOS” photo-op booth, where I just had to get my photo (in my full Fred Flintstone costume, of course.  Hmm, a caveman traversing time and space; there’s a series in that, I think…).   The new 2014 COSMOS series, a sequel of sorts to the late Carl Sagan’s 1980 series, was hosted by Neil deGrasse Tyson (whom my wife and I had the pleasure of meeting at our Comic Con hotel restaurant 6 years ago), and was produced by Brannon Braga (“Star Trek: Voyager” “The Orville”) and Seth McFarlane (“Family Guy” “American Dad” “The Orville”). 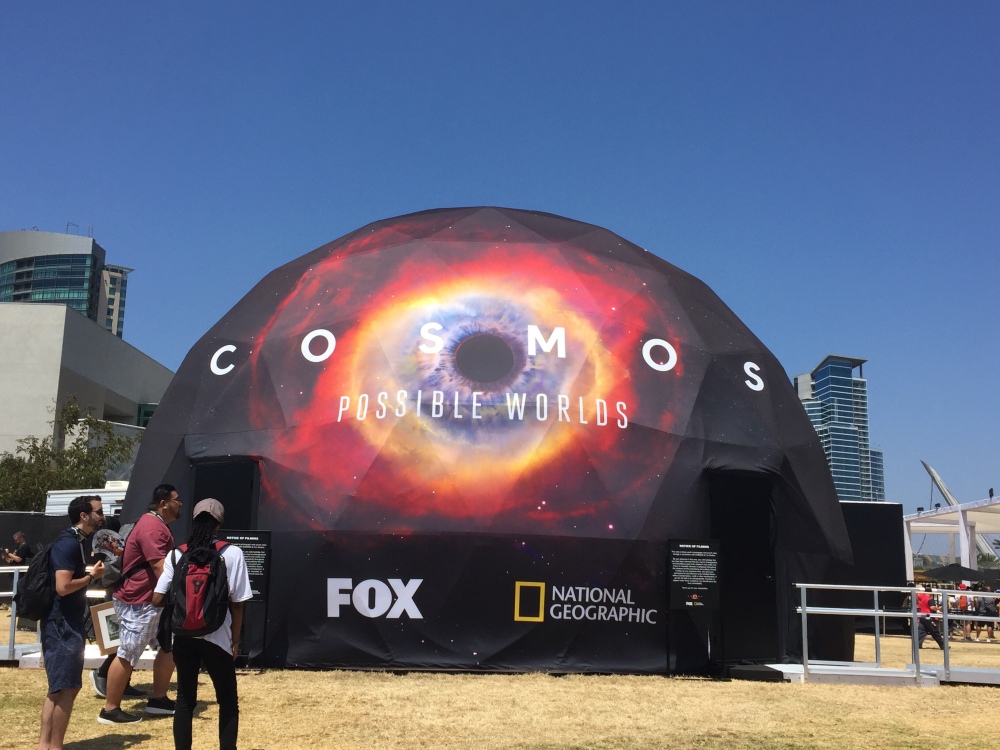 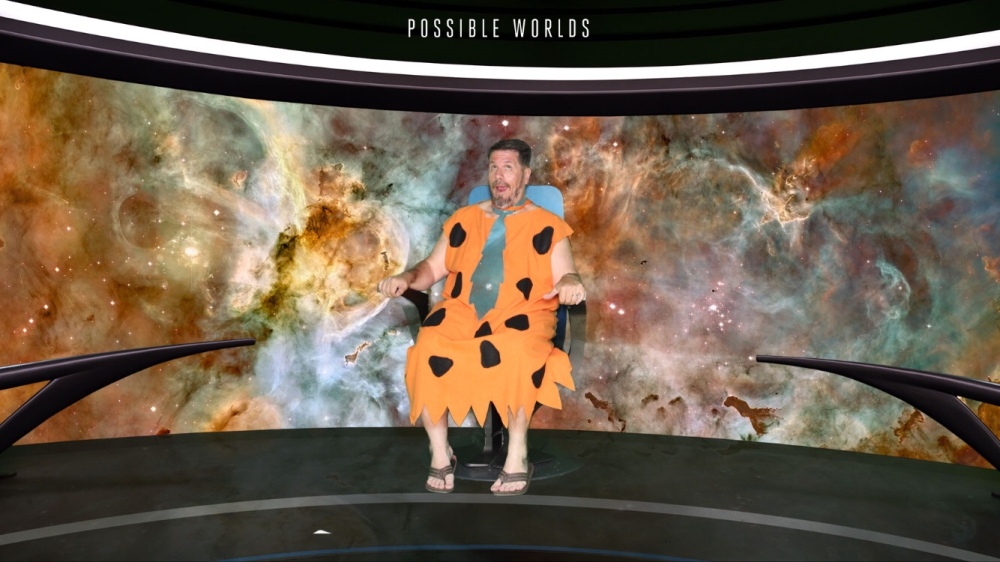 After that little star trip, I soon wandered into another on the way back to the hotel.  In the Gaslamp Quarter of downtown San Diego, about a block or two from our Marriott, I noticed that the “Star Trek: Discovery” Exhibit had no waiting (no waiting is a phrase you don’t hear at San Diego Comic Con very often!).    The theme of this year’s exhibit was the show’s costumes and props from its “Mirror Universe” arc, which comprised several episodes near the end of the show’s first year (season 2 will debut on CBS All Access streaming sometime in early 2019). 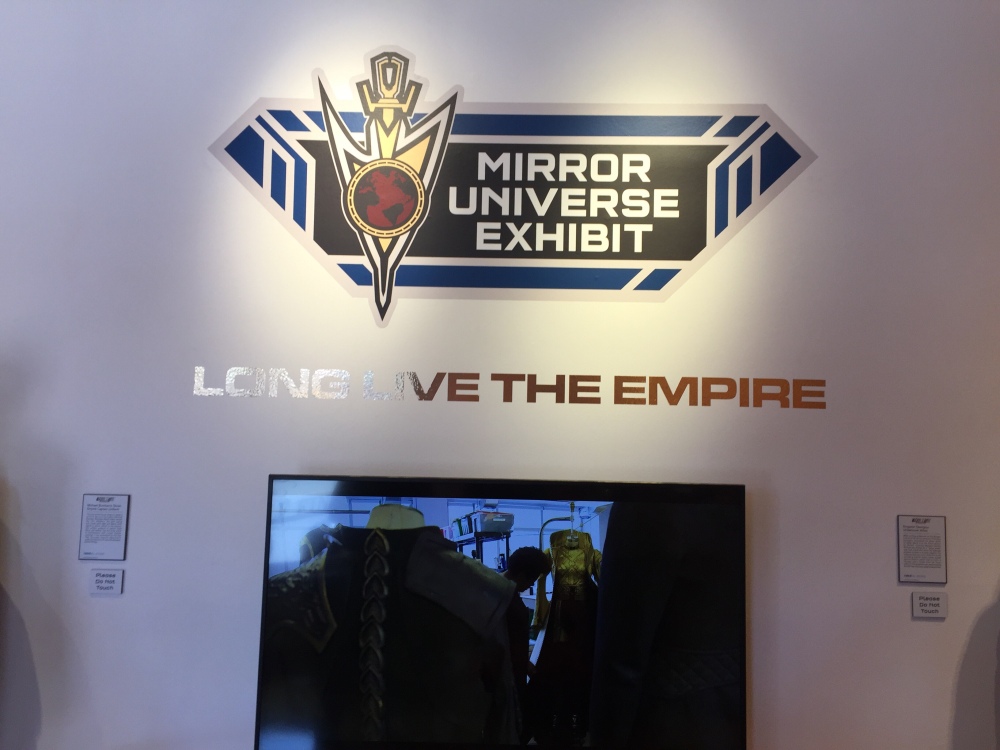 I was most impressed with the level of detail of the evil “Emperor Philipa Georgiou”(Michelle Yeoh) and Captain Gabriel Lorca (Jason Isaac) costumes, as well as the mirror universe disguises of Starfleet officers Michael Burnham (Sonequa Martin-Green) and Cadet Sylvia Tilly (Mary Wiseman). 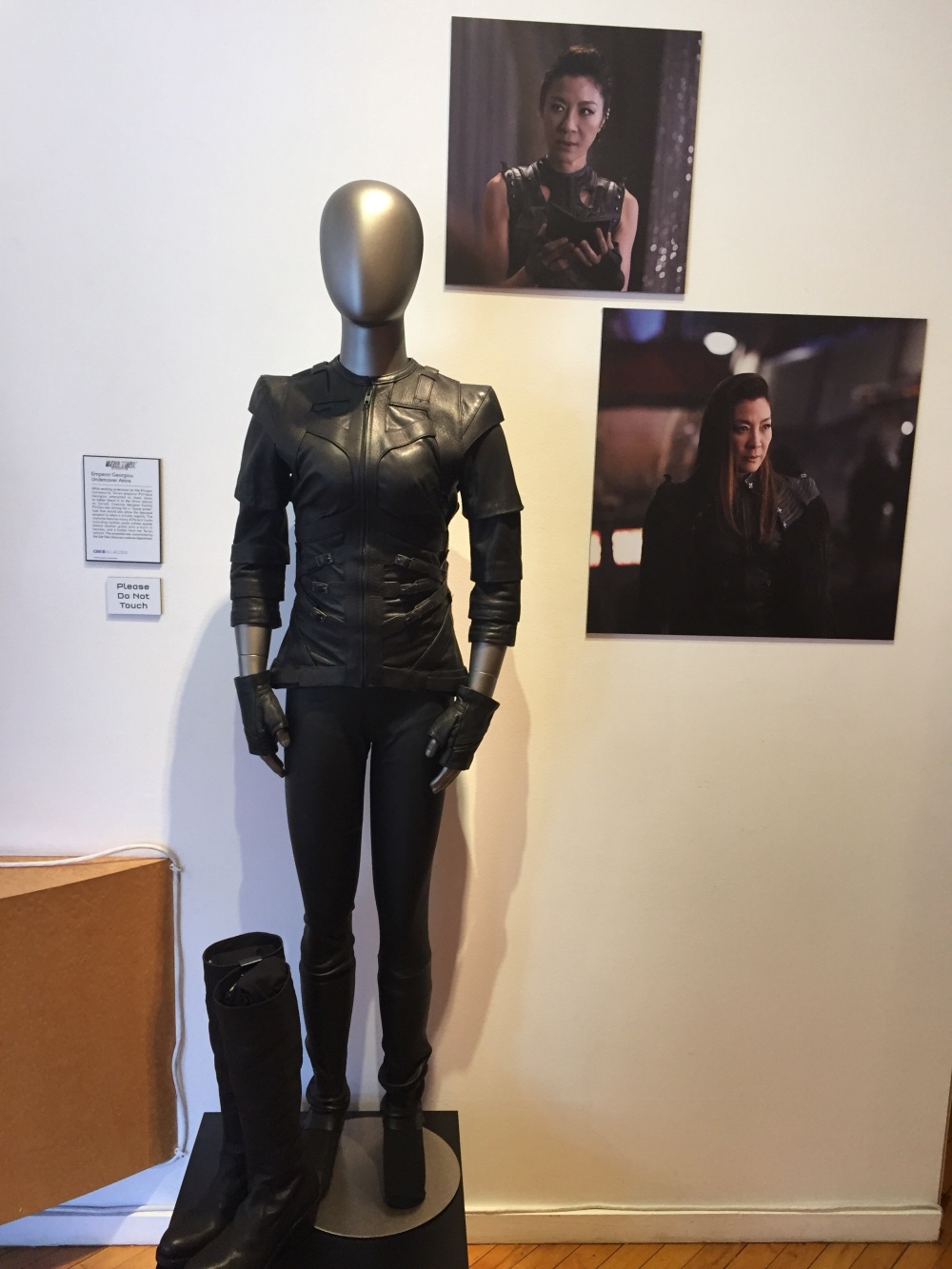 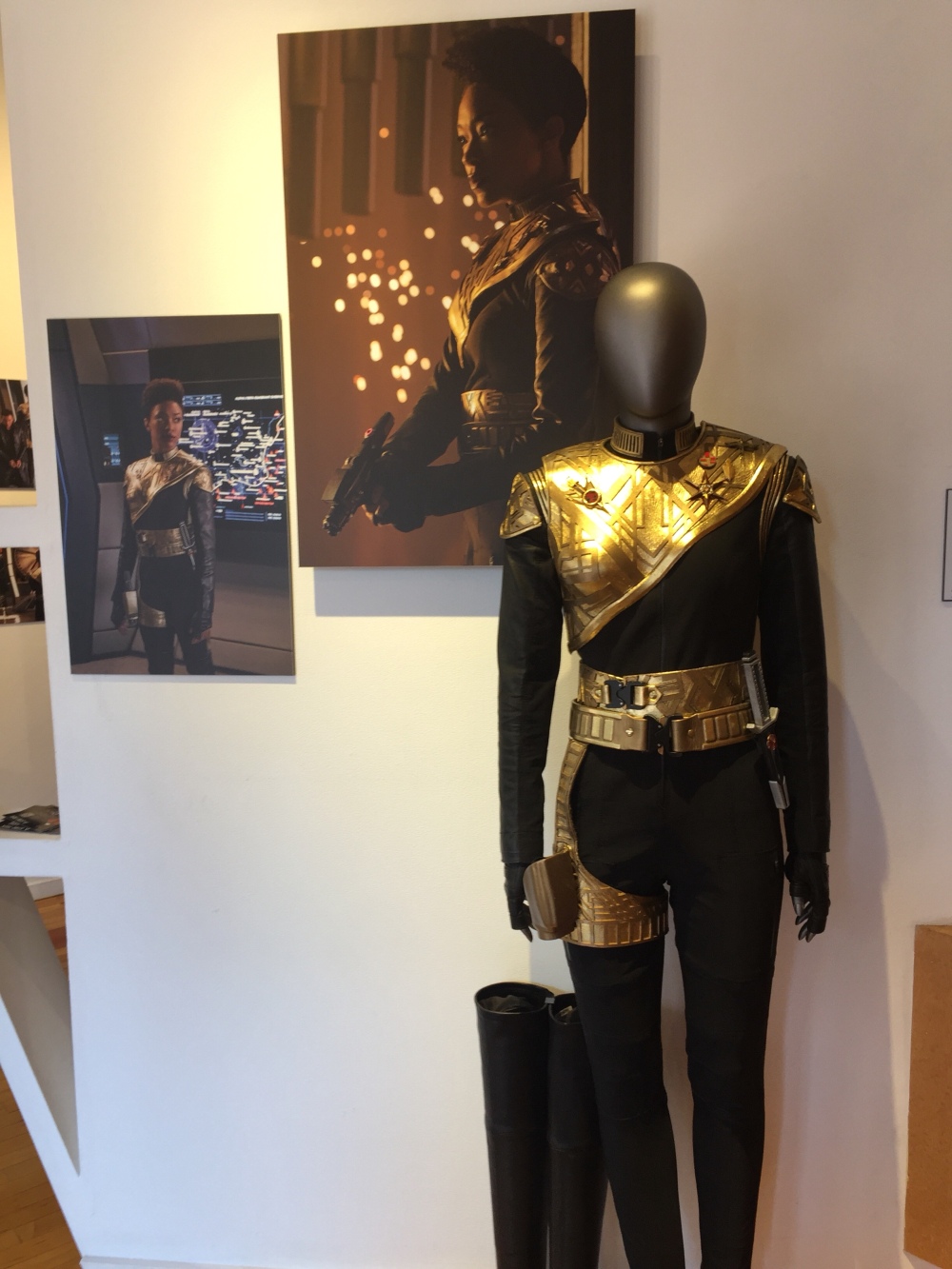 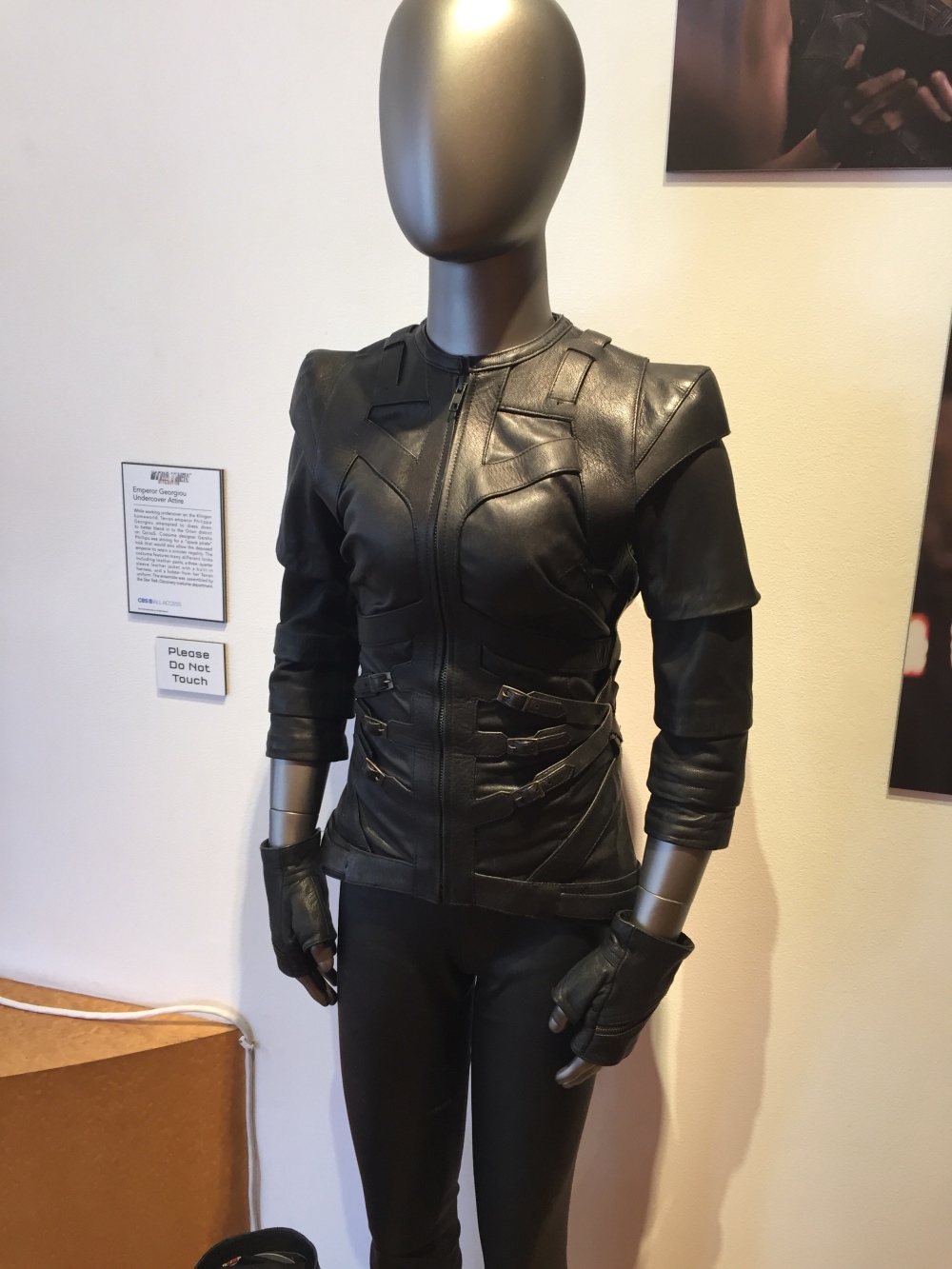 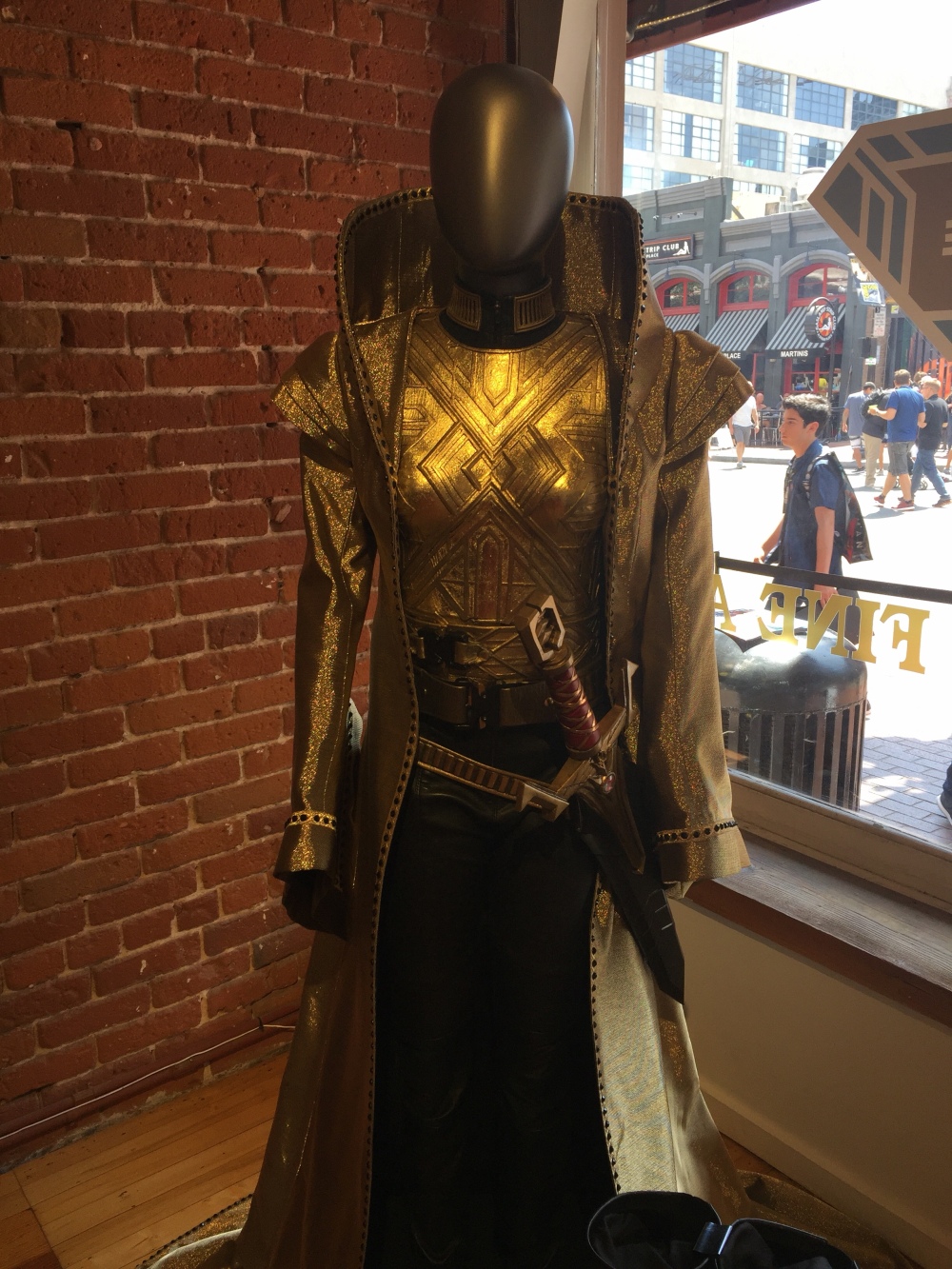 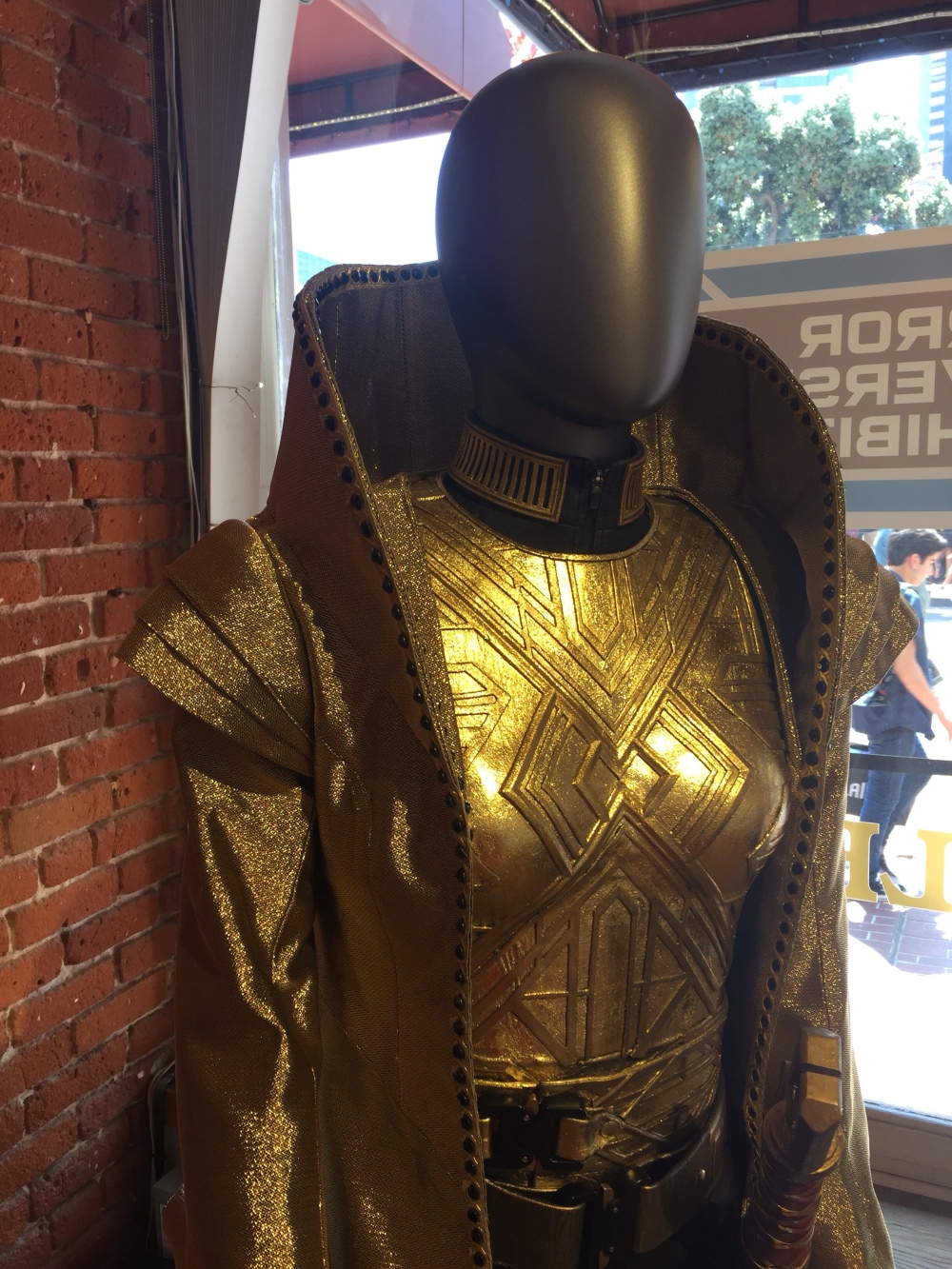 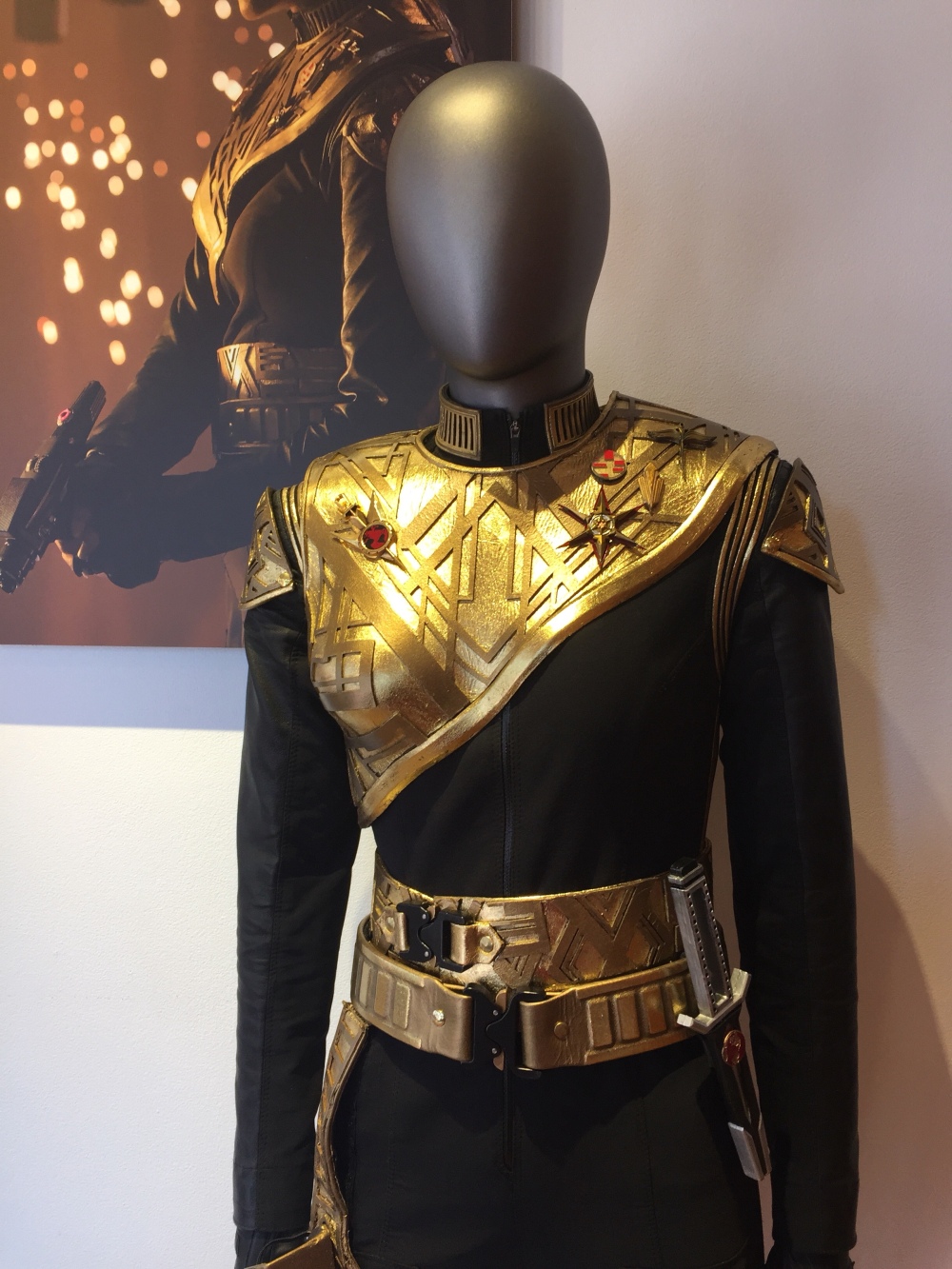 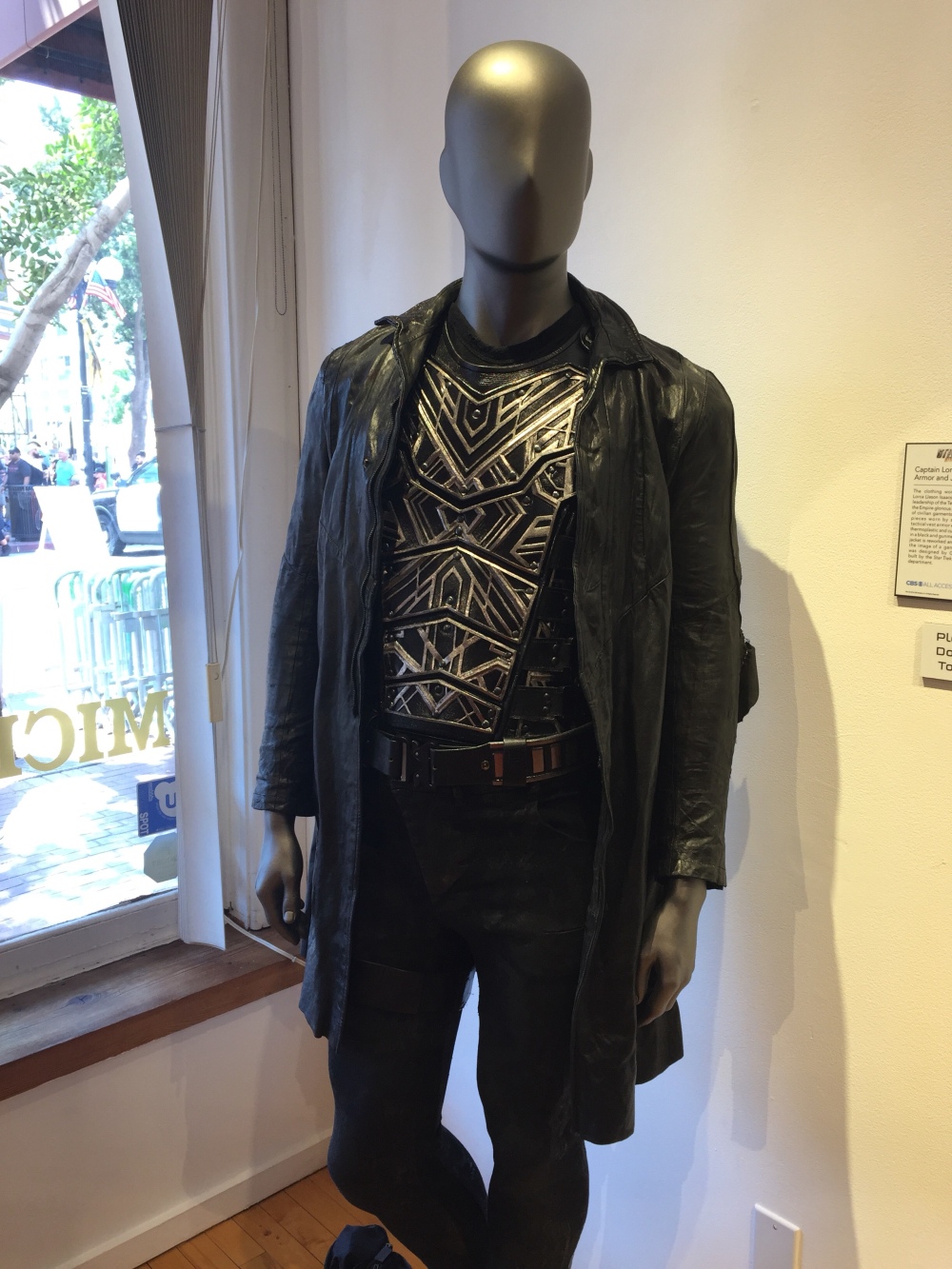 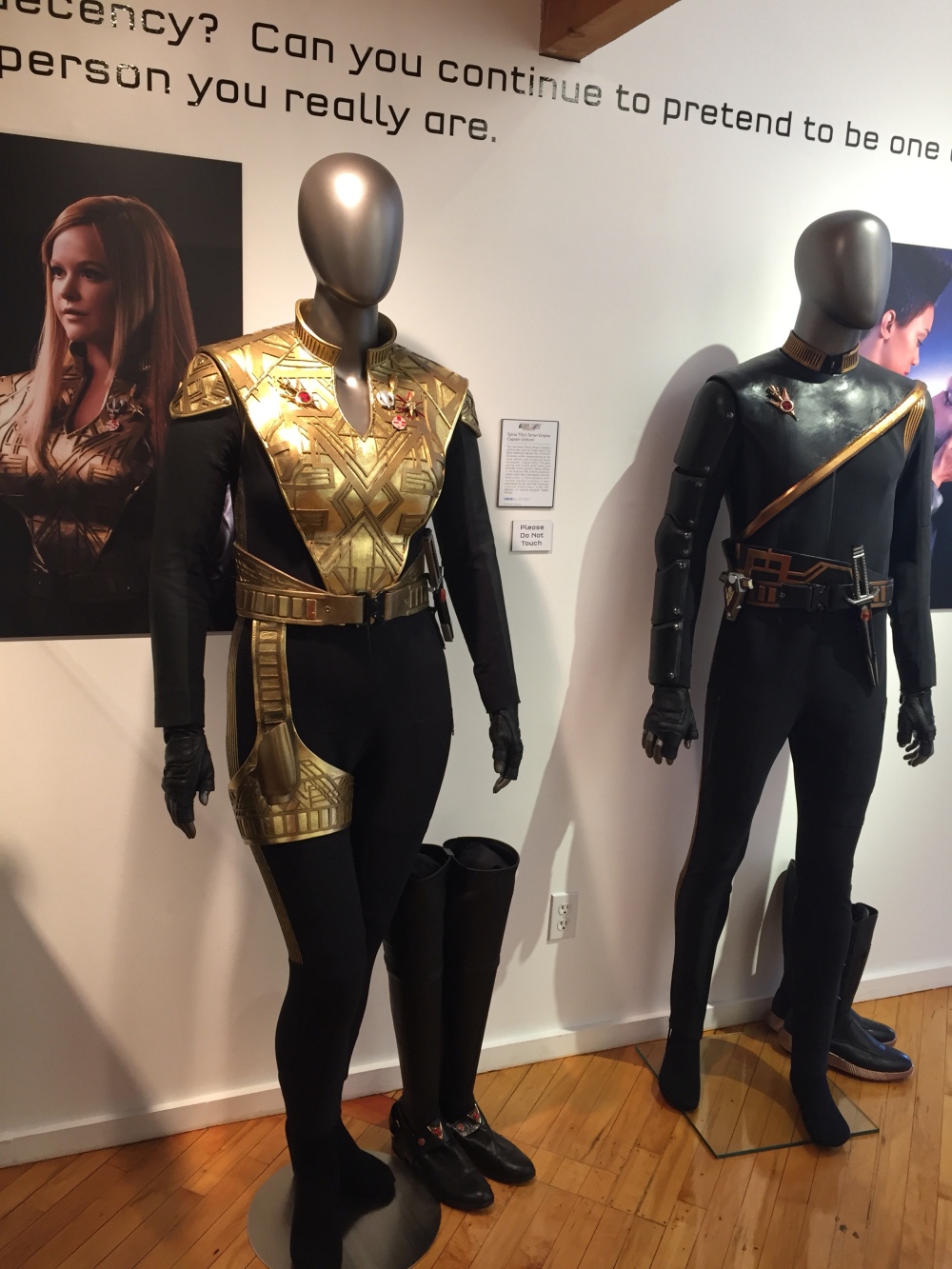 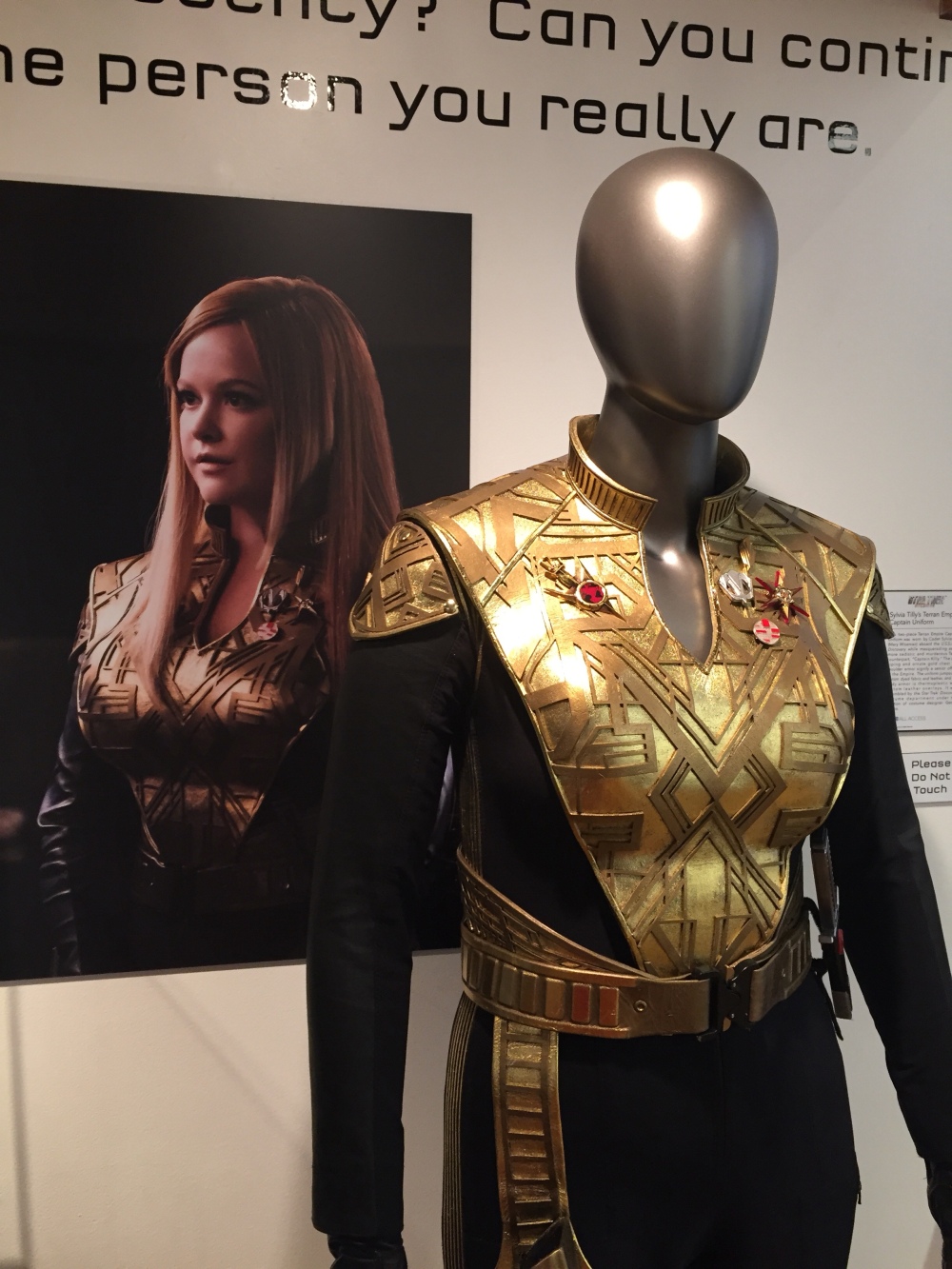 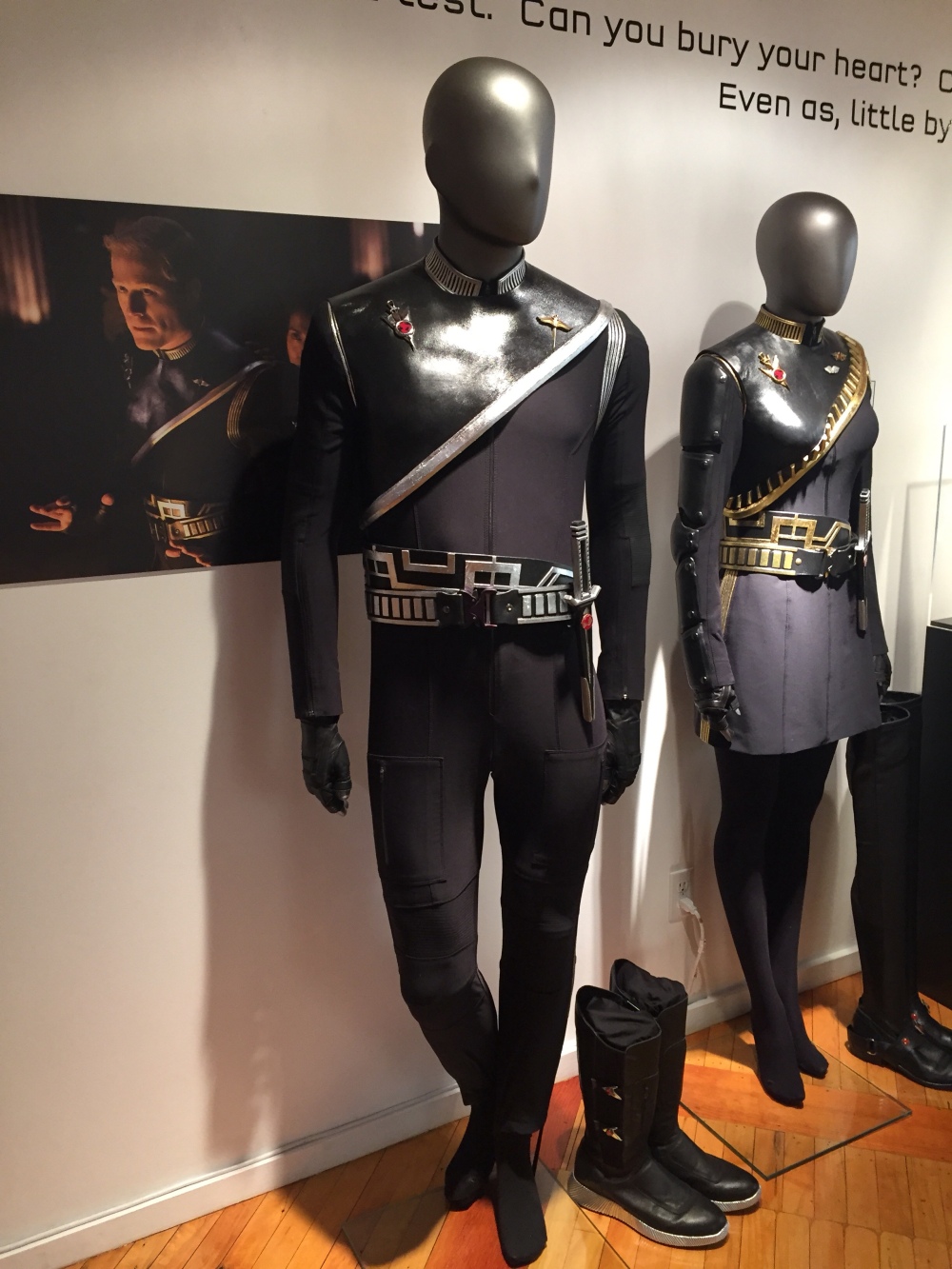 Also on display were weapons from the series, graphics, production art and… 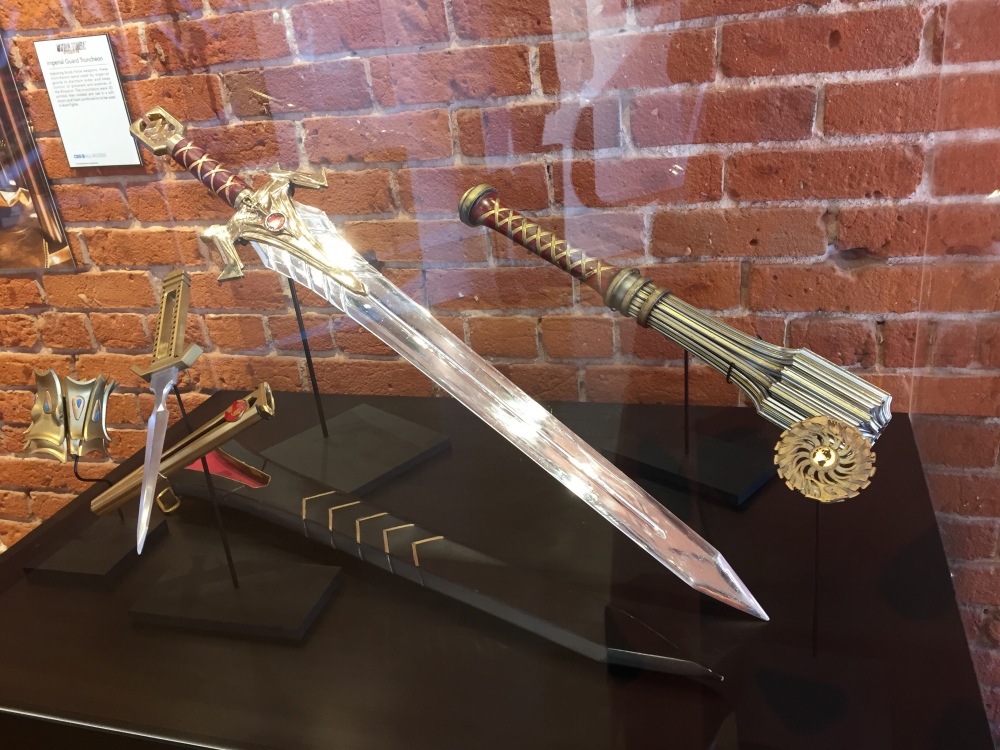 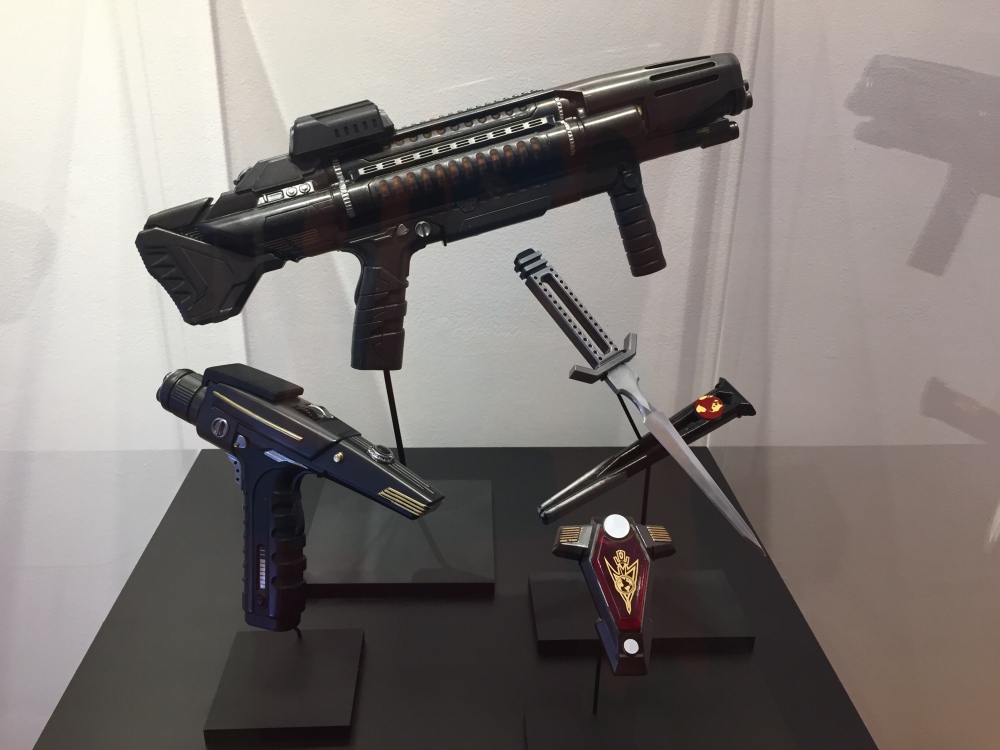 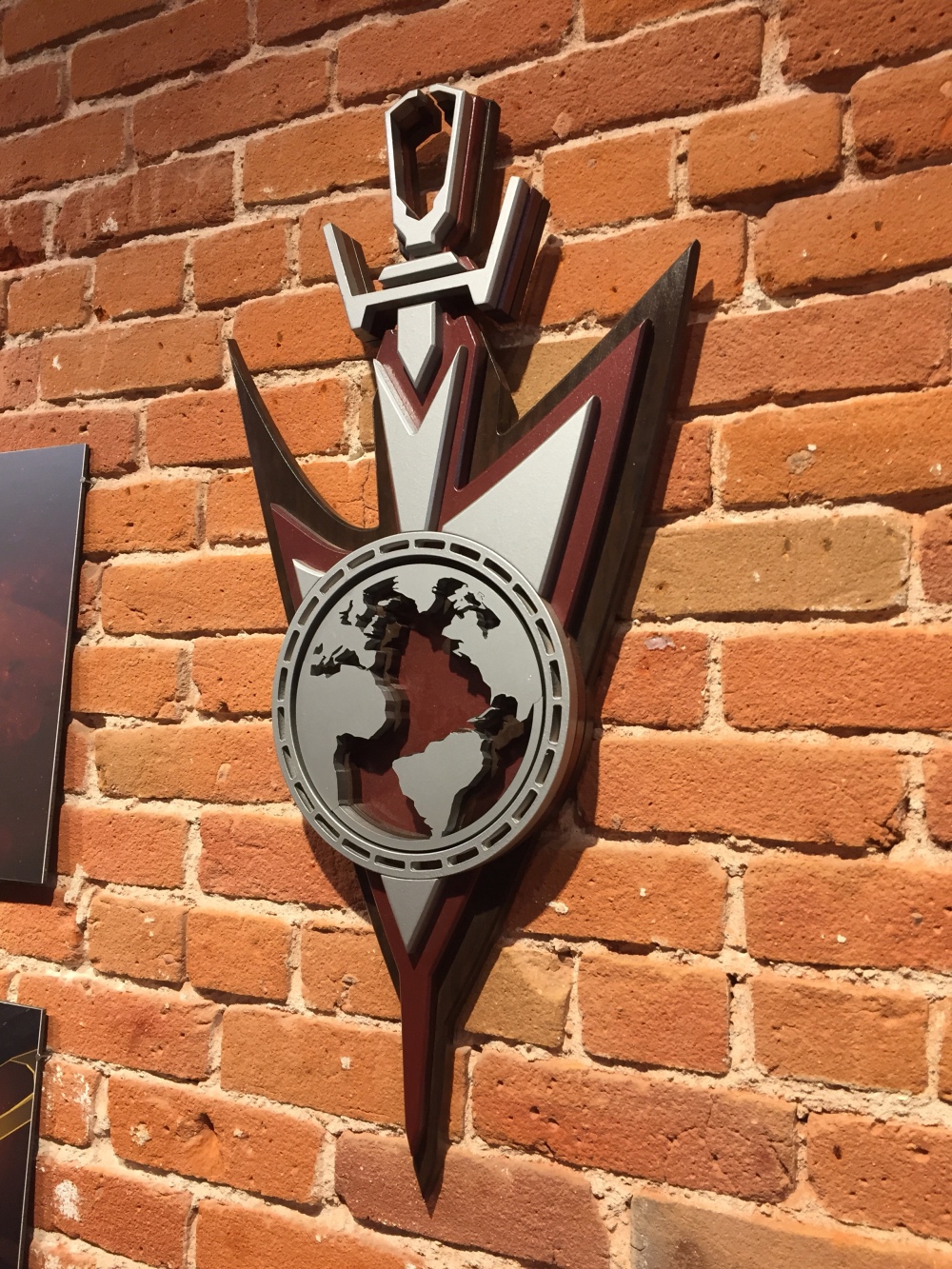 ….another green-screen photo op.  This time with Emperor Georgiou’s flagship background matted in.  Naturally, I just had to take a picture there as well. 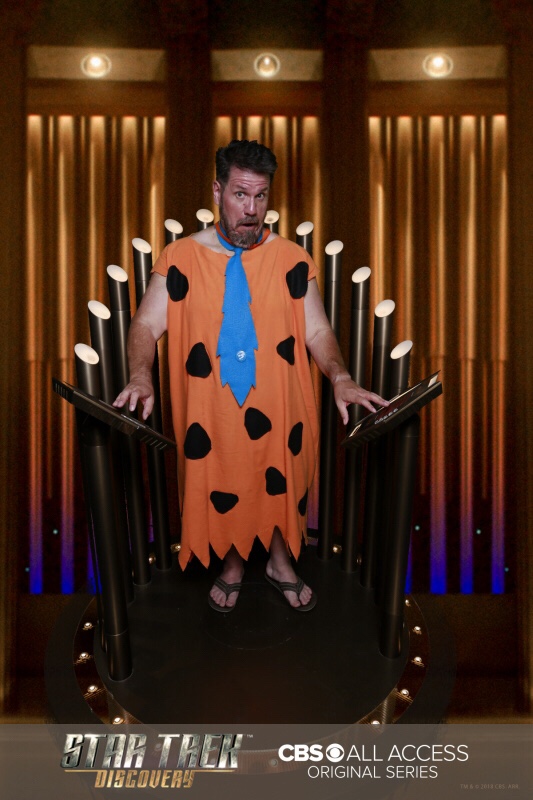 Back at the convention, my wife (as “Muriel”) slipped the paw of her cowardly dog Courage into the “Infinity Gauntlet” of the Marvel superhero movies (see: “Avengers: Infinity War”).  The gauntlet, acquired by the villain ‘Thanos’ (Josh Brolin), contain the ‘infinity stones.’  These stones offer unlimited power over the entire universe: 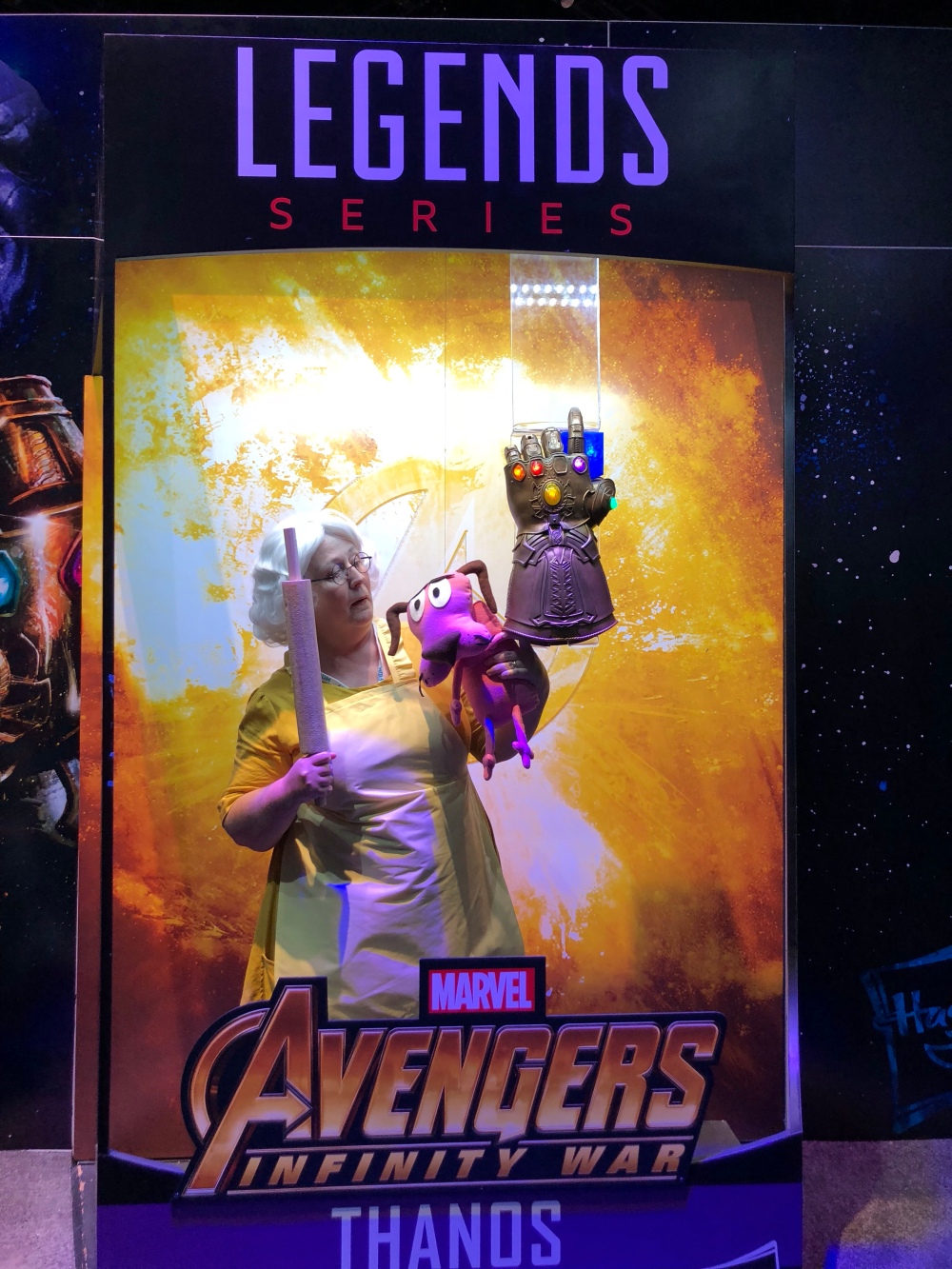 After my wife and I mastered all of space and time, I decided to get myself a souvenir from the Discovery Exhibit.  This was a souvenir that could also double as a cosplay at the Vegas Star Trek convention I’m attending next month; a “Disco” t-shirt worn by the crew of the USS Discovery (NCC-1031) during off-hours and exercise (they had one in my size, too…how cool is that?!). 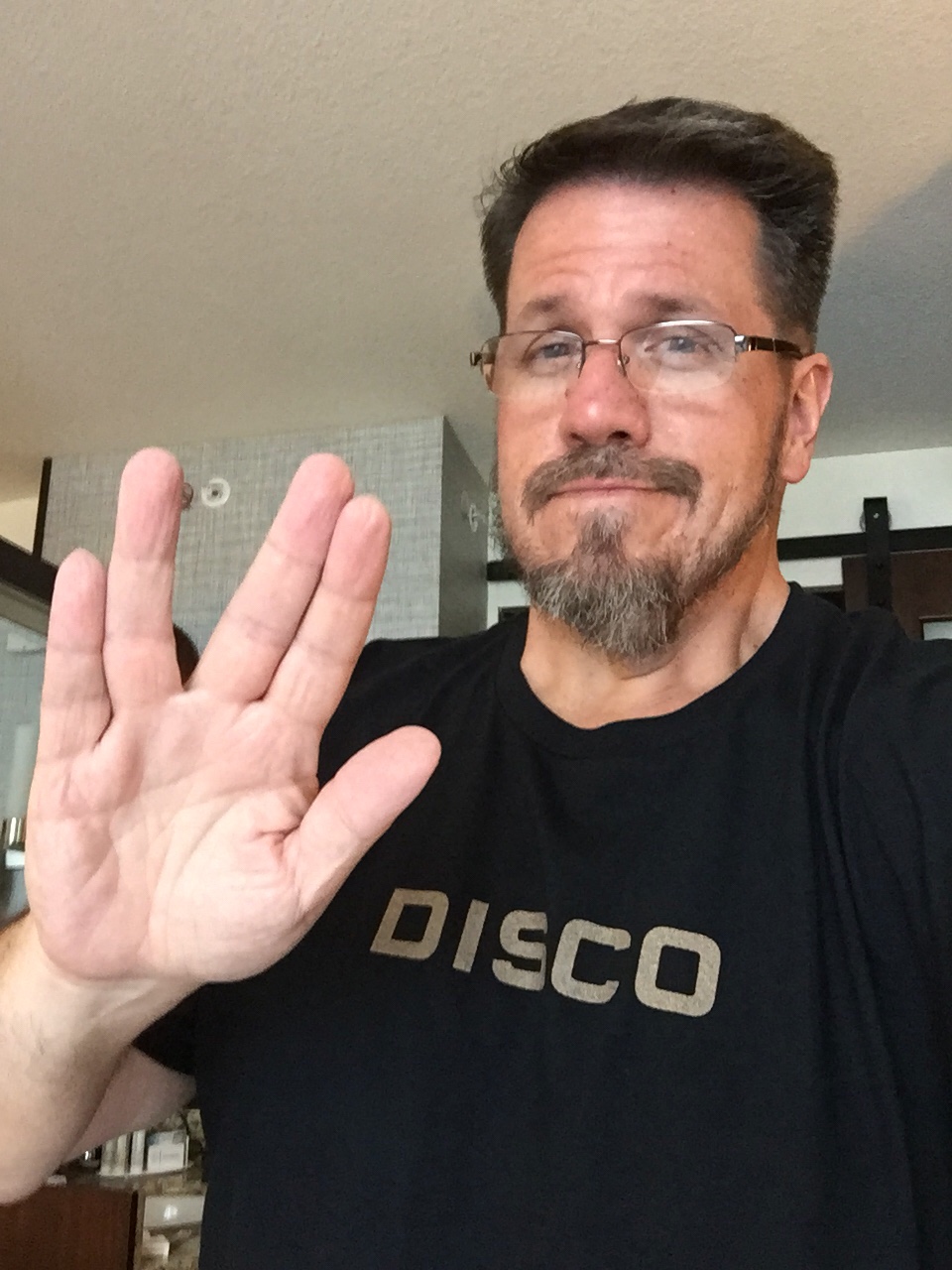 Normally I’m not a fan of printed t-shirts (I like my clothing nice and boring, thank you very much), but since this simple t-shirt has the advantage of doubling as Star Trek cosplay?  Well, I couldn’t resist.  In fact, I liked it so much I think I might just grab another one at the Discovery Exhibit tomorrow as well…

Thanks again for reading.

More to come in the days ahead, I promise…stay tuned! 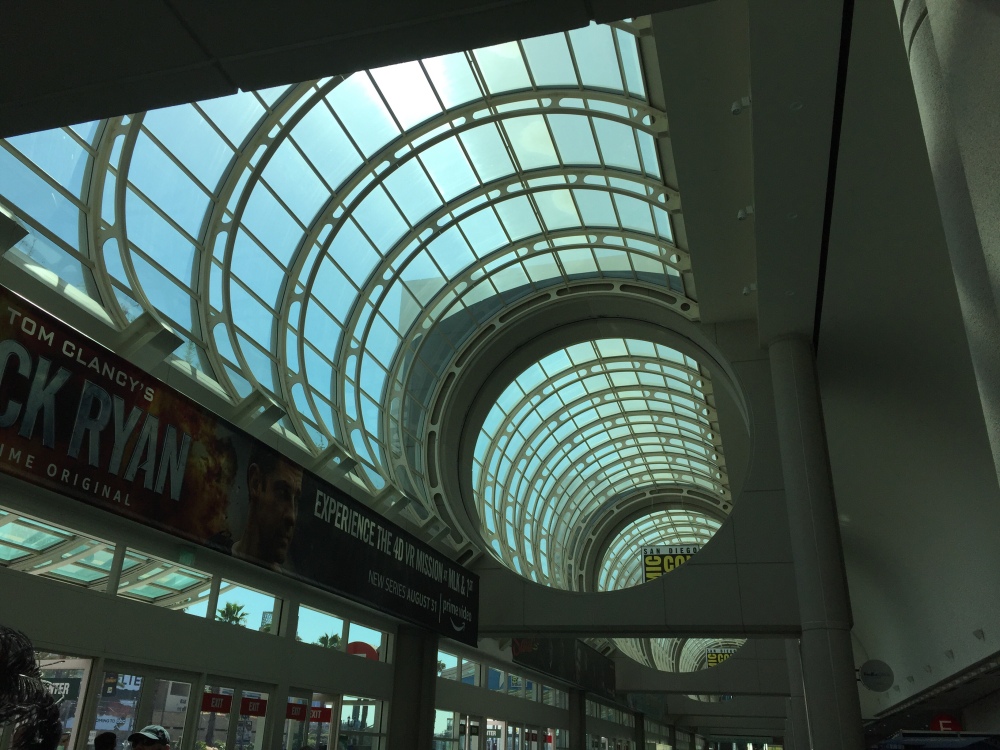