Let’s skip the preamble and just dig in…

As we saw in last week’s  “Vaulting Ambition” , Gabriel Lorca’s (Jason Isaacs) mirror-universe origins have been revealed.   He immediately sets about freeing his previously failed coup’s comrades, who have spent over a year being punished in ‘agonizer booths’;  including mirror-Landry (Rekha Sharma), whose prime-self was killed by the tardigrade earlier in the season.   Now they’re loose, armed and ready to finish their previously aborted capture of Emperor Georgiou’s throne.

Lorca and Landry find a cloaked mirror-Stamets in hiding, and recruit the reluctant scientist to their cause, despite their lack of trust and dislike of each other.   Lorca, as usual, uses whomever he needs to achieve his ends.

Burnham makes another appeal to the Emperor, mirror-Georgiou (Michelle Yeoh), in a hope to recruit her against Lorca; but she fails.  Mirror-Georgiou’s troops attack, and Burnham has to make a hasty escape…

In Discovery’s engine room, acting captain Saru (Doug Jones) and a fully recovered Lt. Stamets (Anthony Rapp) discover that the mirror universe’s ISS Charon (the Imperial flagship) uses a energy-draining orb to sap energy directly from the mycelium network; at a rate faster than can be safely replenished.  In short, it’s not only killing the mycelium network, but it also threatens ALL life across the multiverse.

Mirror-Georgiou’s day gets a whole lot worse when Lorca’s freed troops take her throne room, and she is forced to do an emergency beam-out to save her own neck.  Lorca is not pleased that mirror-Stamets failed to alert him to the fact that Georgiou “could do that.”

A fugitive Burnham manages to get a discreet transmission to Discovery.  She immediately alerts them to Lorca’s true nature, and tells them to get ready to attack the ISS Charon’s energy-draining orb when she drops the protective containment field.

While she is on the run, Burnham and Lorca communicate (in a “Die Hard”-ish way) via a scrambled signal, as he once again attempts (rather strongly) to appeal to her to join his coup and leave her universe behind.   Lorca badly wants Burnham at his side.

The still on-the-run Burnham eventually locates the similarly hiding mirror-Georgiou in her ‘sanctuary’ aboard the ISS Charon, and she makes one more appeal.   With a common foe in Lorca, and with sentiment over each other’s counterparts (Georgiou was Burnham’s late beloved captain, mirror-Burnham was Georgiou’s beloved late ‘daughter’), an alliance is forged.   Their plan is to infiltrate the throne room, with mirror-Georgiou pretending to be Burnham’s offering to her new ‘emperor’ Lorca.   Their plan seems to succeed as they gain access.

Once inside the throne room, Lorca decides to execute his no-longer-needed ally, mirror-Stamets.  Lorca teasingly threatens to drop him directly into his spore-draining energy orb, saying it’d be “poetic”…then simply has mirror-Stamets vaporized with a phaser instead, because (as he says), “I hate poetry.”

Back aboard Discovery, Tilly (Mary Wiseman) and Stamets realize that the ship may not survive the powerful destruction of the energy orb.  Saru, truly rising to the role of captain, makes an inspirational speech; he states that while his species instinctively senses the approach of death, he does not sense it now.   He reiterates his faith in his crew to win the day.    The speech is a truly great Saru moment, and Doug Jones wears it very well.

Stamets and Tilly come up with a way to possibly survive the orb’s destruction by ‘riding the wave’ of energy and by using the ship’s own warp bubble in conjunction with the spore drive to shield themselves as they jump away.

Burham, under the guise of surrendering herself to Lorca, signals Discovery to drop out of warp and stand by.   Saru is waiting for the containment field to drop so that he can destroy the orb, as personal combat breaks out in the throne room.   Guards and henchmen are systematically vaporized as the combatants are reduced to Lorca, mirror-Georgiou and Burnham.   Burnham has her phaser trained on Lorca as she makes a final appeal to him, but he is killed as mirror-Georgiou plunges her sword through him (in a ‘holy crap’ moment) and is then kicked into the orb’s energy core (and I swore I heard a Star Wars TIE fighter sound effect as he fell).

The Discovery’s transporter then locks onto Burnham as Lorca’s remaining troops close in.   Before she is beamed out, Burnham grabs mirror-Georgiou and the two of them are beamed aboard Discovery together… 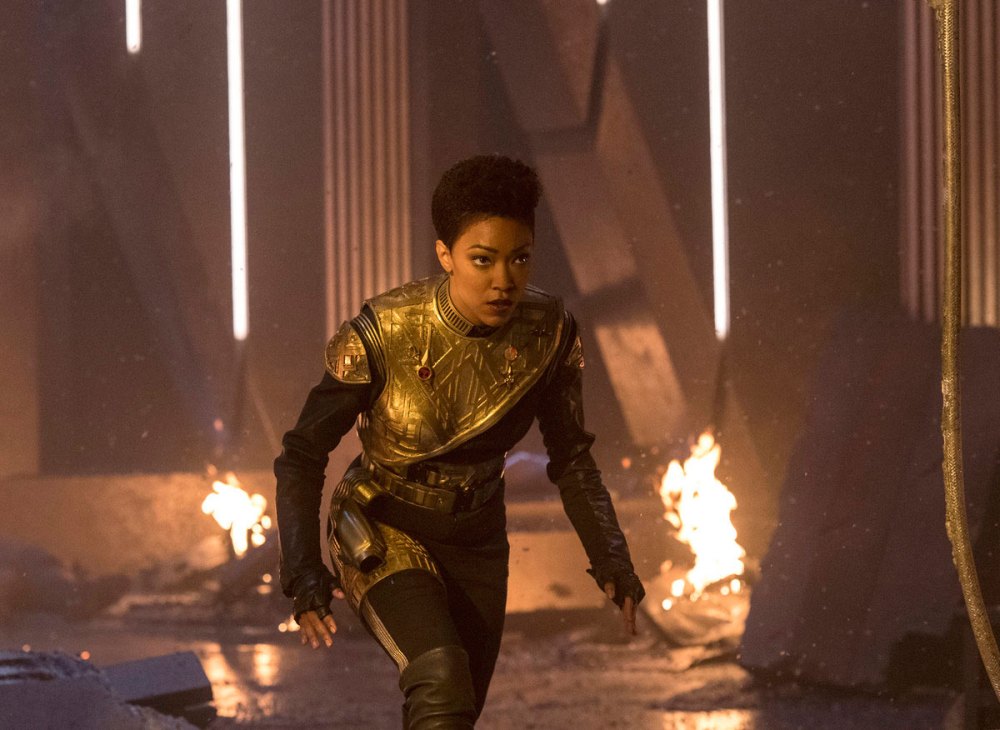 Once aboard, Discovery destroys the orb, and rides the mycelium-powered shock wave as Lt. Stamets is once again plugged into the ship’s spore drive system.  Flying through the mycelium network blind, Stamets follows ‘the music’ (via the ‘advice’ of his dead lover, Hugh) and finds a ‘clearing in the forest’ to return to their original departure point.

The ship is then returned to her original departure point, but…

….she has been returned 9 months after her disappearance; and apparently the Klingons have won the war against the Federation.

What I enjoyed about “What’s Past Is Prologue”:

*  The mirror universe was a lot of fun…

…so much so in fact, that I was sad to see it end.  I actually found myself wishing this were the season finale, because it really felt like a perfect cap to the entire year.   Having Michelle Yeoh back, the wild costumes, the heightened drama, the outing of Lorca… honestly, there were times during this mirror-universe arc where the show was on a par with the best days of  “Deep Space Nine” (still my favorite of the post-TOS Star Treks).

Saru’s best moment of the series to date.

I wasn’t sure that the character was up to the big chair, but after that inspiring, captain-worthy speech of his, I am happily eating my words.  As a huge fan of Jones’ work (also loved Jones’ work in the recently Oscar-nominated “The Shape Of Water”), I was gratified to see Saru come so far in the last few episodes.   Even more impressive is that the speech was delivered under a ton of heavy prosthetics’ makeup.

I knew it was only a matter of time before her martial arts skills were put to use, and she delivered some amazing high kicks (some of those kicks defied the hell out of gravity) as well as some cool swordplay.  That final throne room battle was easily one of the most epic fights in the history of Star Trek (all 52 years of it).   I’m usually the kind of person who gets a bit bored with overly long fighting/action sequences (I usually enjoy biting dialogue in place of tiresome action), but this was really great stuff. 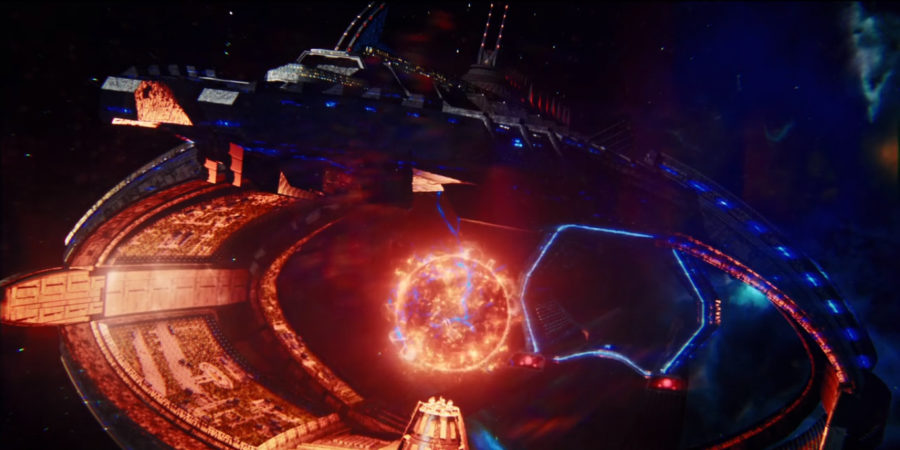 Nice to see him fully recovered and back doing what he does best.  Despite a lot of quickly conjured technobabble to set up the climax (more on that later), he and Cadet Tilly (Mary Wiseman) worked well together.   Though I do miss Dr. Hugh Culber.

This was a neat twist, because I was thinking that the Commander Landry we’d met previously (in “Context is for Kings”) felt like a mirror-universe character already.  When Lorca was outed last week, I was certain it’d be revealed that Landry was a mirror-character as well.   But nope… turns out she was just really cranky.   In fact, her mirror-self smiles a lot more.   I found this interesting, because it reaffirmed that some mirror-universe versions of characters are actually nicer people than their prime-counterparts (as the charitable, selfless mirror-Quark demonstrated in “Deep Space Nine”).   And, of course, it’s always nice to see “Battlestar Galactica” (and “Star Trek Continues”) veteran Rekha Sharma back in action again…

The ISS Charon’s energy-core is literally killing the entire mycelium network by absorbing it faster than it can be replenished.  This is classic Star Trek-style commentary on fossil fuels and their ultimately unsustainable nature.   The mycelium network’s death could result in the death of the entire multiverse itself, which is apt metaphor for carbon fuels’ impact on our fragile planet’s climate and ecosphere.  Saru and Stamets have a nice exchange about how foolish and shortsighted the Terran Empire is for not realizing this for themselves.

This is Star Trek doing what it does best; using a futuristic lens to focus on issues affecting our present.   Well done, Discovery…

My disappointments with “What’s Past Is Prologue”: 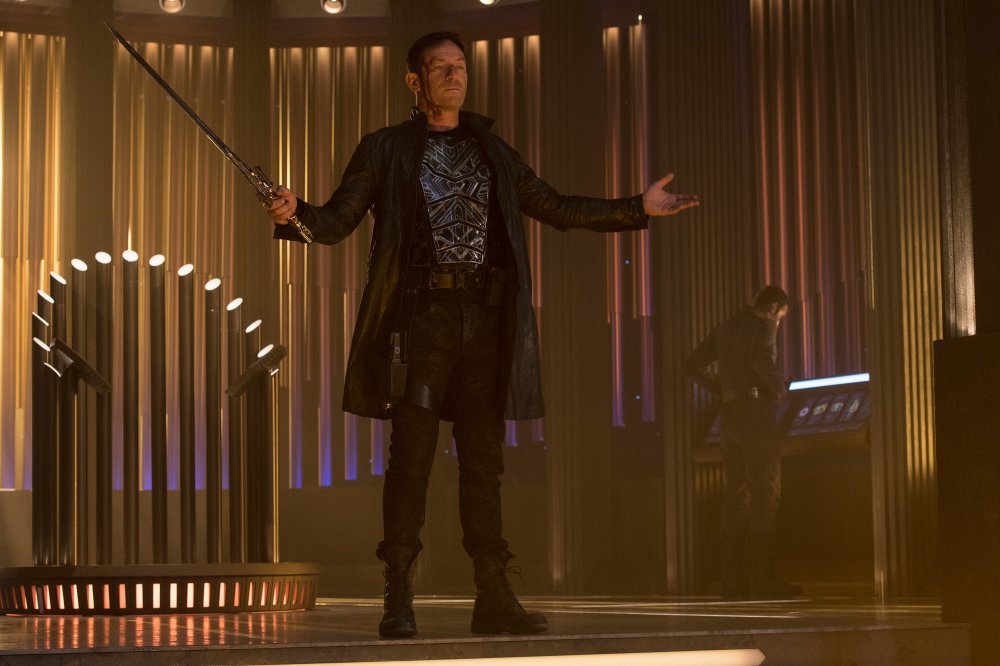 While he got a big, grand and suitably epic death, Jason Isaacs is just so damned wily and charismatic that I really hated to see him go.  I was also disappointed to see this very clever character devolve at the last moment into a typical action movie bad guy. 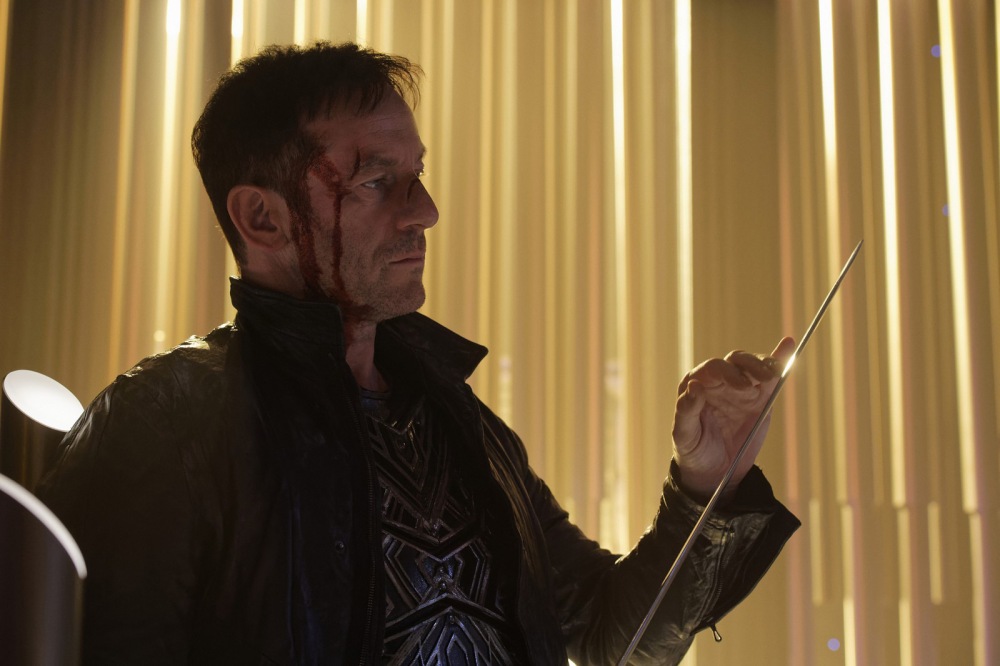 This was a character who, despite his mirror-universe ‘barbaric’ nature, was able to successfully infiltrate and even thrive within the prime universe for months (something that Spock once implied was pretty much impossible for mirror-universe barbarians in TOS’ “Mirror, Mirror”).

^ I also wonder if there is still a prime-universe ’nice guy’ version of Lorca out there somewhere as well.  I think that not revealing the fate of prime-Lorca was a serious missed opportunity for the series.

*  A thick patch of technobabble.

Lt. Stamets and Cadet Tilly were technobabbling so hard that I was getting a bit cross-eyed.  In Star Trek, I accept that technobabble is a necessary means to an end, but it was really laid on thick here.   In fact, it went on so long that it really started to call attention to itself.  Technobabble is best used as a spice, not an entree.  But serious kudos to Mary Wiseman and especially Anthony Rapp for making it sound like a second language to them.   Couldn’t have been easy…

*  Where the ship winds up…

Once again, another ‘lost in space’ climax, though now they’re lost in time.   Stamets’ spore drive placed them at the correct spatial coordinates, but nine months after they were thrown into the mirror universe; and it seems he Federation has lost its ongoing war with the Klingons.

I realize that this revelation was supposed to have elicited a ‘wow’ moment with the audience, but I was nonplussed.  It felt waaaayy too similar to the climax of last year’s “Into the Forest I Go” midseason finale .   Only a few episodes after “Into the Forest…”, and the show seemingly uses that same ending yet again.   Too soon….

^ And by the way, whatever happened to the mirror-Discovery that was spore-jumped into the prime universe?  Where are they?   Did they make it back to their mirror-universe at the same time?

Now, unless the Discovery crew can time travel or spore-jump their way out of this mess somehow, I suspect that Discovery is indeed set in another pocket of Star Trek’s infinite multiverse and not TOS’ ‘prime’ universe.  Personally, I’m okay with that, since I believe that all all of Star Trek’s ‘history’ diverged after 1996’s “First Contact.”

But what I find frustrating is the writers’ continuing insistence that Discovery is set in the prime universe of TOS and TNG.   In Captain Kirk’s Star Trek (only ten years later), there had never been an all-out war with the Klingons.  Minor skirmishes, border disputes, trade embargoes, etc.   But never an all-out war; and certainly not one that the Federation had lost.   Discovery is supposed to be a prequel to the original series.

Again, this is my headache with prequels in general.

“What’s Past Is Prologue” is an exciting wrap-up to the mirror universe arc (which ended a bit prematurely, in my opinion).  It has epic action, some clever bits of writing, and truly terrific character moments.   “What’s Past…” is a great episode, but not without flaws; that conclusion could be very problematic in the greater tapestry of Star Trek.

That said, there is plenty of time to turn things around as there are still two episodes to go till the end of the season.

A lot can happen in that time, so let’s see how it goes…